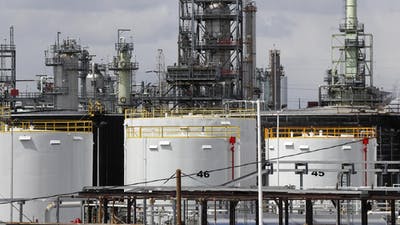 Top officials in the Biden administration and leading Democrats on Capitol Hill are now calling for a ban on Russian oil and gas imports, a move that members of Oklahoma’s congressional delegation generally support and, in some cases, have been advocating for weeks.

U.S. Secretary of State, Antony Blinken, told CNN that the United States is talking to allies about “the prospect of banning the import of Russian oil while making sure that there’s still an appropriate supply of oil on world markets." At the same time, Democratic Speaker of the House, Nancy Pelosi, informed colleagues that the chamber is “exploring” legislation that would do the same.

The U.S currently imports about 672,000 barrels of crude and refined petroleum products daily from Russia, which represents about 8 percent of total U.S. imports. The majority of the 200,000 barrels of crude oil go to refineries on the west and east coasts, which are not connected by pipelines to crude oil hubs in the central part of the country, including Cushing, OK.

European nations, however, are far more dependent on Russian oil, which is the primary reason the Biden administration was trying to avoid sanctions on Russian energy, as that would further disrupt the global energy market. However, by the end of last week, the administration said a ban was on the table.

“It’s something the administration is looking at very seriously,” said Senate Majority Leader, Chuck Schumer, based on a conversation he had with President Biden’s Chief of Staff.

In interviews last week, Oklahoma members were calling on the administration to add a ban on Russian oil to the growing list of sanctions. The sanctions are aimed at hobbling the Russian economy and forcing President Vladimir Putin to end his invasion of Ukraine.

“Because all we’re doing is feeding the beast, so to speak,” said Rep. Tom Cole (R-OK4), “we’re feeding his war machine that we’re watching in action right now in Ukraine.”

“Clearly Putin is using income from oil and gas to be able to murder his neighbors,” said Sen. James Lankford. “We shouldn’t facilitate that, we should find a way to be able to cut that off.”

Of course, banning Russian oil would likely only send crude oil prices higher, which will increase the pain Americans are already feeling at the pump. The average price for a gallon of gas nationwide has now exceeded $4.00 for the first time since the 2008 recession. Still, it's a price that many feel we need to be willing to pay.

“How about we cut [imports] off immediately,” said Rep. Markwayne Mullin (R-OK2). “We say, ‘Hey we are not spending another dime with you, don’t send another ship here. Stop--we’re gonna put our people to work.’”

That’s what Oklahoma members want to see as part of the ban: a renewed commitment from the Biden administration to domestic energy production, so that Russia’s leverage over the West is not as great in the future.