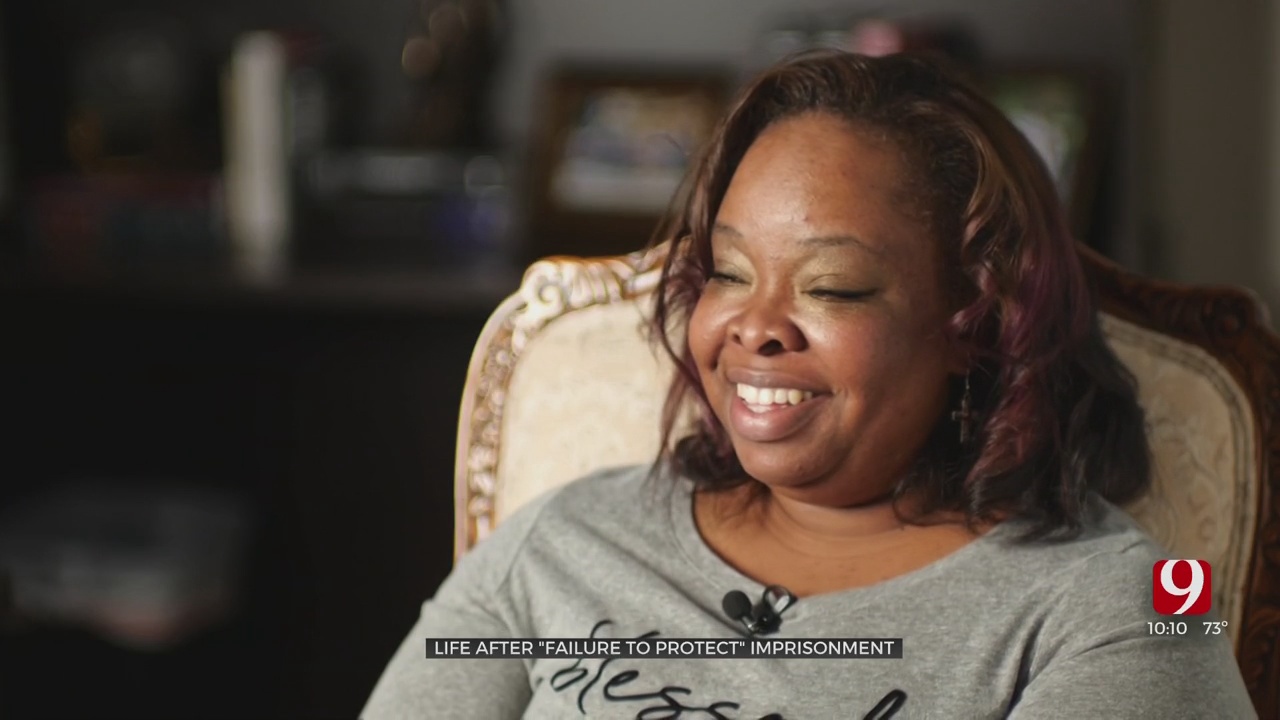 In 2019, Governor Kevin Stitt pardoned Tondalao Hall and momentum was growing to change the law that put her in prison.

Now, after two years of freedom we check back in with her and look into what's happened to the state's law on Failure to Protect.

Tondalao Hall was supposed to spend 30 years behind bars for failing to protect her two young children from their father's abuse. The abuser, Robert Braxton, received time served and never spent a day in prison.

The case put the spotlight on Oklahoma's failure to protect law and attracted national attention including from CBS News' 60 minutes.

Sharyn Alfonsi: “And what's going through your mind when they say 30 years?”

Turns out, it was not. Governor Stitt pardoned Tondalao, or Toni, as her friends call her and in November 2019 she walked out of prison and into the arms of her children.

Today, she's a licensed cosmetologist, a skill she learned through the RISE program in prison.

Great Clips immediately gave her a job when she got out. Toni is now assistant manager and working towards her master’s in cosmetology. She's been there for the major milestones, like two of her kids’ graduations, she became a grandma. and even has a new baby herself.

“Some days I’ll be driving down the street and I’ll just start crying,” Toni told us. “I’m just thankful to be out. I’m not supposed to be out until 2043 and I’m out. And God has really blessed me.”

Admittingly, however, adjusting to life on the outside has been difficult.

“Like I have to ask people to help me with doing the email,” she laughs.

On a more serious note, as a felon she found it hard to find a place to rent and connect with resources to help her.

“As an ex-offender it gets frustrating.”

Still, she has no bitterness for the system. Only resolve to change it.

“The time behind that law is just too much,” she says shaking her head. “Too much.”

Sharyn Alfonsi: With the enabling child abuse laws you can serve up to a life sentence. That's how broad-- that is right now, the sentencing. Does that sound right to you?

Kevin Stitt: It doesn't. It sounds-- it sounds too long. And-- and that's some of the things that we wanna-- we wanna address in our state.

But, in the two years since Toni has been out of prison nothing has changed in the law.

“Absolutely not and we have seen no indication the way the law is used has changed at all,” says Megan Lambert, Toni’s attorney and an attorney for the ACLU of Oklahoma.

On the same day we interviewed Toni, Rebecca Houge was being sentenced in Cleveland County after her former boyfriend killed her son. Prosecutors were asking for a life sentence.

In 2019 when Toni's case was in the headlines, a bipartisan bill in the legislature would have added provisions in the law for victims of domestic violence and reduced sentencing maximums. But supporters say it lost momentum when the District Attorney's Association opposed it.

“We support a law that protects children is the bottom line,” says Matt Ballard the current president of the District Attorney's Association. He's also the Rogers County District attorney and points to a case in his own county where two grandparents were charged with failure to protect after their two 9-month-old granddaughters, that they watched all the time, were found starving to death.

He says cases like this, or worse, demonstrate the need for maximum sentences.

“Because there are so many ways that the crime can happen. You need that wide range of punishment.”

But like Toni, in Oklahoma approximately one in four women received longer sentences than the abuser.

Lambert says according to their research, 93 percent of failure to protect convictions are women. In the other 7 percent, men were charged as well.

When asked if there has even been a case where the man was convicted of failure to protect and not the woman, Lambert said “Not in Oklahoma”.

Ballard counters men are simply more likely to be the abusers.

“Ultimately from a DA’s perspective, we’re going to hold the person accountable who let this child down,” he says.

He adds it's ultimately up to the judge and jury.

But while in prison, Toni says she knew many women sentenced under the failure to protect law. Many are still there. She keeps in touch with some of them, fully understanding the blessings of her circumstances and she tries every day to be an example of what she says they all could be.

A spokesperson for the Governor says Failure to Protect is still on his radar, and part of a larger effort to realign sentencing guidelines in the state.