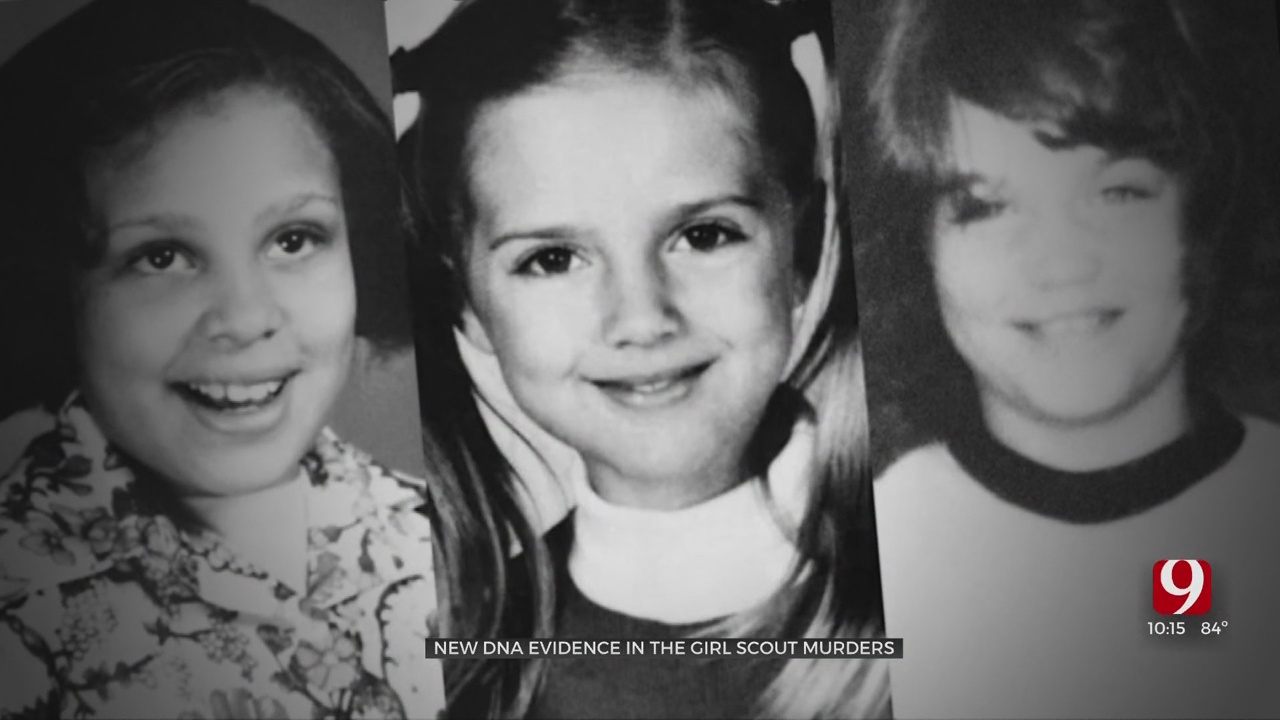 The Girl Scout murders have haunted Oklahomans for 45 years but, investigators now say recent DNA testing done by the Oklahoma State Bureau of Investigation points to one killer and rules out every other suspect ever brought up.

It was 1977, when three young campers, Lori Farmer, Michelle Guse and Denise Milner were raped and murdered in Mayes County and even though a suspect was arrested and tried, he was also acquitted and that has led to questions and wild conspiracy theories ever since. But, the families' search for justice has never ended.

Nine years ago, Lori Farmers' parents sat down with current Mayes County Sheriff Mike Reed and asked him to take a new look at the case and give it a fresh set of eyes. They had no idea what he and OSBI agents would uncover. Reed's search for the truth took him down a road filled with anger, sadness and sleepless nights, but also, answers.

And even though these answers may bring some measure of peace for the families, there will never be closure.

"There ain't nothing about this whole thing that is peaceful. It is evil from the get-go. You have babies, eight, nine and ten year old babies, innocent, that were beat to death and sexually assaulted,” said Reed.

Reed says through his investigation he tried to find probable cause to prove someone else committed the crime.

A request turned into an unexpected nine-year mission to find out the truth about what happened to the Girl Scouts who were raped and murdered at Camp Scott and put an end to the hundreds of conspiracy theories.

On June 12th, 1977, 8-year-old Lori Farmer, 9-year-old Michelle Guse, 10-year-old Denise Milner set off for camp, but never came home. There was an arrest, a trial and a acquittal and ultimately, remained unsolved.

Sheriff Reed grew up in Mayes County and was just a boy when the murders shocked the conscience of the small Locust Grove community. He never imagined years later he would be the one asked to find answers.

“When I give my word that means something to me. I gave them my word. I didn't know what I could do but I'd look at it,” said Reed.

A year after Reed started looking over the case, he and OSBI agents went to the National Center for Missing and Exploited Children in Virginia where 23 of the best homicide investigators and FBI Behavioral analysts and FBI profilers in the world, make up a cold case board and they all independently combed through every document and every piece of evidence. After a month, each and every one of them had come to the same conclusion, the only person to commit these murders was Gene Leroy Hart.

"I think all those people working together and coming to a conclusion was really one of those moments for us. That those people who don't live in Oklahoma, don't have any thought about who it should be, arrived at the same conclusion Mike already had,” said Sheri Farmer.

Sheri Farmer finally let herself believe they would get to the truth when agents suggested to Reed and OSBI to have some of the evidence re-tested for DNA. That testing would cost $30,000, money the sheriff's office didn't have, but citizens in Mayes County stepped up and raised every penny of it and that evidence was tested in 2019 and the results have not been released until now.

"Every person that was looked at as a suspect, there is not a piece of DNA that we have not been able to identify,” said Reed.

Reed says all the DNA from the scene matched the three girls and Hart. Hart was an escapee on the run, when he was arrested for the murders in 1978 after a ten-month long man hunt but a jury found him not guilty in 1979. But DNA evidence was not available then, plus, Reed's conclusions go far beyond DNA.

“If there absolutely was no DNA, whatsoever, just the information that I know now, that was not allowed to be shown to the jury, there is absolutely no doubt whatsoever, Gene Hart is the person who committed these crimes,” said Reed.

Sheriff Reed says not only is it frustrating Hart was acquitted. He says that frustration began in 1966, when Hart kidnapped two pregnant women at gunpoint, drove them to the middle of nowhere in Mayes County, tied them up, raped them repeatedly, covered them in brush and left them for dead.

“The aggravation is this, you do that, you are convicted of that, and you are paroled in two and a half years and back out on the road. I see a problem with that. That's the frustration,” said Reed.

Another frustration over the years, is Reed says he gets at least one phone call a month from someone saying they know who the killer is and there are plenty of people going on social media, spouting theories with no truth to them.

"I heard it forever when I was growing up, oh they just looked at one person. Really? I can show you documentation of 139 people OSBI interview and looked at as a possible suspect in this. People don't want to hear that, or they've never heard that,” said Reed.

Reed says one of the big myths people have bought into is, there were two different knots used to tie up the girls, which would mean two people were involved, but Reed says he's proven that to be false. He said the two knots were technically the same.

After all of his research and going through the evidence over and over, he says he can disprove every wild theory out there with actual facts, except, one thing, which is—there may have been someone involved after the fact because of a bloody footprint found in one of the tents, but he believes it's logical to assume that was someone innocently walking into the scene.

“It is very very probable in my opinion that they could have stepped in there and realized oh my gosh, I've got blood on my shoes. I don't know that. I am not accusing them."

He says there's only one reason, he's devoted years to this case and that is to get answers for the families of those little girls. And that means everything to Sheri Farmer and her husband Bo, who are grateful to Reed, the OSBI agents and all the others, who have finally given them the truth.

"It was gradual. You know because he kept us informed the whole time. So, he would tell us this is what I've discovered about this scenario, and I think he went into it very open minded. He did not have a preconceived notion, said Farmer. "Bo and I both are at peace about it, as we've learned these things a little at a time. It does bring us peace. And it does bring us a better understanding of all that happened that night."

She says all the families have grieved in their own ways and despite many joyous moments through the years, one piece has always been missing from their lives. Sherie focused on victims' rights and never stopped needing answers, for all the families.

"Mike is one of those people. As I've told him, you are family now. And he has been a huge part in bringing all of these pieces together and giving us some resolution. Going through our grief, there was a focus. And the focus was there will be justice for Lori and Michelle and Denise,” said Farmer.

Gene Leroy Hart died in prison a little more than two months after being acquitted in 1979, from a heart attack. Hart was in prison for another crime.

News On 6 at Noon Newscast (December 6)