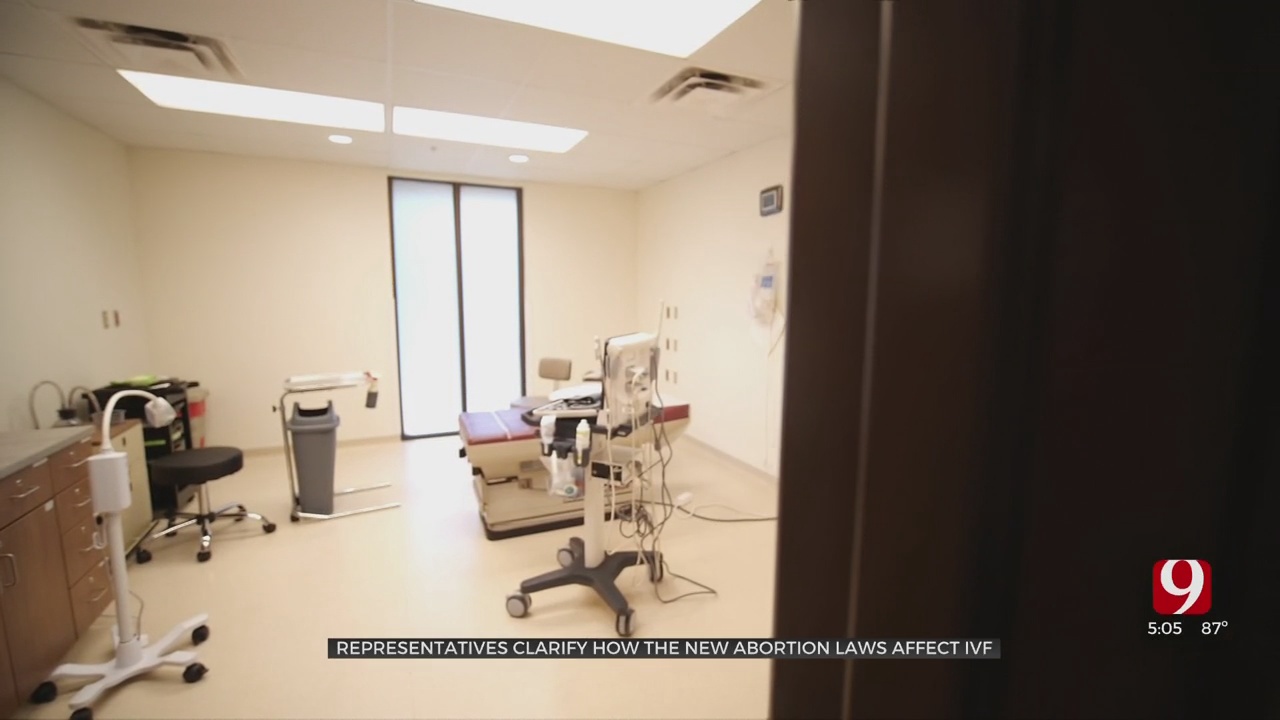 Oklahoma is home to the strictest abortion ban in the nation. While on the floor, state lawmakers who opposed the bill said it could call into question fertility treatments such as in vitro fertilization.

State representative Wendi Stearman, the new law's author, answered questions on how those fertility treatments would work in conjunction with the law in addition to where they could clash and how the law will be enforced.

"The moment the two join together the child is created," Rep. Stearman said as she answered questions while on the House Floor.

Lawmakers who oppose the new law wanted answers on how it would affect treatments like IVF.

"It was not even a discussion to limit IVF ever. That was brought up on the floor, but it was never a concern," Rep. Stearman said.

While the law doesn't mention IVF, it defines an unborn child as “a human fetus or embryo in any stage of gestation from fertilization until birth” in the bill.

The confusion comes from the process of IVF which fertilizes eggs for implantation. The eggs are then stored for potential future use. When a person or family is done having children, per the Mayo Clinic’s website, “you might be able to donate unused frozen embryos to another couple or a research facility. You might also choose to discard unused embryos."

"It doesn't necessarily address all areas of life before birth. It has very limited application," Rep. Stearman said.

The representative said an abortion is defined in this specific bill as the termination of a pregnancy, not what happens in a lab.

However, the Mayo Clinic said pregnancy terminations can also occur in those who use IVF if too many eggs implant which is called fetal reduction.

"You're getting down into details that would need to be discussed with a doctor, but the bill itself is terminating a pregnancy,” Rep. Stearman said. “So, if a pregnancy is terminated, then this bill could be utilized."

She also said the exception for a life-threatening circumstance could potentially be applied, as well. There are exceptions for rape and incest if they are reported to police.

Statistically, only about a third of assaults are reported, according to the Rape, Abuse and Incest National Network. For every 1,000 sexual assaults, only about 300 are reported.

"I am concerned if someone who behaves in this situation does not get reported and is not held accountable. That is a major concern. My hope is this will actually encourage reporting,” Rep. Stearman said.

Clinics are also concerned people who miscarry could be targeted because they're suspected of having an abortion.

While the law doesn't allow for legal action against the pregnant person, but the person who performs, aids, or abets in the procedure can face a civil lawsuit by anyone. They would have to get an attorney to find out how that suspected pregnancy ended, who performed or helped with the procedure.

Emergency contraception like Plan B is still legal under House Bill 4327. The bill also states the procedure is not an "abortion" as defined in the law if it saves the life or preserves the health of the fetus, to remove a fetus that's no longer alive, or to remove an ectopic pregnancy.