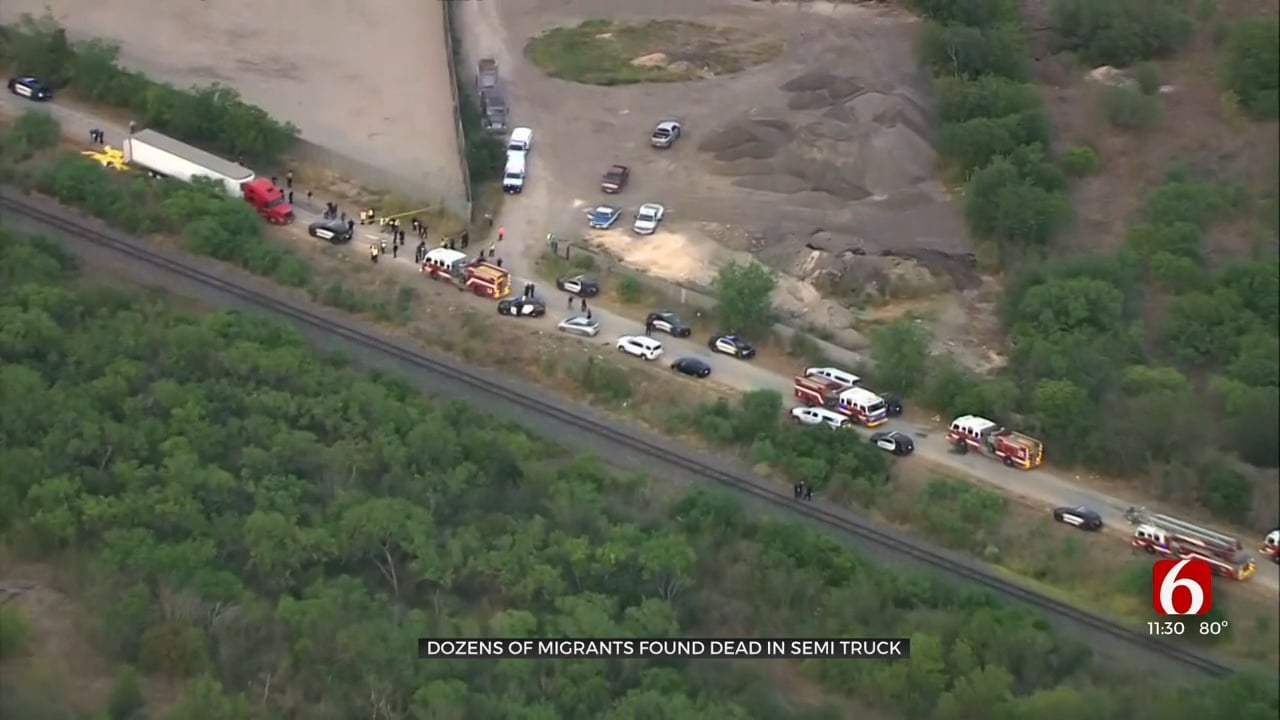 Drowned in the Rio Grande. Murdered in Mexico. Perished in the Arizona desert. For migrants traveling to the United States, the journey has always been full of peril.

A tragic reminder came this week when 50 people died after being abandoned in the back of a tractor-trailer in sweltering San Antonio, Texas. Authorities believe the vehicle was part of a human smuggling operation.

While the scale of the calamity was shocking, it’s only the most recent example to illustrate how U.S. officials have struggled to find the right strategy for patrolling the border and preventing deaths.

Lax enforcement can encourage more people to travel north in hopes of a better life. But clamping down is not always a deterrent. Instead, migrants may rely on riskier routes to avoid detection, or put themselves in the hands of smugglers who promise that they can evade authorities for a price.

Related Story: 46 Migrants Found Dead In Back Of Tractor Trailer In San Antonio

Meanwhile, immigration policy is trapped in partisan stasis in Washington. The tragedy in San Antonio seemed more likely to lead to another round of political finger pointing than any change in policy.

President Joe Biden, in Europe this week for international summits, said the deaths were “horrifying and heartbreaking.”

“While we are still learning all the facts about what happened and the Department of Homeland Security has the lead for the investigation, initial reports are that this tragedy was caused by smugglers or human traffickers who have no regard for the lives they endanger and exploit to make a profit,” he said in a statement.

Biden added, “Exploiting vulnerable individuals for profit is shameful, as is political grandstanding around tragedy, and my administration will continue to do everything possible to stop human smugglers and traffickers from taking advantage of people who are seeking to enter the United States between ports of entry.”

The migrants were discovered on Monday when a city worker heard a cry for help from the abandoned truck that was parked on the side of a back road. Dozens were already dead; more died at nearby hospitals.

“This is nothing short of a horrific human tragedy,” Nirenberg said.

It also became a moment for fresh political attacks.

“These deaths are on Biden,” Texas Gov. Greg Abbott, a Republican, tweeted within hours of the grisly discovery. “They are a result of his deadly open border policies. They show the deadly consequences of his refusal to enforce the law.”

Many of former President Donald Trump’s strict border policies — including Title 42, which prevents many migrants from seeking asylum during the public health emergency caused by the coronavirus — have remained in place under Biden, who is a Democrat.

Aaron Reichlin-Melnick, policy director at the American Immigration Council, suggested it was rigid, not lax, enforcement that contributed to the tragedy.

“With the border shut as tightly as it is today for migrants from Mexico, Guatemala, Honduras and El Salvador, people have been pushed into more and more dangerous routes. Truck smuggling is a way up,” he wrote on Twitter.

White House press secretary Karine Jean-Pierre told reporters aboard Air Force One — as Biden was flying between summits in Germany and Spain — that the administration was focused on the victims and holding human smugglers accountable.

“The fact of the matter is, the border is closed, which is in part why you see people trying to make this dangerous journey using smuggling networks,” she said. “Our prayers are with those who tragically lost their lives, their loved ones as well as those still fighting for their lives. We’re also grateful for the swift work of federal, state and local first responders.”

Deaths became commonplace on the border after “Operation Gatekeeper,” launched in 1994, pushed migrant traffic to the Arizona deserts from San Diego. Despite billions of dollars spent every year on border security since then, neither Republican or Democratic administrations have been able to stem the loss of life.

Migrants routinely take risks to cross into the United States.

Jose Castillo, 43, left Nicaragua with his wife and 14-year-old son in January but didn’t cross the Rio Grande in Eagle Pass, Texas, until May, paralyzed with fear that they would drown. He and his wife finally decided that one of them could die, as long as their child made it safely. They took a chance — and it worked.

“We can never return to Nicaragua,” he said.

Under Trump and Biden, Border Patrol agents have been stretched extremely thin because they spend long stretches of time processing cases for immigration court. Such responsibilities take them out of the field, making it easier for people to cross undetected. The Border Patrol recently began releasing tens of thousands of migrants on parole in hopes of freeing up more agents to be in the field to try to stop migrants.

The number of people found crossing the border illegally is at or near the highest in about two decades. Decisions to migrate are complex, but it could be that many people are getting through undetected and encouraging others to come. Migrants who succeed sometimes tell their stories to family and friends back home, encouraging them to follow.

At the same time, Title 42 has encouraged repeat attempts to cross the border because there are no legal consequences, such as criminal charges or records of deportation, for getting caught. Many people cross several times until they succeed.

It’s unclear whether any of the migrants who died in San Antonio had previously been expelled.

Isis Peña, 45, fled Honduras with a friend, who urged her to cross the border illegally. Peña refused but began to regret her decision after the friend soon called from San Antonio to say she made it easily and U.S. authorities didn’t even ask her any questions before getting released.

The next day, Peña tried to cross. Although she made it across the river, she was expelled to Mexico under Title 42 authority.