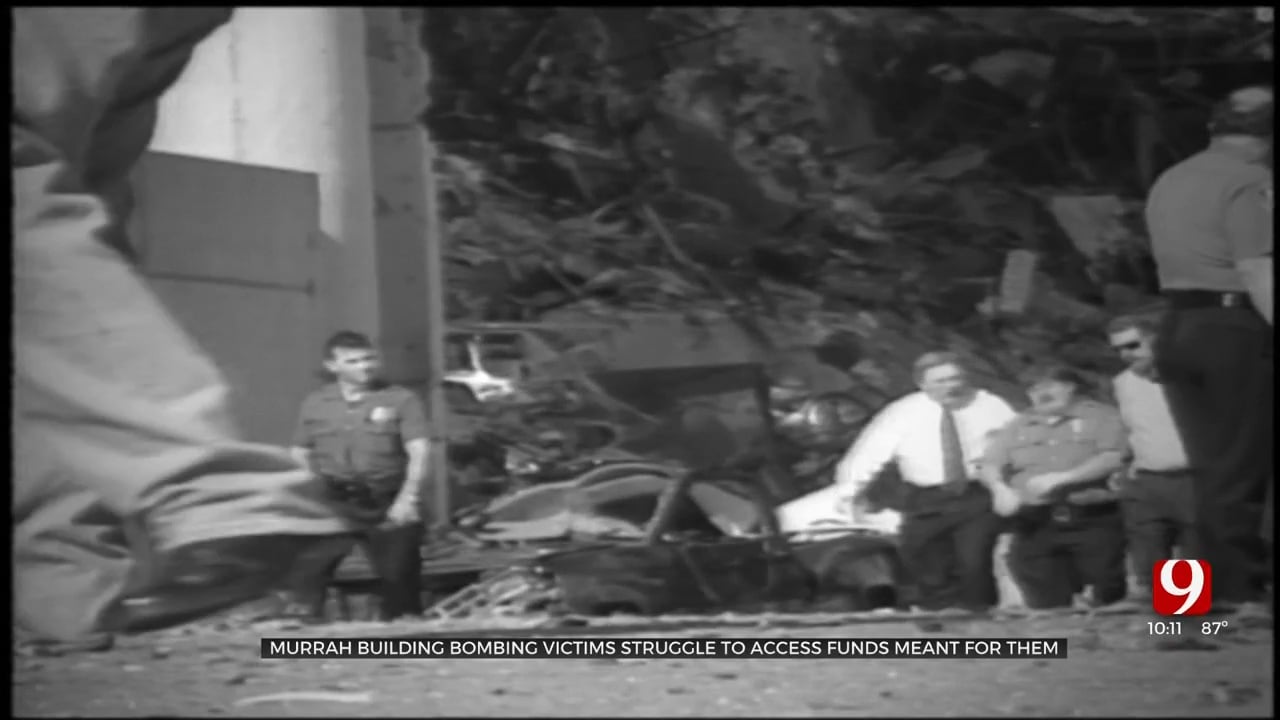 Millions of dollars still sit in a bank designated for victims of the Oklahoma City bombing. These are donations that were set aside in 1995 to help the bombing victims and their families. But those same victims say getting that money continues to be difficult.

A decade ago, it was revealed there was still $10 million in the fund even though victims said they were told there was little or no money left.

Back then, the fund received national attention and was audited.

Three years later Trustees from the Oklahoma City Community Foundation voted to move the money to a private trust, which doesn't have to reveal how much money is in the fund. who is getting it, or how much they are charging to manage it.

“When you donate trying to help someone you assume the money that you’ve given them is going towards their needs,” says Deloris Watson who is the main caregiver for PJ Allen, the youngest survivor of the bombing. “You don’t assume that they’re going to have to fight, struggle.”

But Watson says for all of PJ's life it has been a struggle to access those funds donors sent in.

All the Victims we talked to say the Red Cross and Salvation Army provided invaluable help whenever they needed it. But they say they continue to have problems with money put into the Oklahoma City Disaster Relief Fund -- originally managed by the Oklahoma City Community Foundation and now in the private investment firm: InvesTrust. InvesTrust's CEO says the company took over management of the money after the Disaster Relief fund was dissolved in 2015.

We tried to interview someone from OCCF about this decision but instead they provided us with a document explaining in part. 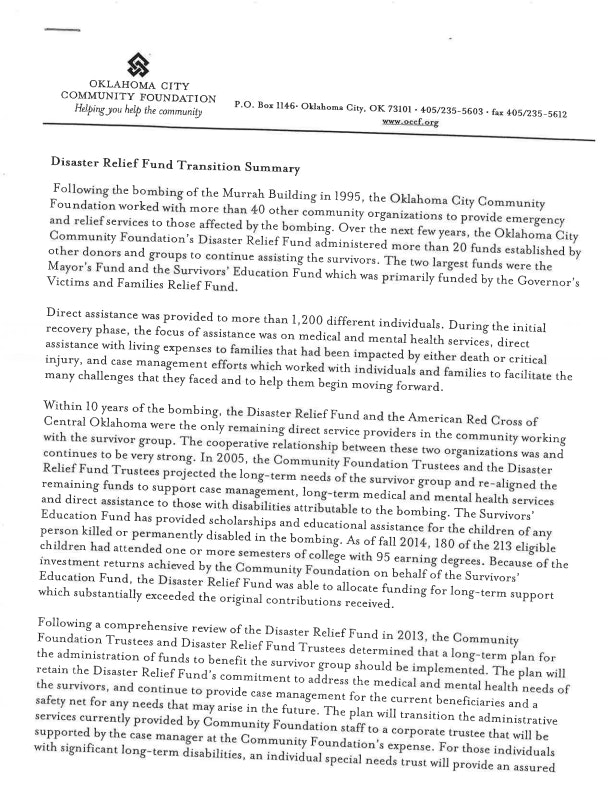 "This plan is designed to deal with the long-term needs in an efficient and effective way."

According to OCCF, there are five individual special needs trusts for children who suffered lifelong effects from the bombing. The rest of the money is in what 's called a Pot Trust - where other bombing victims may be eligible for assistance. The Oklahoma City Community Foundation pays a full-time social worker. According to an OCCF spokesperson once she sees a need, she then goes to InvesTrust who manages the money.

PJ received one of the trusts. Deloris says it was $600,000. Still, she says trying to get that money for medical expenses is exhausting and cumbersome.

Falesha Joyner lost her ear and was badly injured in the bombing. Her mother, young niece, and nephew were all killed. When we spoke to her in 2012 she told us fund managers with OCCF refused her requests for help.

“She told me that the funds had been depleted and that’s something that hurt me so it stuck with me,” she said back then.

“Bombing related. What does that mean? For me it means physically, mentally, emotionally, and financially. And that’s everybody’s life however you were affected.”

InvesTrust says sixty people directly impacted by the bombing are currently benefiting from the trust. Felisha isn't one of them.

“I don’t get any help. I don’t hear from them or anything.”

“It’s problematic as a hypothetical that victims are still waiting for millions of dollars,” says attorney Kenneth Feinberg. Feinberg says he doesn't know about the legality of the Oklahoma City Disaster Relief fund specifically. He can only contrast it to the programs he's administered: the 9-11 fund, the Boston Marathon Bombings, and the shootings at Virginia Tech, the Aurora Colorado movie theatre, and Pulse night club.

“In all of these programs, everyone, money comes in, claims are processed and money is distributed directly to the victims and their families withing 60-90 days.”

Deloris, Felisha and other victims we talked to off-camera maintain that's what they want: to see money divided up and distributed. For them to decide for themselves how to use it.

“I just can’t imagine someone wrote a check and said ‘Now I want you to monitor this money very, very closely and make sure these people don’t get what they are asking for. I want you to put some restrictions on there’,” says Deloris.

When we asked the Oklahoma City Community Foundation for an interview, they referred us to InvestTrust. InvesTrust's CEO Mark Williams provided us with written answers to our questions but also wouldn't do an on-camera interview. His answers are in blue.

InvesTrust is the trustee for a group of trusts established from the proceeds of the Disaster Relief Fund which was dissolved in 2015.

How much money is in the fund?

There are a number of individual trusts which are all private; we cannot provide the value of the trusts.

What does InvesTrust charge to manage the fund?

Since InvesTrust won the privilege of managing these trusts in a competitive process, and we are privately owned, it would not be proper to give our pricing structure to current and future competitors. Oklahoma City Community Foundation (OCCF) provides a fulltime social worker that is paid for by OCCF and not by the trusts.

How many people received trusts that you manage? How much is each individual trust?

What is the process for victims in getting money from their trusts? What are the guidelines?

All of the trusts are “special needs trusts” and the trust documents provide the guidelines. Beneficiaries are those that were directly impacted by the 1995 bombing and had received assistance prior to the establishment of the trusts. The social worker previously mentioned reviews all need requests and makes recommendations to InvesTrust.

How was InvesTrust chosen to manage the trust?

An RFP was issued to multiple firms and InvesTrust was chosen based on its proposal.

What happens to the money in the trust if one of the survivors passes away?

Any funds remaining in a specific trust will revert to another larger trust that benefits a number of people.