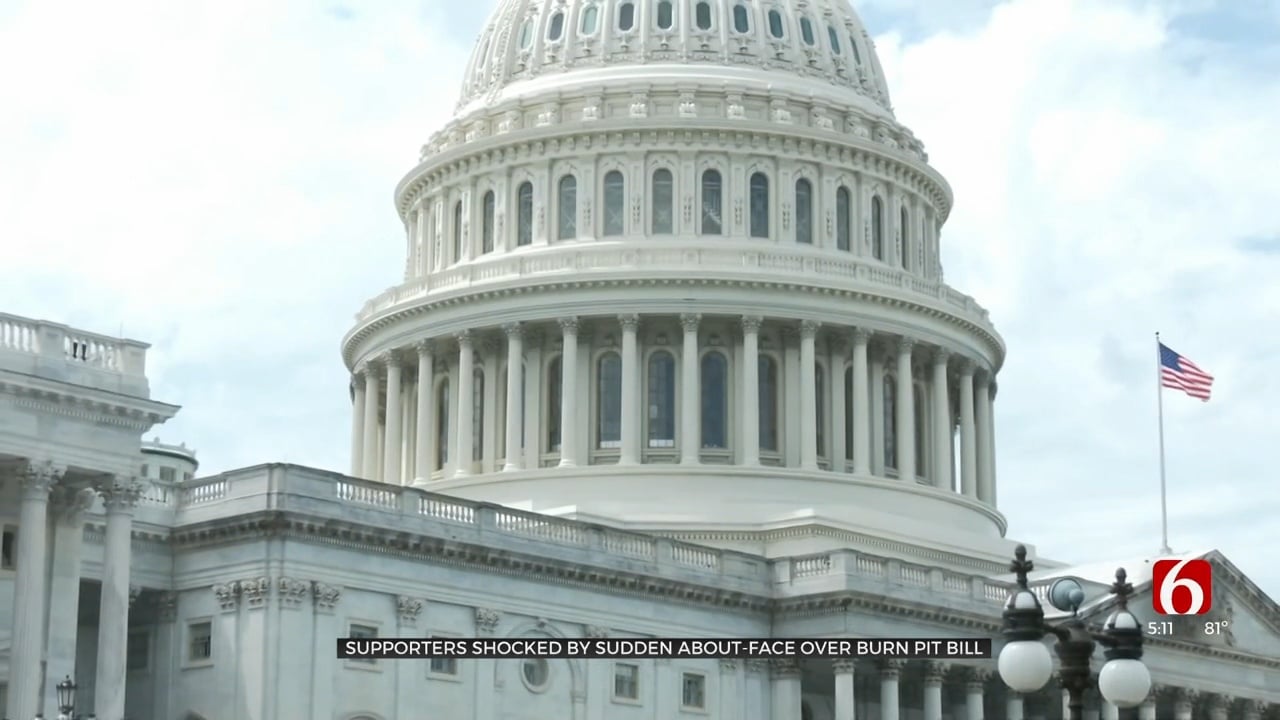 Many post-9/11 veterans are angry and in disbelief after dozens of Republican Senators — including one of Oklahoma’s — did an about-face this week on a bill to expand health care to those exposed to burn pits during their service.

The Promise to Address Comprehensive Toxins (PACT) Act easily passed the Senate in June by a vote of 84-14. It had overwhelming bipartisan support in the House, as well, but a clerical error discovered in the bill required that make a second pass through the Senate -- and on Wednesday supporters of the legislation were shocked to discover that most of the Republican support had vanished.

"Vietnam veterans, Gulf War veterans, post-9-11 veterans, what we all have in common today," Tom Porter, a veteran of the war in Afghanistan, "is we all just got screwed by 41 senators."

At an impromptu news conference Thursday, called by Porter and others who had been expecting to be celebrating, comedian Jon Stewart, a long-time advocate for the cause, had a message for the senators who voted no.

"You don't support the troops. You support the war machine. That's all you care about," Stewart fumed. "These people thought they could finally breathe. You think their struggles end because the PACT Act passes? All it means is they don't have to decide between their cancer drugs and their house."

At a cost of about $280 billion over 10 years, the bill would expand eligibility for VA health benefits by now presuming that certain illnesses were caused by exposure to toxic burn pits, instead of requiring veterans to conclusively prove the connection. It’s estimated that currently about 70% of such claims are denied.

Democratic senators were incredulous at the GOP turnabout.

"How does this happen?" asked Sen. Kirsten Gillibrand (D-NY). "How do you change your mind right when you're about to make a law that's going to save lives?"

What happened is Senator Pat Toomey (R-PA) continued to raise concerns about what he claims is a 'budget gimmick' in the bill -- classifying it as mandatory spending rather than discretionary -- which, he said, would allow Democrats to spend billions more dollars on other unrelated issues.

Sen. Toomey said his concern has nothing to do with the main thrust of the bill -- helping veterans -- but he intended to block its passage until the spending classification was changed.

Oklahoma Senator Jim Inhofe, who stated he was proud to support the legislation following its original approval in June, took Toomey's position and voted against passage Wednesday.

An Inhofe spokesperson Friday stated, "Sen. Inhofe and a number of his Republican colleagues voted no because they would like to see a fix to the mandatory spending issue Sen. Toomey has been outspoken about before they pass the PACT Act again."

Senator Lankford, meanwhile, has been a no vote all along, objecting primarily to the new institution of a presumption that an illness is service-related.

"[T]his bill would remove the science of presumptions and greatly lengthen the waiting period for all veteran care,” said Lankford in a statement following his vote in June. “This bill will add more delays to service-connected veteran care by increasing care requirements for complications that may not be service-connected.”

Senate Majority Leader Chuck Schumer (D-NY) has said he plans to bring the bill up again on Monday.