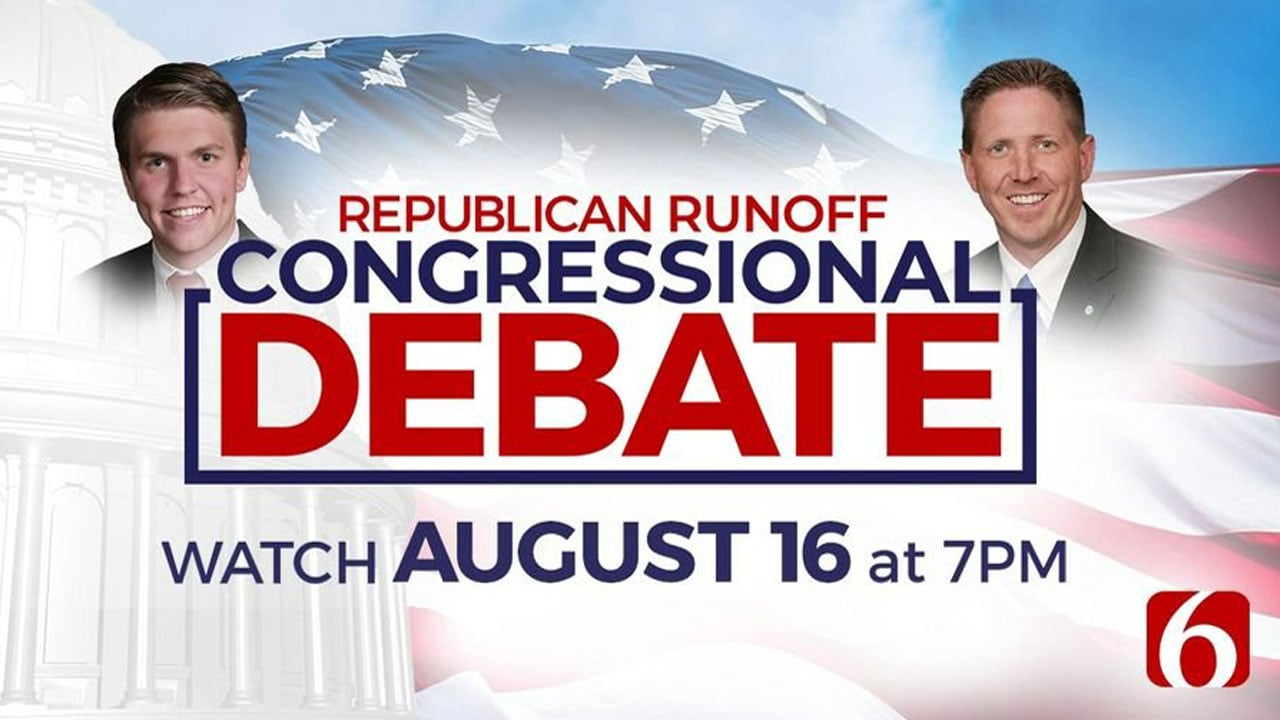 Brecheen and Frix are hoping to win their party's nomination and advance to the general election Nov. 8, in hopes of succeeding Rep. Markwayne Mullin, who is running for U.S. Senate.

Much of the debate centered on Frix's contention that Brecheen is a "never Trumper," meaning somebody who did not support former President Donald Trump. However, Brecheen countered by noting social media posts indicating his public support for the former president and an endorsement from the MAGA Institute. Brecheen argued that voters should consider that how a candidate campaigns, they'll also govern.

However, aside from that, the two candidates largely agreed on most issues, taking the opportunity to point out differences between their perspective and that of Democrats.

On the topic of inflation, the candidates were asked how they would address the economy.

"We're a nation that's teetering on fiscal bankruptcy. We have a $30 trillion national debt," Brecheen said. "It takes courage to cut back."

The discussion of prices brought along the question of oil production.

"Return power and decision making back to the states. Let the states have the ability to regulate," Brecheen said.

"We have to get the federal government out of the way and allow out oil and gas companies to drill on those federal lands," Frix said.

Both candidates had a moment to describe their experience.

Brecheen talked about his background. The 43-year-old started his career cutting horses. He ran for the Oklahoma State Senate and served for eight years.

"When you work in the free market, you understand what people deal with," he said.

Frix discussed how he has served in the state legislature for the past six years. The 28-year-old, Muskogee native helps run his family's construction business.

With their years of experience, the candidates were asked what they would be willing to compromise on when working on what matters to them.

"I'm always willing to work with anybody who loves this country," Frix said. He added that he would not be able to work with anyone who considers themselves a "socialist Democrat."

"Ambition could cause you to do things that otherwise you wouldn't do. The pressure's on. But we have to love people. So the way that you influence someone is that you love them," Brecheen said.

Abortion was a topic during the debate, and the candidates agreed upon when life begins.

"The Constitution as hinged on the Declaration of Independence says we have a right to secure the right to life on the federal level," Brecheen said.

"I believe that life begins at the time of conception," Frix said.

The topic of COVID-19 brought more agreement between the two candidates.

Brecheen said he was not vaccinated and contracted COVID-19 twice, noting that he believes he's protected under natural immunity.

Referring to COVID-19 as a "Chinese virus," Frix said the decision to get a vaccine or not was an individual decision, adding that the disease was a hoax to help get Democrats elected. Frix added that he also did not get vaccinated.

Each candidate had the chance to address what they believed to be the biggest external threats to the country.

"If there's no enemy on the inside, the enemy on the outside cannot do us any harm," Brecheen said, adding that he believed China to be the biggest external threat to the United States.

"We've got to bring those manufacturing jobs back to the U.S. and be self-reliant," Frix said.

Both of the candidates then gave their closing statements.

"We've got to stand up and fight for that American dream. Fight to take our country back." Frix said. "We've got to get back to the foundation of our country, which means putting America first."

"My campaign is operating in truth. There's not something that I put out that's not true," said Brecheen.