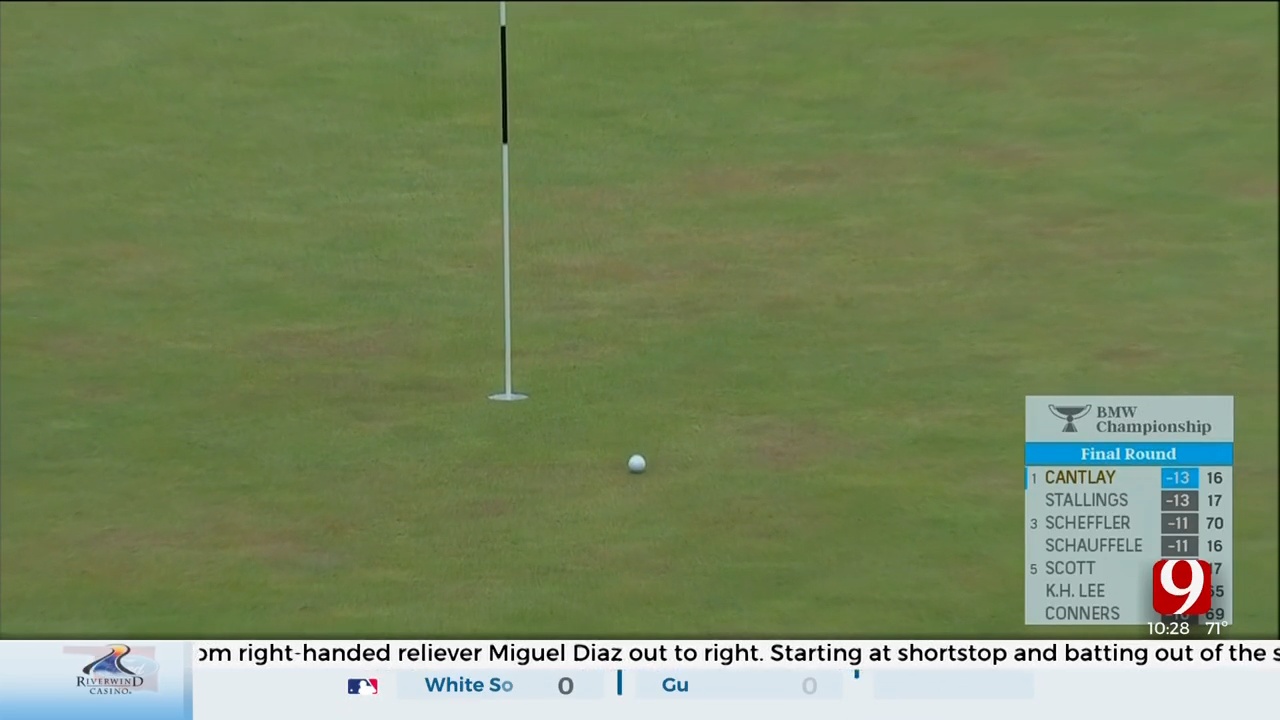 Patrick Cantlay won another thriller Sunday in the BMW Championship, getting a great bounce on the 17th hole that set up a short birdie and led to a 2-under 69 and a one-shot victory over Scott Stallings.

Cantlay became the first player to win the BMW Championship back-to-back since the FedEx Cup began in 2007. This was on a different course and he didn’t have to go six playoff holes. He also doesn’t have the FedEx Cup lead going to the finale next week at East Lake.

All that mattered was winning at Wilmington Country Club, but he needed a little help.

He was tied for the lead on the 420-yard 17th hole when he decided to hit driver, and he feared it would get hung up in a series of bunkers down the right side. But the ball landed short of the last under, took a big hop over the sand, and tumbled through the first cut and into the fairway just 64 yards from the hole.

Cantlay hit a spinner that skipped and stopped 5 feet from the flag, holed the birdie putt for the lead and then found the green on No. 18 from a fairway bunker.

A year ago, he made one clutch putt after another about an hour down the road at Caves Valley and beat Bryson DeChambeau. That gave him the top seed at the Tour Championship, which comes with a two-shot margin before the tournament starts, and Cantlay won the FedEx Cup and its $18 million prize with a one-shot win over Jon Rahm.

This time, he goes into the FedEx Cup finale as the No. 2 seed, meaning he will start next week two shots behind Masters champion Scottie Scheffler.

Scheffler put on a late charge with three birdies in a four holes and was one shot behind. But he missed a 4-foot par putt on the final hole for a 70.

PARAMUS, N.J. (AP) — Texas A&M senior Sam Bennett won the U.S. Amateur, building a 5-up lead over Ben Carr and holding on for a 1-up victory at Ridgewood Country Club.

Bennett is No. 3 in the world amateur ranking and had to get past three straight players ranked in the top 10 to reach the championship match.

Bennett was 3 up after the first 18 holes and won two more holes early in the afternoon to seize control. Carr kept chipping away and pulled within one hole with a 15-foot birdie putt on the par-5 17th.

Needing to win the 18th to extend the match, Carr missed the fairway to the right and came up short. He chipped to 8 feet. Bennett was on the green and had two putts from 12 feet to win. He lagged it to within inches for the win.

Bennett is exempt into the Masters, U.S. Open and British Open next year.

Harrington closed with a 5-under 67 at En-Joie Golf Club for a three-stroke victory over Mike Weir and Thongchai Jaidee.

The 50-year-old Irishman won the U.S. Senior Open in late June at Saucon Valley. He also has four runner-up finishes and a tie for third in 11 starts this year.

VYSOKY UJEZD, Czech Republic (AP) — Maximilian Kieffer closed with a 6-under 66 to win the rain-hit Czech Masters for his first European tour title.

Kieffer finished one shot ahead of overnight leader Gavin Green at the Albatross Golf Resort near Prague with a 16-under 200 total.

Play had been suspended for the day on Saturday after the course was flooded following heavy rain shortly after the third round started. The round resumed on Sunday with the tournament decided over 54 holes.

The first trophy for the 32-year-old Kieffer came after four runner-up finishes on the tour. He also became the first German to win a regular European tour event since Marcel Siem captured the 2014 BMW Masters in Shanghai.

Taehoon Ok closed with a 3-under 68 for a one-shot victory Bio Kim in the International Series-Korea on the Asian Tour. ... Hiroshi Iwata had a 5-under 67 for a one-shot victory over Tomoharu Otsuki in the Shigeo Nagashima Invitational Sega Sammy Cup. It was his fourth career win on the Japan Golf Tour. ... Emilio Cuartero Blanco made eagle on the 16th hole and closed with a birdie for a 5-under 67 to rally for a one-shot victory over Jeremy Freiburghaus in the Dormy Open in Sweden on the Challenge Tour. ... Phillip Price of Wales won the Irish Legends by closing with an even-par 71 for a one-shot win over Jarmo Sandelin of Sweden on the Legends Tour in Europe. ... Albert Venter had an even-par 71 and sailed to a six-shot victory in the SunBet Challenge on the Sunshine Tour in South Africa. ... Chisato Iwai closed with a 2-under 70 and won the CAT Ladies on the Japan LPGA by one shot over Miyuu Yamashita. ... Jin Seon Han had a 68 and won the High1 Resort Ladies Open by two shots on the Korea LPGA.