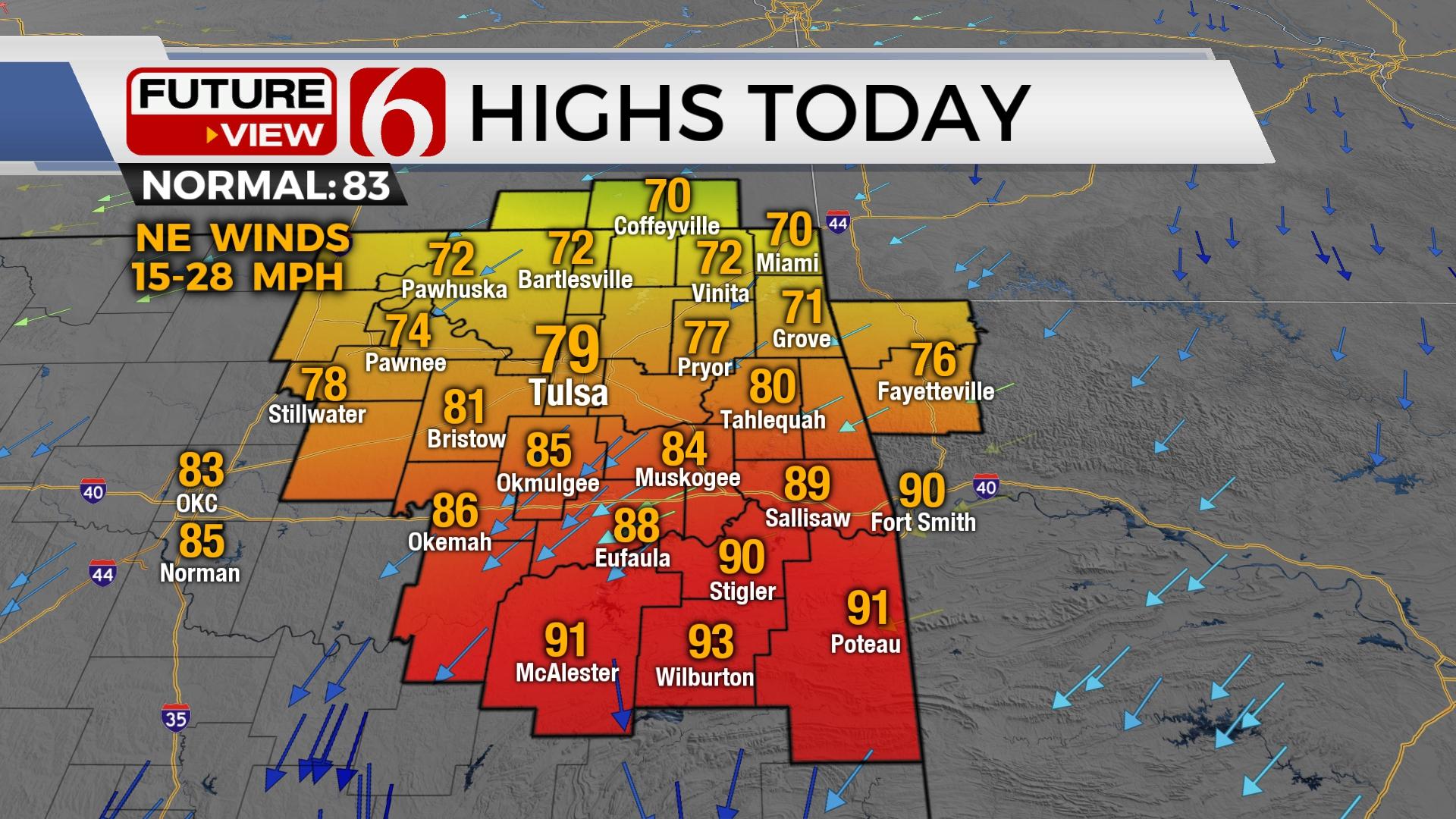 Cool temperatures move in on Thursday, but more warm weather could soon return. After reaching highs near 100 on Wednesday, a cold front moving across the area on Thursday morning brings gusty northeast winds and highs in the 70s across the northern third of the state. Locations slightly south of the metro will reach the mid-80s, and lower 90s will prevail south of I-40 for the afternoon. A small band of post-frontal showers will be possible later today, mostly along the Oklahoma-Kansas state line region as the tail end of the upper trough clears the area. It's unlikely that the metro experiences any showers, but I suppose a low chance should be offered. Since the potential for measurable rainfall is very low, I will not include a mention for the metro, but will keep low chances through midday along the northern tier counties into southern Kansas. Northeast winds will be gusting from 15 to near 30 mph with mostly cloudy skies north and partly to mostly sunny south. This will keep the cooler weather north and the warmer conditions south. There’s a good chance that spots north of the metro will stay around 70 to 73 for the day. I’ll keep the Tulsa metro at 79. The cold front is moving south this morning and will be near the Red River Valley before stalling Thursday afternoon across far north Texas. This feature will lift northeast as a warm front Friday bringing south winds and highs into the lower to mid-90s. Saturday will be another hot day with morning lows in the 70s followed by afternoon highs in the lower to mid-90s along with south to southwest winds from 15 to 25 mph. A second and stronger front arrives late Saturday evening into early Sunday with a slight chance for a shower or storm. Afternoon highs will drop into the mid-80s Sunday, but the dividend with the Sunday system appears for many days next week. Drier air will move across northeastern OK allowing morning lows in the 50s and afternoon highs near normal for most of the week. Some valley locations will drop into the upper 40s Tuesday morning as a weak surface ridge of high-pressure brushes northeastern OK allowing for clear sky and light winds. Tuesday through the end of the next week features the return of south winds and slowly increasing afternoon highs into the mid-80s. The Atlantic Hurricane Basin is quite active on Thursday morning. A developing system near the southeastern Caribbean Sea may become problematic for the U.S. by the middle to end of next week. Category four Fiona will remain well east of the U.S. but will be nearing Bermuda soon and into the Canadian Maritimes this weekend. At least two distinct disturbances are noted off the African Coast that may also fester into tropical systems. For more about the tropical possibilities, please listen to my daily weather podcast. The link is posted at the bottom of this page.