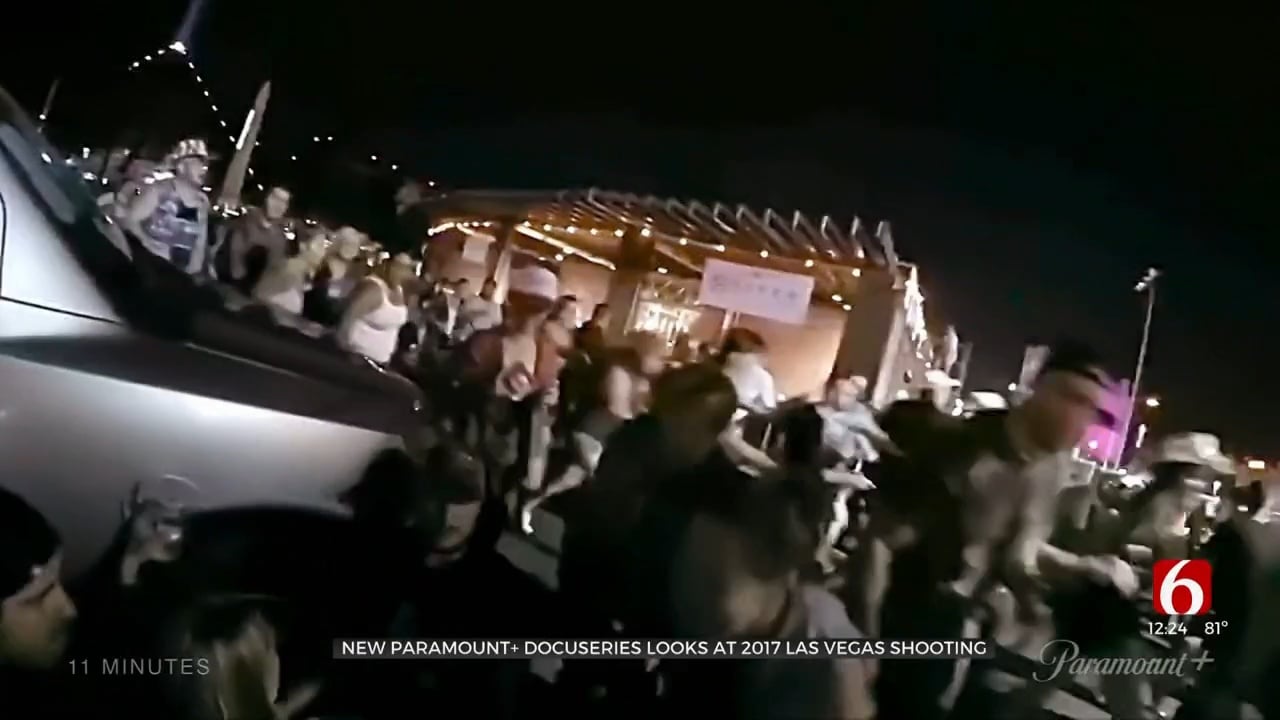 A pair of cowboy boots that Ashley Hoff never thought she would see again helped unlock a powerful story about the worst mass shooting in modern U.S. history.

The resulting film, “11 Minutes,” is an inside account of the 2017 massacre at a country music festival in Las Vegas and, more importantly, about how it reverberated in the lives of those who were there. More than three hours long, the four-part documentary debuts Tuesday on the Paramount+ streaming service.

“I’ve never felt more useful or more like the universe put me exactly where I was supposed to be,” said Hoff, an executive producer of “11 Minutes.”

It seems like a strange sentiment given that Hoff was at the show on Oct. 1, 2017, four rows from the stage as Jason Aldean sang “Any Ol’ Barstool.” Hoff heard popping sounds that she and her husband, Shaun, first dismissed as fireworks — not the work of a gunman firing from a nearby hotel window.

She turned to look at her husband and saw someone just behind him struck in the face by a bullet. They alternated ducking to the ground for cover and running away, depending on when they could hear the gunshots.

At one point, she kicked off her cowboy boots because it was too slippery to run in them, eventually escaping the killing field where 58 people died that night, and two more later of their injuries. More than 850 people were hurt before the gunfire stopped.

Nine months later, an FBI agent was at Hoff’s door with her boots — part of a little-known unit that returns property left behind by people caught in these incidents.

Hoff, already in the film business, thought that made an intriguing subject. She was encouraged to broaden her focus through her experience with fellow survivors and the involvement of director Jeff Zimbalist and veteran producers Susan Zirinsky and Terence Wrong.

Many survivors, like herself, were unhappy with media coverage of the massacre, believing there was too much focus on the gunman and that it was forgotten too soon.

“We all went back to our corners to suffer in silence,” she said.

The film takes you vividly inside the event with cellphone and police body-cam footage. The cooperation of Las Vegas police was key, bringing footage like the race to hospitals with survivors and the moment when a tactical unit burst into the casino hotel room where the gunman had barricaded himself.

The experiences of people like Jonathan Smith, a Black concertgoer who had felt unwelcome because of a white man’s remark wondering why he was there, and Natalie Grumet, who had just survived cancer, are weaved throughout the story. Both were seriously injured.

“Is it easy to watch? No, but it shouldn’t be easy to watch,” said SiriusXM host Storme Warren, who was onstage in Las Vegas that night. “I don’t know why you would tell the story if it were easy to watch.”

Warren at first hesitated when asked to participate in the film, dealing with his own PTSD and wary because of past media coverage. He and Aldean, who gave his first interview about Las Vegas to filmmakers, are important ties to the country community.

Hoff believes that her own experience that night, even though it is not included in the film, helped convince some of those involved to talk.

Searingly, the parents of Carrie Parsons, a young woman who didn’t survive her wounds, discuss dealing with every parent’s worst nightmare, and how their time to grieve with her body was cut short.

“They’re going to cremate my daughter in 10 minutes,” a tearful Ann-Marie Parsons recalled being told. “How do you deal with that?

After the shooting stopped, police talked of hearing the rings of cellphones as they walked among bodies still on the concert grounds, knowing there were desperate callers on the other end wanting to know if their loved ones were safe.

Beyond the concertgoers, it’s startling to see some of the first responders — often not the most emotive types — speak about how they’ve dealt with the emotional aftermath. “I was a very angry man. Very angry,” said Brian Rogers, paramedic operations chief, in the film.

Part four of “11 Minutes,” begins at dawn on Oct. 2, 2017, and focuses on some of the enduring bonds between survivors, and some of the rescuers.

It’s Hoff’s favorite part. “I do like to encourage people that there is goodness in the end, so hang in for that,” she said.

“There are extraordinary acts of courage and human beings helping human beings,” said Zirinsky, chief of the See It Now Studios production company. “They’re just regular people. In the darkest hours, people found each other.”

Zirinsky, the former CBS News president, produced “9/11,” perhaps the most memorable doc made in the wake of that disaster, and considers “11 Minutes” the most powerful film she’s worked on since.

While the film talks about the gunman, whose motive remains a mystery since he killed himself before police reached him, it pointedly does not mention his name. Almost militantly so: A series of audio news reports included are cut off just before the name is spoken.

It was found that the gunman had searched the internet for “how to be a social media star” in the days before the shooting. Even in death, Hoff doesn’t want to give him that wish.

The film ends with a slow crawl showing the names of those killed five years ago in Las Vegas, as well as the victims of every mass shooting since that time in the U.S. where at least four people were killed.

“I don’t call it a political statement,” Zirinsky said. “I call it a statement of reality.”

Both Hoff and her husband escaped the concert without any gunshot wounds, although Hoff broke her arm when she slipped and fell trying to run in her cowboy boots. She didn’t notice her injury until they stopped running.

She’s fine if people take the message from her film that enough’s enough.

“We need to stop turning away, and we need to understand what going through this was like,” she said. “It changes a person forever.”