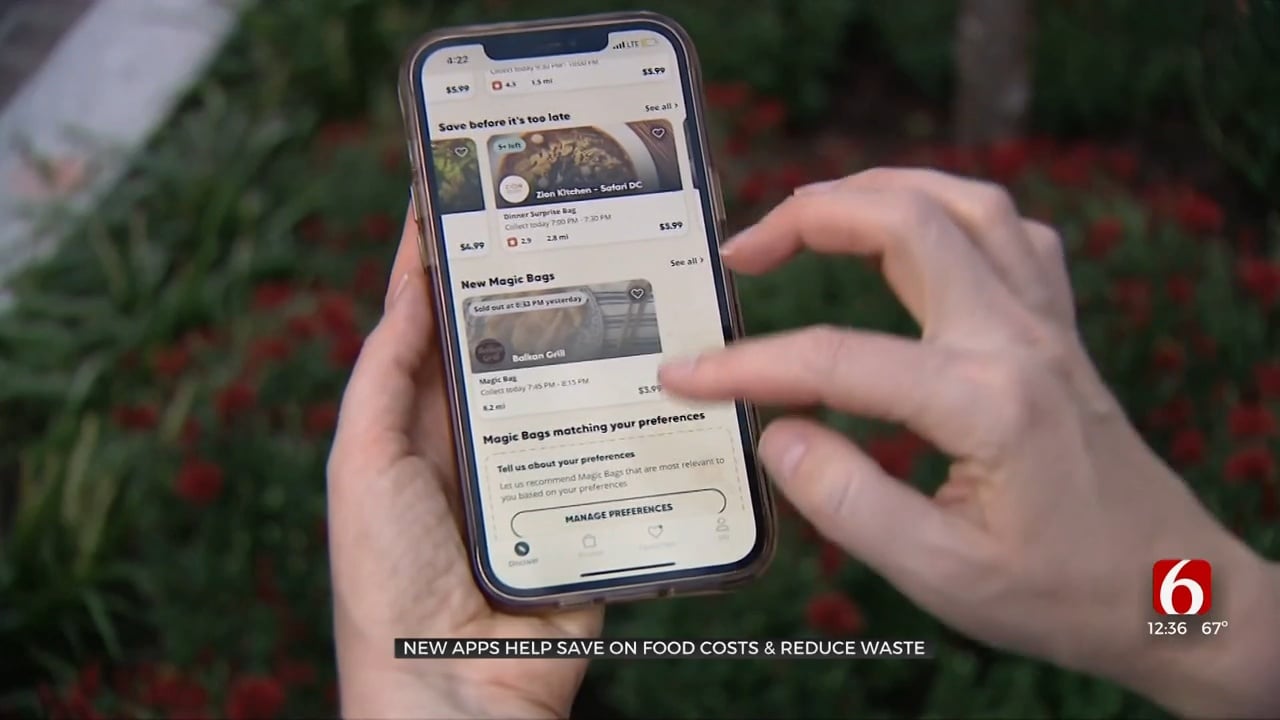 Two companies are using technology to try to help people save money and help stores and local restaurants cut down on food waste.

The app "Too Good To Go" offers discounted food from restaurants that may otherwise be thrown away. Customers can buy a surprise bag from local store and restaurants that costs between $4 and $6. The food can be anything from bagels and pastries to salad and pizza. Josh Bayard uses the app and recently purchased a bag from Bullfrog Bagels in Washington, DC. He spent $4 and received 8 bagels, saving about $10. Bayard says he appreciates getting a deal, but his main motivation is to help the environment. "It makes me more apt to want to frequent these businesses because I know that they're serious because you can physically see that they're trying to save waste," Bayard says.

The owner of Bullfrog Bagels Jeremiah Cohen calls it a win-win situation. "There's just less waste. We make a little extra money, and the customer gets a very deeply discounted bagel," Cohen says.

"Flashfood" offers discounted food from about 1,400 supermarkets nationwide. Stores like Stop & Shop pull items from their shelves that are nearing the expiration date and then sell them for around half price on the app. Customers pick up the items they purchased from a refrigerator and shelves near the front of the store.

An October 13th report from the Bureau of Labor Statistics found prices at the grocery store went up 13% over the past year and eating out now costs 8.5% more than it did last year. "Flashfood" says interest is growing as groceries become more expensive. "People need to feed their families affordably. And especially right now as food prices have gone as high as they've ever been and with inflation," says "Flashfood" Founder CEO Josh Domingues.

"Flashfood" and "Too Good To Go" take a percentage of every sale, but the companies say they are committed to fighting food waste. "Flashfood" says their app has diverted 50 million pounds of food from going into landfills. The "Too Good To Go" app is offered around the globe and claims it saves 300,000 meals a day from going in the trash. "In the world we actually have more than 65 million registered users on the app and more than three million in the U.S. alone," says "Too Good To Go" Co-Founder Lucie Basch.

The apps are growing in popularity as food waste becomes a bigger issue. The USDA says restaurants and grocery stores throw out billions of pounds of food every year. "If food waste were a country, it would be the third largest emitter of greenhouse gas emissions after the United States and China," says Dani Nierenberg, president of Food Tank, a non-profit that works to feed the hungry and cut down on food waste. "I really feel that these food apps are part of the solution. I've always said an app can't save the world, but these food apps that will rescue food that would otherwise end up in landfills and give it to people who want it and it's tasty and delicious. It's perfectly good if we can save that food from going into landfills and give it to people who want it," Nierenberg says.

"Too Good to Go" is in 13 major U.S. cities and "Flashfood" is in about half of U.S. states. Both are expanding to transform more food waste into an affordable feast.