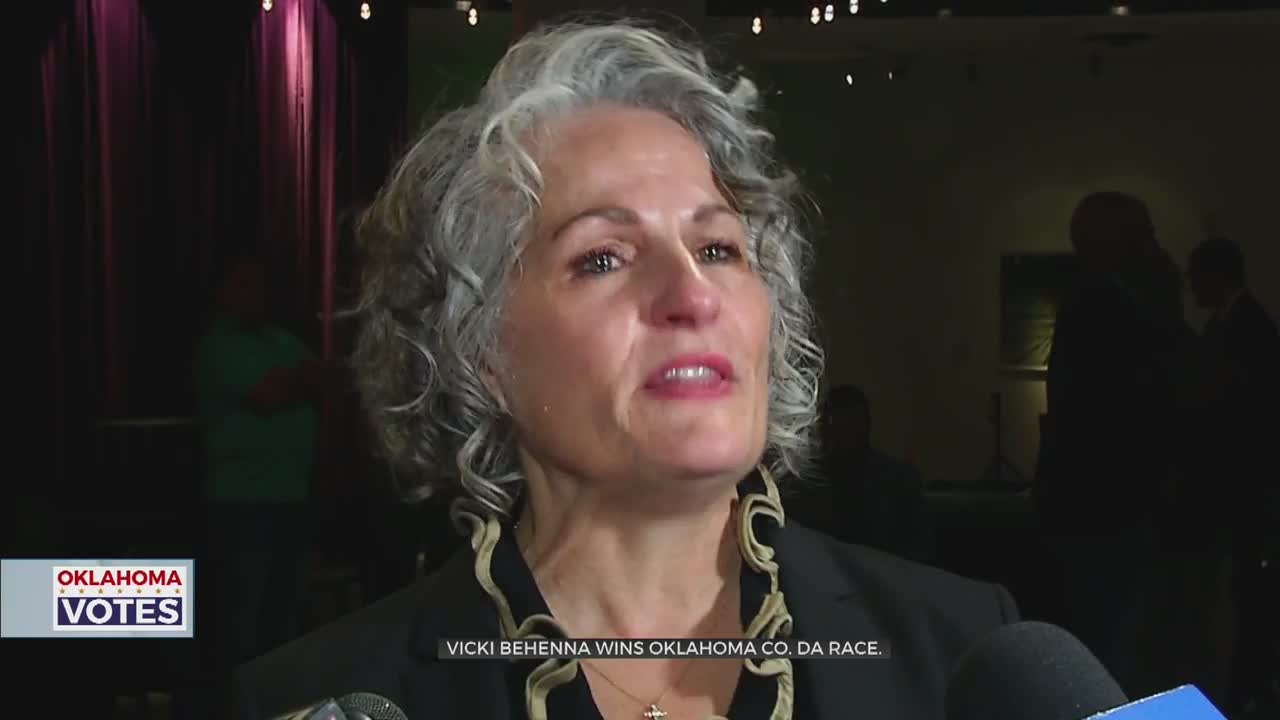 There will be a new name written on the Oklahoma County’s District Attorney office wall for the first time in more than 15 years.

There was a room full of supporters celebrating new DA-elect Vicki Behenna. Behenna won the Oklahoma County District Attorney race with 54 percent of the vote.

Behenna said the win makes her emotional because she did this not just for her community, but her family.

She said her two granddaughters will now see her make history as the first female district attorney for Oklahoma County.

“It was really my granddaughters that gave me the strength to do it because I want them to believe that you can do anything,” Behenna said. “You want to do (it). It doesn't matter who you are. If you're male, female, black, white, it doesn’t matter. If you have the desire and the integrity to do something, you should do it.”

Even though she won’t be in the DA’s office until January, Behenna said the work starts now. Current District Attorney David Prater said he met with Behenna following the election to begin the process of preparing her for office.

“Oklahoma County is my home and I have had the privilege of serving my fellow citizens as their District Attorney for sixteen years,” Prater said in a statement. “The future of Oklahoma County is very important to me and my family. I have a great amount of confidence that DA-Elect Vicki Behenna will protect and serve the people of Oklahoma County in a manner that will be appreciated and respected. She is a woman of character who has been dedicated to public service all her life in a myriad of roles. I know that she will lean on her life experiences to make the difficult decisions that are incumbent to the position of District Attorney and move this office forward in the best interests of all citizens.

“Ms. Behenna and I are meeting today. We will begin the process of her assuming the lead in this very important office. I will do everything I can to assist her in preparing for January 2, 2023. As two professionals who care deeply about our community and its citizens, we will demonstrate how power can be transferred in a civil and productive manner and in the best interests of those we serve. I anticipate great things from Ms. Behenna, and I am excited for the future of the Oklahoma County District Attorney’s Office.”

“I have my own guidelines that I will be setting in the office,” Behenna said. “One of the things is professionalism and communication and treating people with respect, letting victims know what's going on with their cases ahead of time.”

Through her campaign, Behenna was confident her experience would lead her to victory.

When News 9 asked her what did she learn about herself during this campaign, she said, "I’m tougher than I think I am."

“Last November, I answered what I perceived to be a calling from the Lord to reform the District Attorney’s office by running for DA,” Calvey said in a statement. “I have fulfilled that calling by my candidacy and working hard at that candidacy, win or lose. St. Teresa of Calcutta, also known as Mother Teresa, said, “God has not called us to be successful. He has called us to be faithful.” I have been faithful to this calling.”

“We ran a very good campaign. Thank you to my family, our campaign team, our volunteers, donors, and those who endorsed me. We worked hard. But there were factors beyond our control that made us fall short, mainly dark money attack ads against me. Far-left dark money has won District Attorney races all over the country and now they have played in Oklahoma County. Nonetheless, I have no regrets.

“I have fought the good fight. I have run the race. I have been faithful to that calling.” ~ 2 Tim 4:7.” Now, that calling is finished. I can say, Now, Lord, let your servant go in peace. I am retired from politics as of now. We are now free to pursue our private business, and raise our children, without the worries and distractions of public life. May God bless you, and God bless America!”