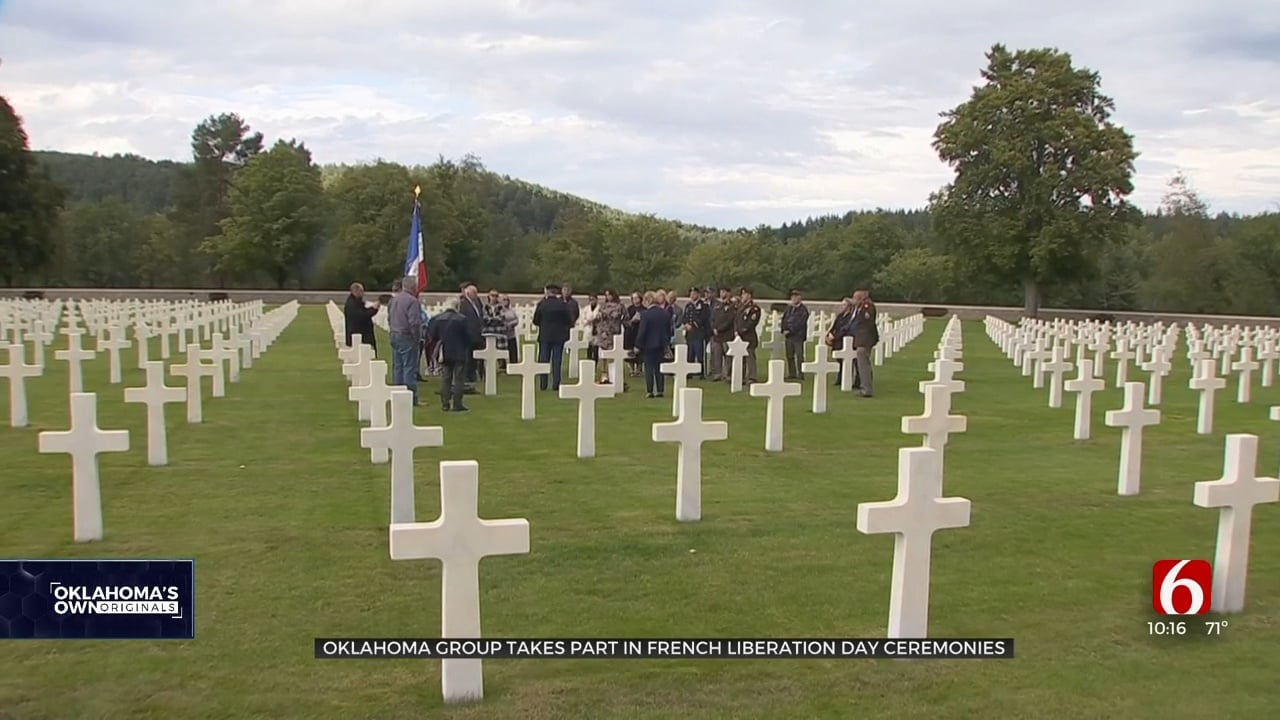 A group from Oklahoma’s 45th Infantry recently got the chance to take part in Liberation Day ceremonies in France.

The Thunderbirds played a key role in liberating much of Eastern France during World War II.

Epinal is in Northeastern France, not far from Germany. The town of 35,000 people is known for art and history, like the 11th century Basillica of Saint Maurice. Epinal is a place where midieval mixes with modern.

Just a few miles from the shops and restaurants in the city center, the revelry is replaced with reverence, for a Liberation Day ceremony at the American Cemetery in Epinal.

With members of the French military at attention, and a large crowd, dignitaries laid wreaths to honor the U.S. soldiers buried there, and played America's national anthem.

A group from Oklahoma's 45th Infantry is among those honoring the Americans who never made it home.

Carter has been to the American Cemetery in Epinal before, but said each visit is moving.

Carter told a European media outlet, “We serve so we don't have to put any more of these white crosses in the soil."

The 5,252 white marble crosses at the American Cemetery in Epinal each prove freedom isn't free.

"This is just a fraction of those that sacrificed and gave everything," Chief Warrant Officer 3 Christopher Nader, 45th Infantry said.

Jocelynd Papelard-Brescia runs a group in France that adopts the graves of American soldiers and helped to coordinate the visit for members of the 45th Infantry.

"The young have to realize that freedom has a price, and these men over there, they paid with their blood," said Papelard-Brecia.

Leaders in France invited the group from Oklahoma to take part in Liberation Day ceremonies; not just at the American cemetery, but also several other French towns and villages. Each has its own liberation day and its own events to say thank you.

"It's completely the biggest honor I could ever ask for," said Specialist David Jeffrey.

One event honored a lone American soldier from the 45th, buried along a rural road in Eastern France. Locals have never missed a year honoring him.

The small village of Hadol, France unveiled a sign honoring members of the 45th.

On the trip, the Oklahomans were giving away 45th Infantry flags, pins and coins. Nearly 80 years ago, many gave their lives.

"These young Thunderbirds, like the other young soldiers there, had a life, had loved ones, they gave up careers, they gave up dreams," said Papelard-Brescia.

The Thunderbirds played a key role in liberating Southern and Eastern France.

Before coming here to France, the 45th Infantry fought its way through Sicily, then Italy at places like Anzio and Salerno, and experienced heavy fighting. They then led a huge invasionary force into Southern France.

The 45th inflicted heavy casualties on the Nazis. The fighting became more fierce the closer the Americans got to Germany.

Although Nazis controlled the entire region, the 45th crossed the Moselle River into Epinal, and soldiers fought building to building for days to clear the town.

Denise Neil is the director of the 45th Infantry Museum in Oklahoma.

"It's a story that not many people know. Most people know the landings at Normandy, or they know the Battle of the Bulge, and it's such an important story to tell,” said Denise Neil, Director of the 45th Infantry Museum in Oklahoma.

During that time in France, people were suffering terribly under the rule of Nazi Germany. So Liberation Day was a joyous event and celebrated. All of these years later, it's still celebrated.

It's why the French are so steadfast in their appreciation for those who fought, bled, and died.

"To see that they still remember after all this time, it's remarkable," said Carter.

Gerald Harp from Shawnee was a high school football star who married his high school sweetheart, Peggy. He was killed at 21-years-old on his first day of combat.

"My mom was never the same," said Harps’ daughter, Diana Fleming. She was only 18-months-old when her dad was killed in action.

Five thousand miles from Epinal, at her home in Asher, Oklahoma, Fleming shared what family members have told her about her dad. She read from a more than 70-year-old letter written in pencil from a fellow soldier. The letter described her dad and how he was killed by a mine while trying to save injured soldiers.

“Everyone in our outfit liked Gerald as a staunch friend, sorry. And a gallant buddy, and we join you in your grief."

Seventy-eight years after his death, Fleming said because she never really knew her dad, she doesn't miss him, but she missed out on him.

"But I would have given anything to have known him,” said Fleming.

If she could talk to her dad, she'd tell him about his grandkids, that she's had a good life, and that she's proud of him. "Someday I'm going to meet him."

The group from Oklahoma laid a wreath at Gerald Harps grave in France. "Gerald is not forgotten," said Papelard-Brecia.

And neither are the others, who fought for villages they'd never heard of, and died so freedom loving people could live in peace.

As he looks out at the American Cemetery, Chief Warrant Officer 3 Christopher Nader said, “War should not be taken lightly, this is the cost."

Colonel Brad Carter agreed. “We have got to continue telling this story."