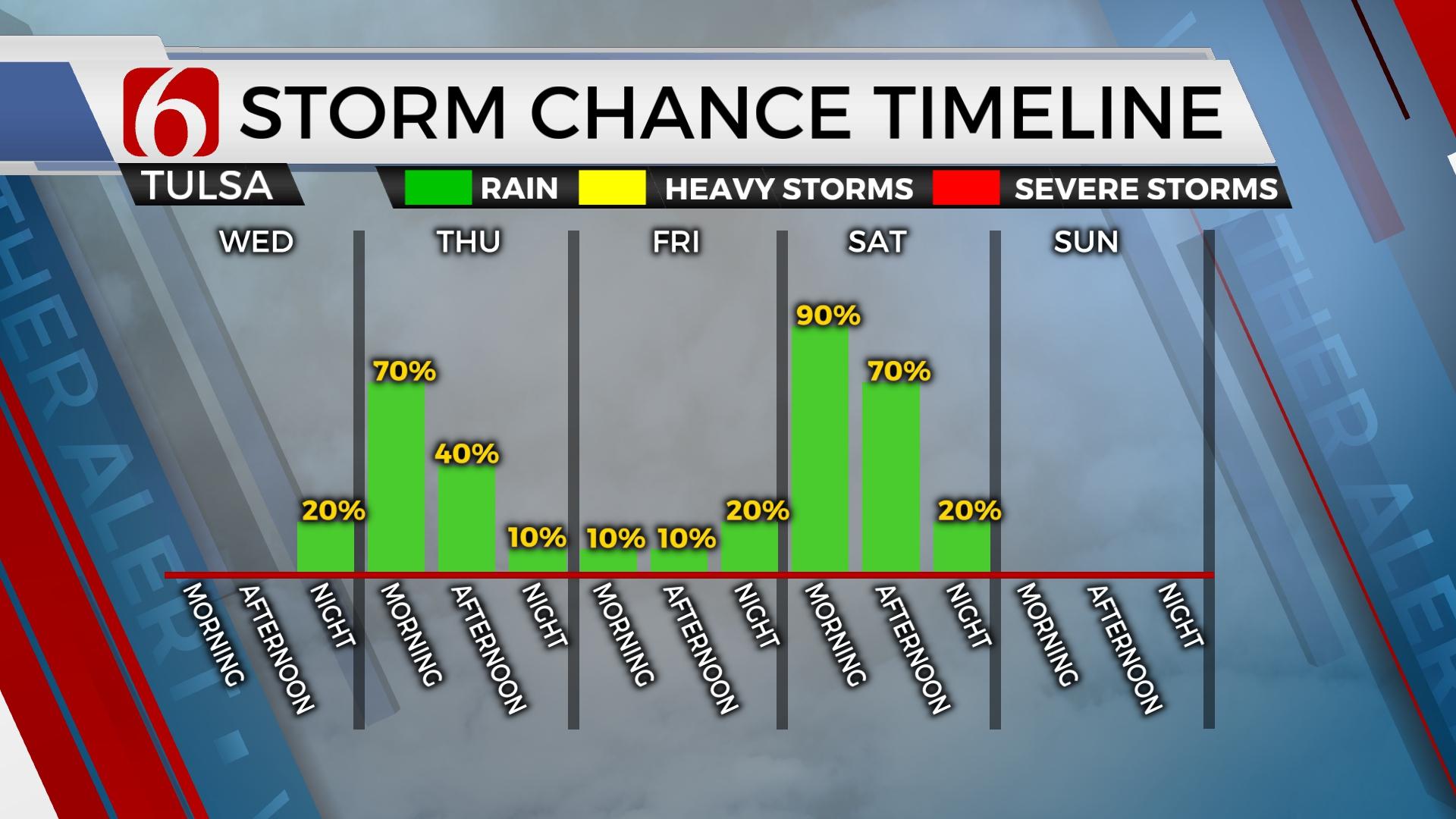 TULSA, Okla. - Cool and breezy weather is expected on Wednesday before some shower chances return on Thanksgiving. The evolution of the main upper-level through this period seems to finally converge on a consistent basis in the data. The strong low will drop across the Rockies on Wednesday, dive southward into Eastern New Mexico on Thursday, and slowly move east across central Texas Friday before ejecting out of northeastern Oklahoma Saturday afternoon. Cold air aloft, directly under the column supports accumulating snow across the high plains of Texas and possibly a small area of far western Oklahoma. The thermal profiles support all liquid precipitation for the eastern half of Oklahoma with this system. We'll continue to watch for any signals of colder air aloft which could bring some snow, but at this point seems unlikely. The timing of the system should offer a few periods of higher local probabilities for rain. The first arrives later Wednesday night into Thursday morning, and the second late Friday evening into Saturday morning. These book-end times will feature the highest probabilities. There will remain some rain or shower chances in the middle of this period but will be lower, with some locations remaining dry. While dynamic energy is strong with this system, surface instability is lacking with higher values positioned well south of the region. Thus, no severe storm formation is expected. There will remain enough elevated instability for a few thunderstorms, especially later tonight and early Thursday morning across southeastern Oklahoma. There will be a period of locally heavy rainfall potential with this system. Currently, that would be late Friday evening into early Saturday as the main upper trough moves over northeastern OK. Hopefully, this band of rain occurs after Friday night football games, but it will be a close call. By late Friday night rain is likely into early Saturday morning as a band of moderate rainfall pivots from the south to north. By midday to afternoon, this band will be leaving but a few wrap-around showers will be possible Saturday afternoon. Sunday will be dry with a gusty north wind. Temperatures have continued to cool down in the last few days in the data and we've continued to lower values a few degrees. Thanksgiving Day features highs in the lower to mid-50s. Friday the range of afternoon highs will be small with upper 40s to lower 50s likely. Depending upon exact timing, Saturday may also stay in the upper 40s and lower 50s for the afternoon. Early next week the pattern briefly allows a return to much warmer weather before our next strong upper trough moves into the middle of the country bringing a cold front across the state either Tuesday night or Wednesday. Temps Monday reach highs in the mid-60s with increasing southwest winds. Tuesday afternoon readings into the lower 70s will be reachable with strong south winds at 20 to 30 mph before the cold front moves across the state by afternoon and evening. Storm chances will occur along and ahead of this boundary by afternoon and evening, including the precursory mention for a few strong to near severe storms. A strong surface low will eject from the Rockies into the upper Midwest during this period with stronger dynamics aloft also slightly northward. Regardless, a few strong to severe storms would be possible in this pattern. Very cold air will sink across the northern half of the nation next week. We'll see a return to some chilly conditions by the latter part of the week.