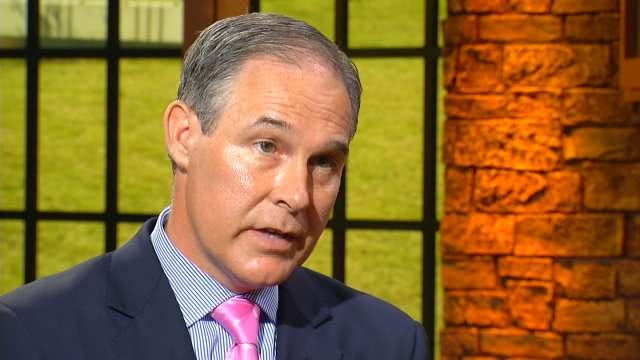 Oklahoma Attorney General Scott Pruitt's Office has been sued by the Humane Society of the United States after the organization's refusal to release documents the Oklahoma official has requested.

The AG's office has called into question HSUS fundraising efforts.

According to a news release, Pruitt on Wednesday urged the HSUS to disclose documents that the group will not give to the Attorney General's Office pursuant to a civil investigative demand (CID). After several time extensions, HSUS failed to comply with the requests in a timely manner and instead has chosen to respond with a lawsuit, Pruitt says.

The AG said he is reviewing the solicitation practices of the HSUS in order to address concerns that the group's solicitations in Oklahoma may be misleading.

"The concern is that the HSUS projects heart-wrenching imagery of puppies and kittens in solicitations in order to extract donations from unsuspecting Oklahomans who believe their donations are going to help local animal shelters, but instead, their hard-earned money may go to high-powered lobbying and special interest campaigns that are determined to shape state and federal legislation that would harm farmers, ranchers and other Oklahomans," a statement from Pruitt says.

Pruitt says his office has the statutory authority to monitor and regulate charities operating in Oklahoma and has requested records from the HSUS through a CID.

"After multiple attempts by the Attorney General's office to acquire a good faith response, including extra time to comply with the CID, the group has responded with a lawsuit," Pruitt said.

HSUS released a statement to media on Wednesday, claiming Pruitt's requests amount to a “fishing expedition,” that he doesn't have the authority to request the documents and that the documents his office seeks include confidential and proprietary information.

“An Oklahoma state court will decide whether to limit Attorney General Scott Pruitt in his nearly yearlong campaign of political harassment and public vilification of The Humane Society of the United States," a HSUS statement says. "The HSUS filed a lawsuit today in Oklahoma County, alleging Pruitt has improperly sought privileged documents from the national charity. The complaint asks the court for a declaration and an injunction to stop Pruitt's actions.

Beginning in early 2014, Attorney General Pruitt called into question the reputation and fundraising practices of The HSUS through official government channels, in interviews, and on social media. Yet based on communications with The HSUS and its attorneys, Pruitt has not received a single complaint about deceptive fundraising practices from any HSUS supporter.

Pruitt made many of his incendiary, untrue remarks to members of the Oklahoma Farm Bureau, a private organization representing agricultural interests which has long been a political adversary of The HSUS. At Oklahoma Farm Bureau gatherings throughout 2014, Pruitt falsely stated that The HSUS raised money under the guise of pet assistance in the wake of the devastating tornadoes that struck Moore, Okla., taking 24 human lives. The HSUS provided information to Pruitt demonstrating that the organization conducted no fundraising for the response to the tornadoes' aftermath, and that its assistance was not requested by local authorities for tornado response.”

Julie Bays, Chief of the Public Protection Unit, said she is perplexed why the HSUS chose to file a lawsuit rather than disclose documents that could prove transparency in the organization's charitable efforts.

“It's unclear to me why the HSUS would file a lawsuit rather than help us answer concerns that their solicitations in Oklahoma may be misleading,” Bays said. “Instead of respecting the donations of generous Oklahomans by providing clarity that such donations were used for the purposes represented in solicitations, the HSUS has decided to sue the Attorney General's Office and wage a duplicitous war of misinformation against the people of Oklahoma. Our office will not tolerate any charity using misleading or untruthful solicitations to take advantage of the generosity of Oklahomans and will not blink in the face of this unwarranted lawsuit.”