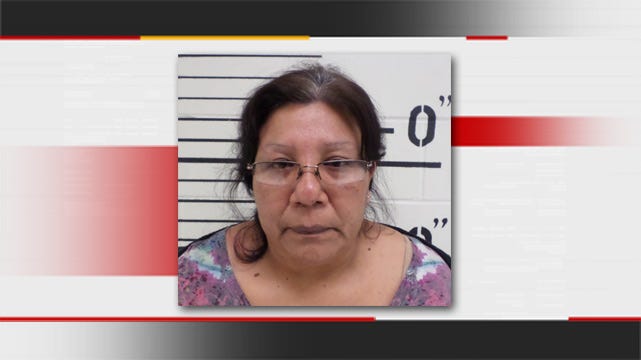 A foster mother is in jail for murder after a 2-year-old girl was found dead in a home south of Tahlequah.

Cherokee County Sheriff's Office and Cherokee Nation EMS were dispatched to a home on Sunday morning at 11 a.m. for an unresponsive child.

A toddler was pronounced dead on arrival.

The child's body was transported to the state medical examiner's office. The ME reports the cause of death was internal injuries and considers the manner of death to be homicide.

Cherokee County Undersheriff Jason Chennault said the little girl had injuries to her liver, which are consistent with blunt force trauma.

Deputies went to the home and removed three teens -- one boy and two girls, who are the biological children of the suspect -- and a 3-year-old foster girl.

Chennault said the little girl who died was Pacheco's great niece and the 3-year-old foster child is the victim's sister.

"What that means is instead of putting the child in the foster care system, they find a suitable family member for the child to live with," Chennault said.

On Tuesday afternoon, deputies arrested Delila Pacheco for murder and booked her in to the Cherokee County jail.

Pacheco is being held without bond.

Child Welfare and the OSBI are assisting with the investigation.

The undersheriff said Pacheco has previously been arrested for domestic violence, but never anything related to harming children.