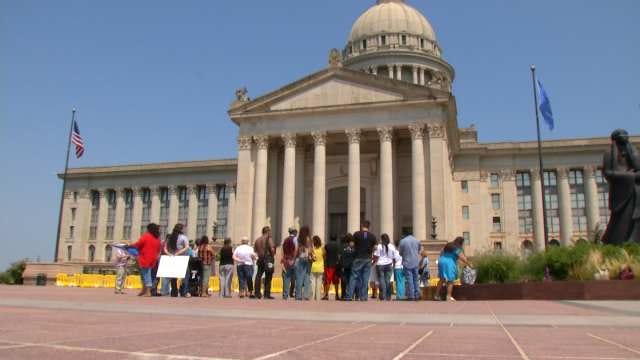 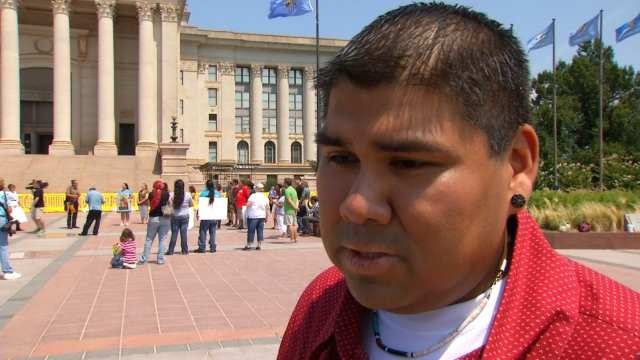 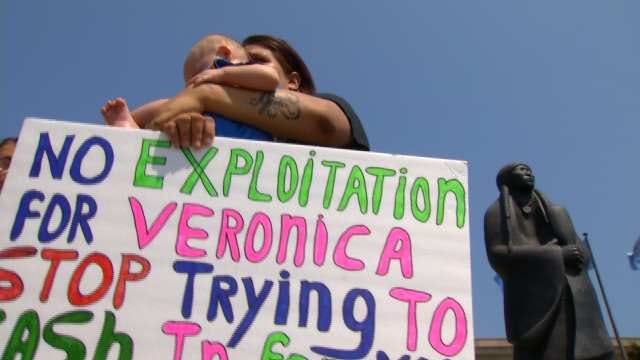 The saga over the custody of 3-year-old Veronica Brown continues into another week. Monday, supporters of her biological father, Dusten Brown, rallied at the state capital.

More than two dozen Native Americans gathered in the shadow of Oklahoma's state capitol. They represented a variety of tribes, including Kiowa, Seminole, Muscogee (Creek), and Cherokee.

"What you see going across tribal barriers is caring for our children to make sure they're in the proper environments, that they will be able to succeed in life as best as possible," said Chebon Cernell, Seminole tribe member.

They're worried for Veronica Brown and hoping to "liberate" her, so she may grow up with a Cherokee family.

"And what may look like acts of resistance to outsiders is a profound act of love, because we know that our children represent who we are," said Cherokee tribe member Lizz Toombs.

Their goal is to also draw attention to what they say is the big picture stemming from Veronica's case: Native Americans making decisions for themselves and not allowing the U.S. government to dictate where their children should live.

"I don't foresee anything happening to me to where I won't be able to take care of my kids, but, in such cases, I would want my tribe to be able to say what is best for my children, than the government," said Maria Todd.

At the heart of the matter is the Indian Child Welfare Act (ICWA). It's intent is to keep Native children with their own culture.

The Supreme Court has ruled ICWA doesn't apply in the Brown case, and rally organizers say that ruling brings back frightening memories for Native Americans.

There were no signs of supporters for the Capobiancos at the capitol.

Dusten Brown's fate is unclear. He still faces extradition to South Carolina for custodial interference after failing to show up and a court ordered hearing.

His supporters say they will continue to rally for him and his daughter.

Governor Mary Fallin has said, as long as the Capobiancos and the Browns are working together for what's best for Veronica, she will not work to review the extradition request for Dusten Brown.