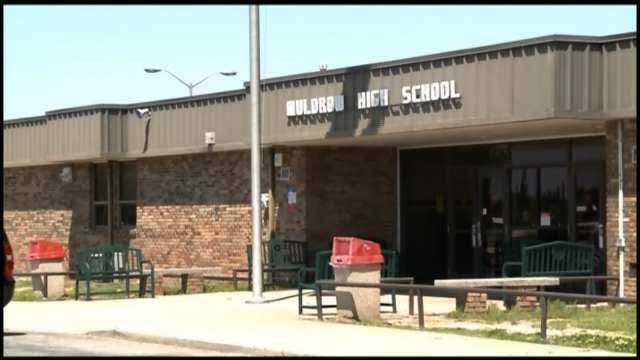 Muldrow Public Schools is at the forefront of a battle over the separation of church and state.

The high school has a plaque in every classroom that lists the Ten Commandments.

Now, the district has decided to permanently take down the signs. Dozens of upset parents were at the school board meeting Monday evening.

The parents say, after 20 years of having the Ten Commandments signs up, it doesn't make sense to take them down now.

But the district's lawyer says they can't afford a lawsuit.

It's a tradition the school says dates back decades.

A national nonprofit called Freedom From Religion Foundation sent the superintendent a letter asking him to remove all signs or face a lawsuit.

To avoid legal drama, the school took down all of the signs late last week.

"When it's clearly decided, there's no point in continuing to fight a losing battle and in this situation, these types of cases, school districts get sued and lose. "hey end up having to pay money, not only to their lawyer, but to the other side's lawyer, as well," said Muldrow Schools attorney Jerry Richardson.

Some argue the Ten Commandments are part of being an American. There's even a billboard nearby that lists each commandment.

"They hate the negative attention I'm sure, but I think they're giving in. Leave it up. Leave it alone," said Muldrow resident Tony Ubanks.

But some students can understand why the school is taking this decision.

"It might be better for them to take them down, just so they don't lose a bunch of money that they need to buy books and everything we need," said senior Darian Preston.

The superintendent did not speak at the meeting. He referred all questions to the school's lawyer.