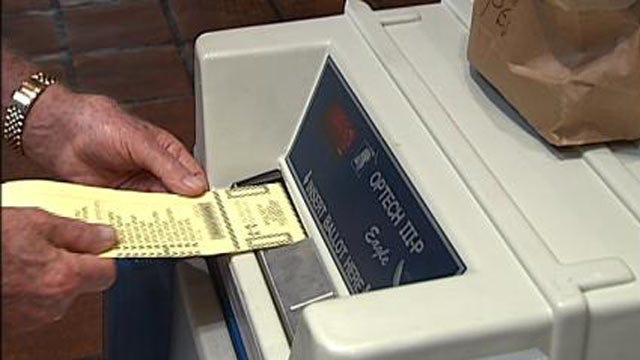 TULSA, Oklahoma -- Registered Tulsa voters who plan to vote in Tuesday's special election will be required to bring proof of identity under a new law that went into effect last month.

Tuesday's ONG Franchise Election is open to all city of Tulsa voters.

This election is the is the first election in Tulsa since nearly 75 percent of Oklahoma voters approved the voter ID law in November.

In an unrelated note, the Tulsa County Election Board says two precinct voting locations are changing for this election only due to the lack of air conditioning at the regular polling place.

The election board says precincts 103 and 159 voters will vote at precinct 100 at the Hicks Community Center at 3443 South Mingo Road.

The regular polling places for 103 and 159 at the Treasure Parks Rockwood and Rockwood Village will be closed because of no air conditioning.

Anyone with questions regarding the polling place change should call the Tulsa County Election Board at 918-596-5762.

Polls are open Tuesday in the city of Tulsa until 7 p.m.