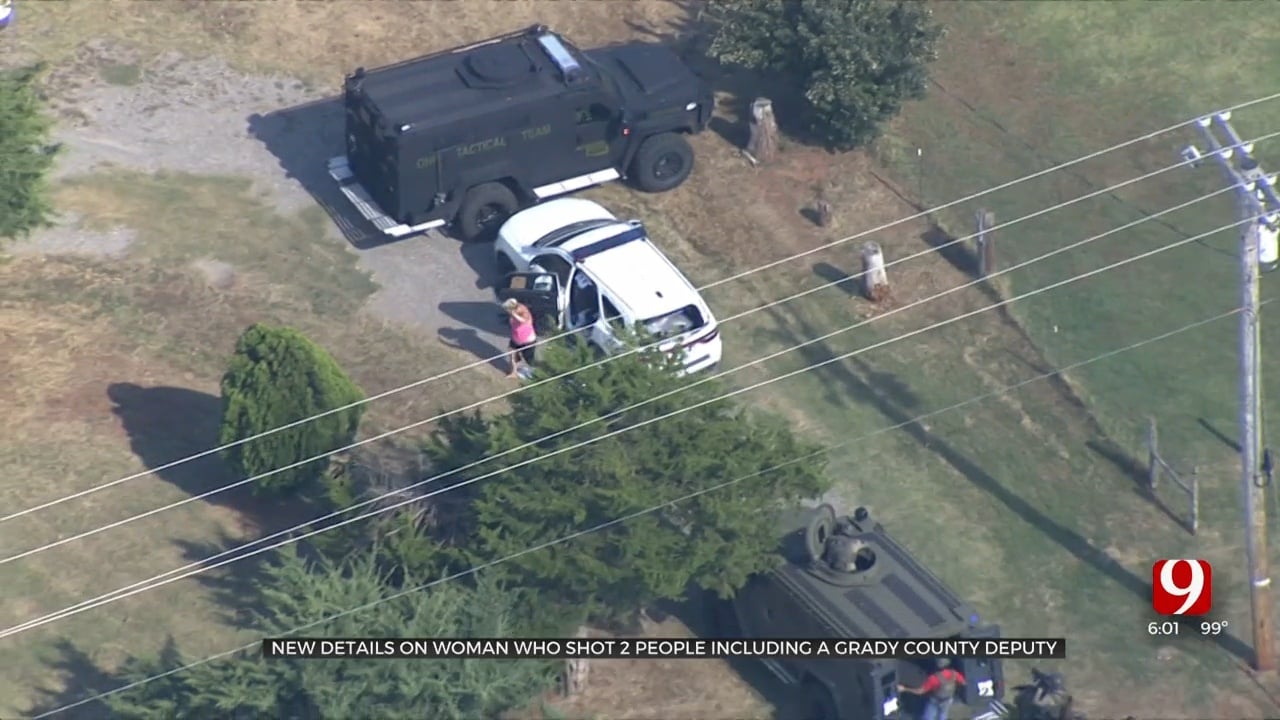 The incident left a Grady Co. Deputy and civilian with gunshot wounds.

Grady County Undersheriff Gary Boggess said the incident began the night before. Rachel Clay and the civilian shot had met the night before, but it wasn’t until Friday morning that she began acting irrationally.

"Apparently she was out in the front yard barking like a dog and crawling around on the ground," said Undersheriff Boggess.

Grady Co. Deputies arrived after the man’s son called police. Deputies handcuffed Clay and put her in the back of a patrol car. That’s when she made her escape.

"She struggled for fifteen or so minutes and then she was able to slip. By looking at the cuffs through our car camera, they look like they were applied like they were supposed to be. They were double locked, but she worked at it. She worked at it a long time," said Undersheriff Boggess.

Boggess said Clay reached through an opened sliding partition that deputies left open so she could get air conditioning in the backseat. She was able to grab the deputy’s AR-15 and began to fire.

"It looked like it hit a tree, it looked like it did a ricochet off the tree and then glanced off and hit my deputy in the back of the neck and then also hit the civilian in the chest," Undersheriff Boggess said.

"We had to break the windows out so one, we could in there and see what she was doing. She put paper all over the windows and then we actually have to break the window out for them to be able to crawl out the back window," said Undersheriff Boggess. "So, she could have access to get out. She was warned if she didn't get out, we would put chemical agents in there with her. At that time, she would come out no matter what, but we have to give her an exit point."

Both people who were shot will recover. The deputy was released on Friday and the civilian on Saturday.

Clay was arraigned in court on Monday. Police still don’t know if mental illness is to blame.

"We think there may have been some illegal narcotics used but we're not 100% sure. We're still early in this investigation," said Undersheriff Boggess.

Undersheriff Boggess said that both deputies who responded to the initial call were acting in accordance with their training. Neither will face disciplinary actions.

Clay is charged with three counts of shooting with intent to kill, but those charges could be amended.