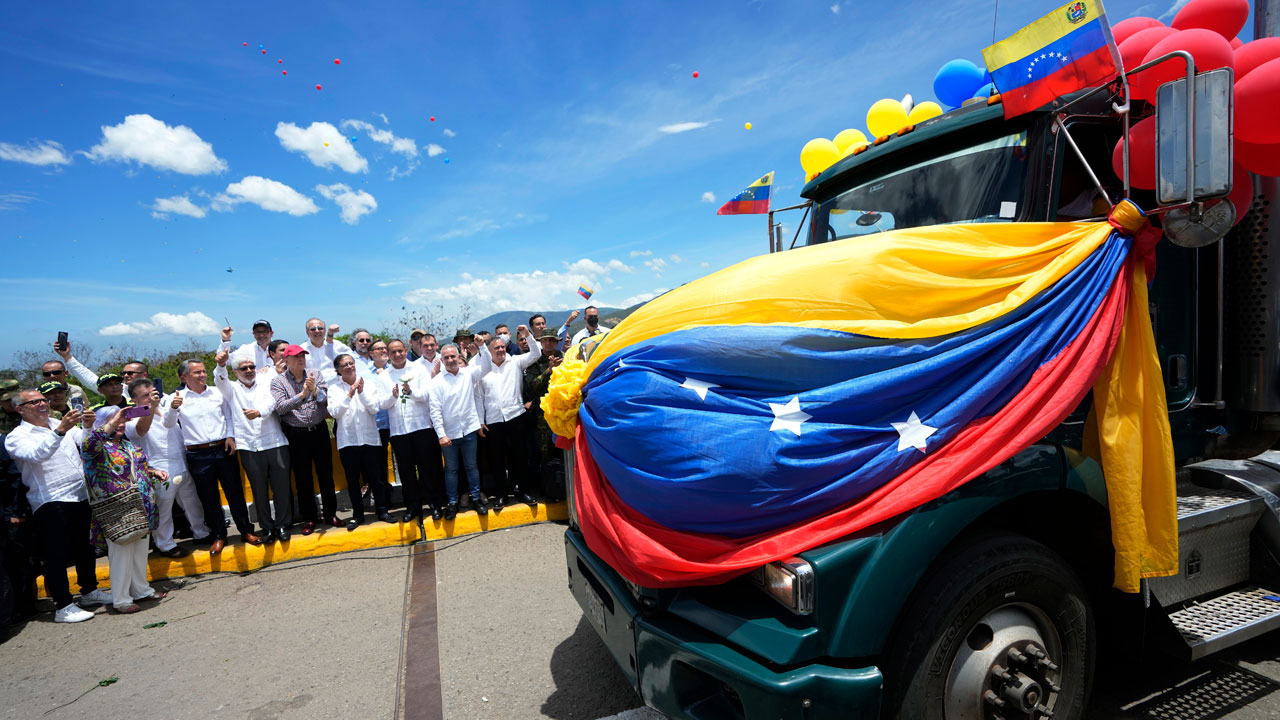 Colombia’s new leftist President Gustavo Petro, who took office in August and quickly moved to reestablish ties with Venezuela’s government, was on hand as the trucks rolled across the Simon Bolivar International Bridge between Cucuta, Colombia, and San Antonio, Venezuela. It was once one of the busiest crossings between the two South American nations.

Residents of border areas and business owners in both countries expect the resumption of cargo traffic to generate jobs and reduce the thriving illegal commerce.

“Hopefully, we can reactivate the 1,200 direct jobs that were lost,” said Sandra Guzmán Lizarazo, president of the Colombian Federation of Logistics Agents in International Trade, which had to close all but one of its 15 customs warehouses in the Colombian border city of Cúcuta when commercial traffic was blocked.

Venezuelan President Nicolas Maduro in 2015 ordered border crossings closed during what he described as a crackdown on smuggling. Foot traffic eventually resumed, and some very limited cargo continued to move through the northernmost bridge.

Relations were already strained between Maduro’s socialist government and U.S.-allied Colombia. They were strained further after Maduro’s 2018 reelection, which Colombia, the U.S. and many other nations considered illegitimate. Diplomatic relations were severed the following year.

Trade between the two countries reached $2.4 billion in 2014 but fell to about $406 million last year — most of it Venezuelan imports from Colombia — according to the Chamber of Venezuelan-Colombian Economic Integration. The group, based in Venezuela, estimates this year’s activity could exceed $1 billion if the crossings reopen to vehicular traffic.

The Venezuelan government has estimated that the commercial exchange within a year of a fully reopened border could exceed $4 billion.

The first truck to cross the bridge entered Colombia carrying aluminum rolls from Venezuela. The next truck moved in the opposite direction, hauling medicines. Each was decorated with flags and honked as it entered the neighboring country.

Petro said the trucks’ movement is a “symbol of unity” and indicated that the border should never have been closed.

“Globalization, above all else, is trade and unity between neighbors,” he told reporters after the event. “Anyone who measures the flows of international trade, cultural flows, population flows, will always find that the greatest amount is between neighbors and that is how it was before sectarian madness took over hearts and brains. So, it was between Colombia and Venezuela.”

Venezuela Transportation Minister Ramón Velásquez repeatedly shook Petro’s hand as they stood with a group of officials, including the ambassadors of both countries, at the bridge’s midpoint.

Maduro did not attend the ceremony at the bridge. He has curtailed his public appearances in relatively uncontrolled spaces since 2018, when two drones detonated explosives near him during a military parade in Caracas, Venezuela’s capital.

Colombia and Venezuela share a border of about 1,370 miles (2,200 kilometers). Bandits, drug traffickers, paramilitary groups and guerrillas take advantage of the remote and desolate landscape to operate, though that did not deter legal trade before Maduro ordered the closure of official border crossings.

All but two of the bridges are within a 45-mile (75-kilometer) stretch, which before the shutdown handled 60% of commercial activity between the neighbors.

Javier Pabón, president of the board of directors of the Cúcuta Chamber of Commerce, said that reopening the bridge to commercial traffic can discourage smuggling because business owners would prefer to export their products legally with all guarantees.

“It will reduce the illegal intermediation that occurs toward Venezuela,” Pabón said.

In addition to controlling smuggling, one of the main challenges the governments face is guaranteeing security along the border, where there is a presence of illegal armed groups, such as the guerrilla National Liberation Army, the Clan del Golfo and breakaway members of the extinct Revolutionary Armed Forces of Colombia.