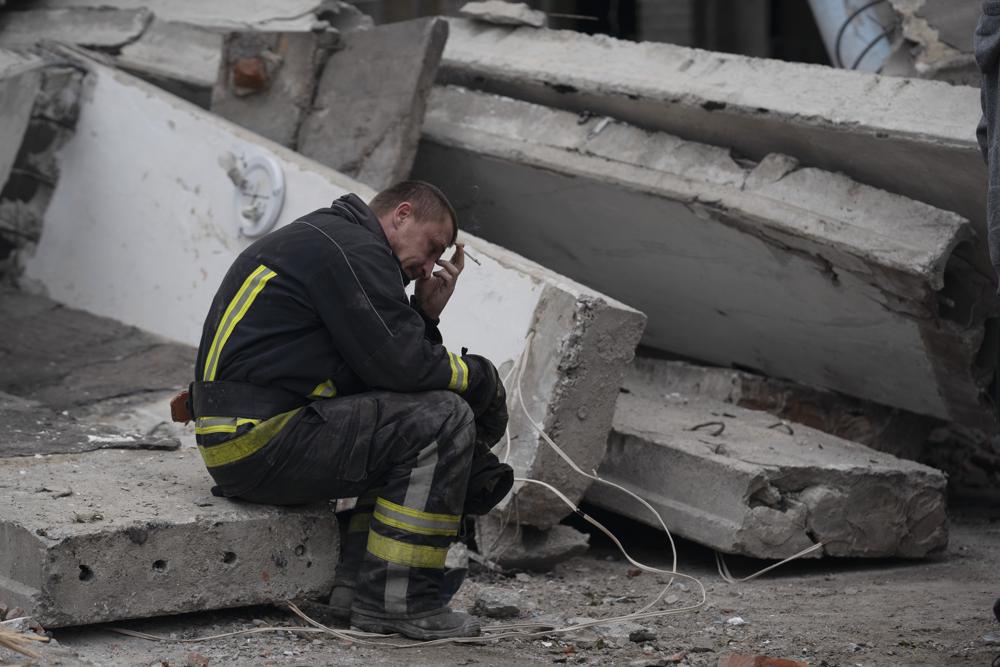 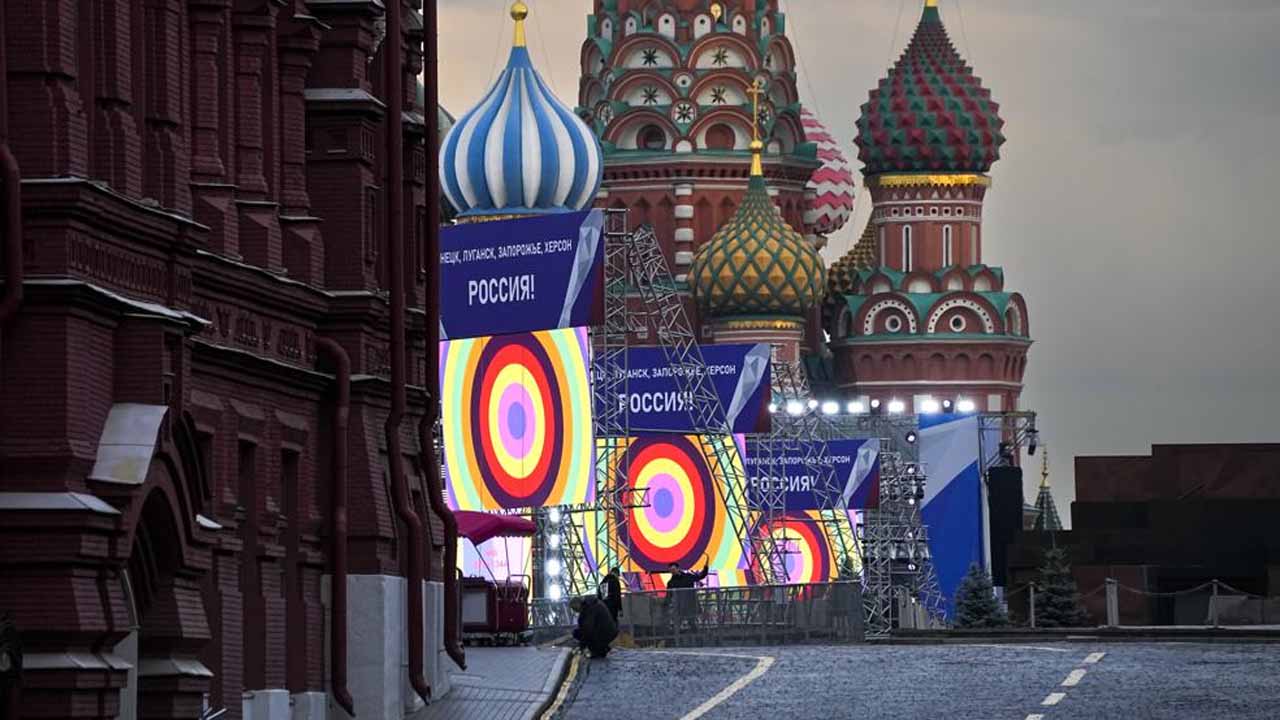 Russian President Vladimir Putin opened a Kremlin ceremony Friday to start the process of absorbing parts of Ukraine into Russia by saying he would sign laws to annex them despite international condemnation and protect the newly incorporated regions using “all available means.”

The annexation ceremony in the Kremlin’s opulent white-and-gold St. George’s Hall was organized for Putin and the heads of the four regions of Ukraine to sign treaties for the areas to join Russia, in a sharp escalation of the seven-month conflict.

At the beginning of the event, Putin urged Ukraine to sit down for talks but warned that Moscow would not give up the newly incorporated regions.

The ceremony comes three days after the completion of Kremlin-orchestrated “referendums” on joining Russia that were dismissed by Kyiv and the West as a bare-faced land grab, held at gunpoint and based on lies.

The separatist Donetsk and Luhansk regions in eastern Ukraine have been backed by Moscow since declaring independence in 2014, weeks after the annexation of Ukraine’s Crimean Peninsula. The southern Kherson region and part of the neighboring Zaporizhzhia were captured by Russia soon after Putin sent troops into Ukraine on Feb. 24.

Both houses of the Kremlin-controlled Russian parliament will meet next week to rubber-stamp the treaties for the regions to join Russia, sending them to Putin for his approval.

Putin and his lieutenants have bluntly warned Ukraine against pressing an offensive to reclaim the regions, saying Russia would view it as an act of aggression against its sovereign territory and wouldn’t hesitate to use “all means available” in retaliation, a reference to Russia’s nuclear arsenal.

The Kremlin-organized votes in Ukraine and the nuclear warning are an attempt by Putin to avoid more defeats in Ukraine that could threaten his 22-year rule.

Russia controls most of the Luhansk and Kherson regions, about 60% of the Donetsk region and a large chunk of the Zaporizhzhia region where it took control of Europe’s largest nuclear power plant.

As it prepared to celebrate the incorporation of the occupied Ukrainian regions, the Kremlin was on the verge of another stinging battlefield loss, with reports of the imminent Ukrainian encirclement of the eastern city of Lyman.

Retaking it could open the path for Ukraine to push deep into one of the regions Russia is absorbing, a move widely condemned as illegal that opens a dangerous new phase of the seven-month war.

Russia on Friday also pounded Ukrainian cities with missiles, rockets and suicide drones, with one strike reported to have killed 25 people. The salvos together amounted to the heaviest barrage that Russia has unleashed for weeks.

They followed analysts’ warnings that Putin was likely to dip more heavily into his dwindling stocks of precision weapons and step up attacks as part of a strategy to escalate the war to an extent that would shatter Western support for Ukraine.

The Kremlin preceded its scheduled annexation ceremonies Friday with another warning to Ukraine that it shouldn’t fight to take back the four regions. Kremlin spokesman Dmitry Peskov said Moscow would view a Ukrainian attack on the taken territory as an act of aggression against Russia itself.

The annexations are Russia’s attempt to set its gains in stone, at least on paper, and scare Ukraine and its Western backers with the prospect of an increasingly escalatory conflict unless they back down — which they show no signs of doing. The Kremlin paved the way for the land-grabs with “referendums,” sometimes at gunpoint, that Ukraine and Western powers universally dismissed as rigged shams.

“It looks quite pathetic. Ukrainians are doing something, taking steps in the real material world, while the Kremlin is building some kind of a virtual reality, incapable of responding in the real world,” former Kremlin speechwriter turned political analyst Abbas Gallyamov said.

“People understand that the politics is now on the battlefield,” he added. “What’s important is who advances and who retreats. In that sense, the Kremlin cannot offer anything сomforting to the Russians.”

A Ukrainian counter-offensive has deprived Moscow of mastery on the military fields of battle. Its hold of the Luhansk region appears increasingly shaky, as Ukrainian forces make inroads there, with the pincer assault on Lyman. Ukraine also still has a large foothold in the neighboring Donetsk region.

Luhansk and Donetsk – wracked by fighting since separatists there declared independence in 2014 – form the wider Donbas region of eastern Ukraine that Putin has long vowed, but so far failed, to make completely Russian. Peskov said that both Donetsk and Luhansk will be incorporated Friday into Russia in their entirety.

All of Kherson and parts of Zaporizhzhia, two other regions being prepared for annexation, were newly occupied in the invasion’s opening phase. It’s unclear whether the Kremlin will declare all, or just part, of that occupied territory as Russia’s. Peskov wouldn’t say in a call Friday with reporters.

In the Zaporizhzhia region’s capital, anti-aircraft missiles that Russia has repurposed as ground-attack weapons rained down Friday on people who were waiting in cars to cross into Russian-occupied territory so they could bring family members back across front lines, the deputy head of Ukraine’s presidential office, Kyrylo Tymoshenko, said.

The general prosecutor’s office said 25 people were killed and 50 wounded. The strike left deep impact craters and sent shrapnel tearing through the humanitarian convoy’s lined-up vehicles, killing their passengers. Nearby buildings were demolished. Trash bags, blankets and, for one victim, a blood-soaked towel, were used to cover bodies.

Russian-installed officials in Zaporizhzhia blamed Ukrainian forces for the strike, but provided no evidence.

Russian strikes were also reported in the city of Dnipro. The regional governor, Valentyn Reznichenko, said at least one person was killed and five others were wounded.

Ukraine’s air force said the southern cities of Mykolaiv and Odesa were also targeted with Iranian-supplied suicide drones that Russia has increasingly deployed in recent weeks, seemingly to avoid losing more pilots who don’t have control of Ukraine’s skies.

Putin was expected to give a major speech at the ceremony to fold Luhansk, Donetsk, Kherson and Zaporizhzhia into Russia. The Kremlin planned for the region’s pro-Moscow administrators to sign annexation treaties in the ornate St. George’s Hall of the palace in Moscow that is Putin’s seat of power.

Putin also issued decrees recognizing the supposed independence of the Kherson and Zaporizhzhia regions, steps he previously took in February for Luhansk and Donetsk and earlier for Crimea, seized from Ukraine in 2014.

“The enemy rages and seeks revenge for our steadfastness and his failures,” he posted on his Telegram channel. “You will definitely answer. For every lost Ukrainian life!”

The U.S. and its allies have promised even more sanctions on Russia and billions of dollars in extra support for Ukraine as the Kremlin duplicates the annexation playbook used for Crimea.

With Ukraine vowing to take back all occupied territory and Russia pledging to defend its gains, threatening nuclear-weapon use and mobilizing an additional 300,000 troops despite protests, the two nations are on an increasingly escalatory collision course.

That was underscored by the fighting for Lyman, a key node for Russian military operations in the Donbas and a sought-after prize in the Ukrainian counteroffensive launched in late August.

”Ukraine’s armed formations,” he said, “are trying very hard to spoil our celebration,”