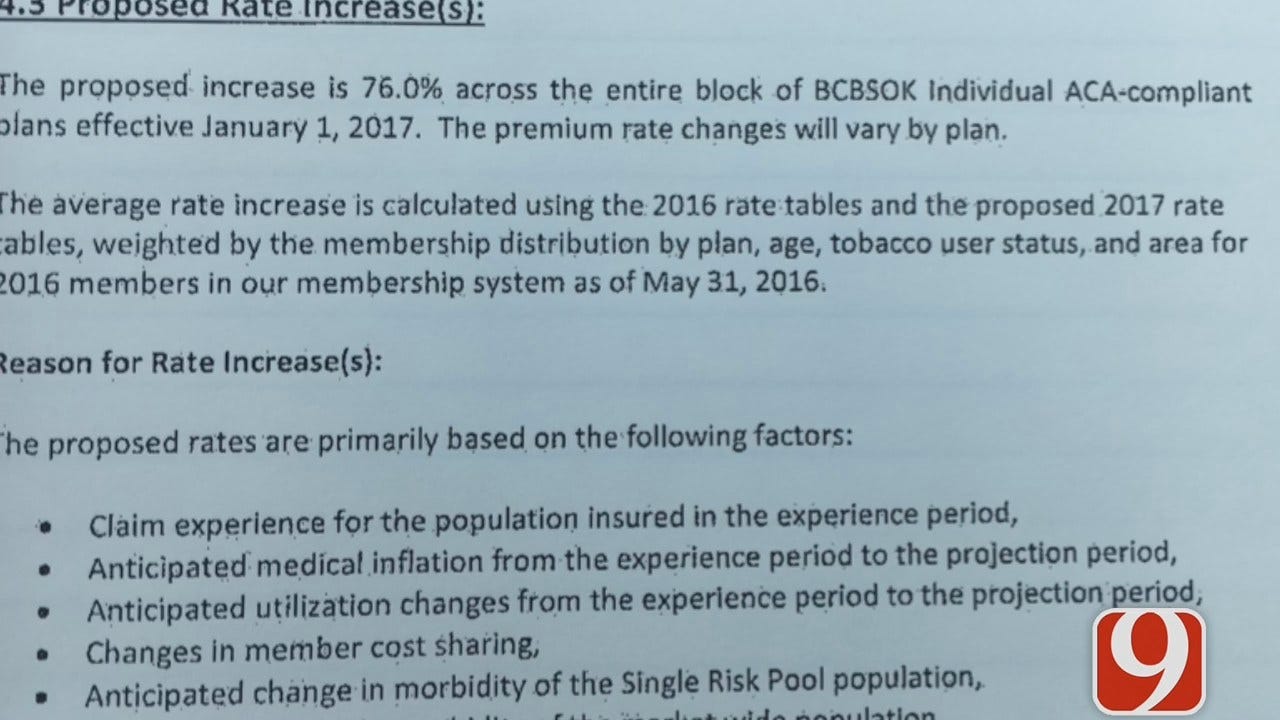 Brace yourself for a big health insurance increase if you have Blue Cross Blue Shield. The company is proposing a 76 percent increase of all individual Affordable Care Act compliant plans.

This rate increase comes as the company faces a $3 million fine from the Oklahoma Insurance Commissioner for poor customer service, the largest fine in state history. In addition, a recent report shows the company's top executives got about $20 million in raises and additional compensation last year.

News 9 spoke with Fred Imel last year at this same time after he learned his health insurance rates were going up. Wednesday, we were back at his accounting office crunching the numbers again on another rate increase.

In a memo obtained by News 9, Blue Cross Blue Shield is requesting an increase of  "76 percent across the entire block of BCGSOK Individual ACA compliant plans."

In a statement Blue Cross Blue Shield said, “Although more Oklahomans receive health coverage than ever before, BCBSOK has experienced significant losses in the retail market. Since 2014, combined losses are more than $300 million.”

Yet Modern Healthcare reports the top 10 executives with BCBS's parent company HCSC received $56.7 million in salary and bonuses in 2015. That's 57 percent increase over the year before.  The former CEO received a $1.5 million salary and nearly $15 million bonus.

When it comes to executive compensation, BCBSOK issued this statement; “Our compensation is consistent with industry standards and incentive packages are directly tied to the overall performance of the company, not just financials.”

That's despite major fines from several states including Oklahoma for poor customer service.

“We found some issues, some things that are very troubling for consumers,” said Oklahoma Insurance Commissioner John Doak.

In September the Oklahoma Insurance Commissioner fined the company $3 million for problems including billing and claim handling issues. Doak has given the company a year to fix the problems.

If the company does indeed fix the customer service issues the fine will be revoked.

Here is the full statement from BCBSOK:

"Blue Cross and Blue Shield of Oklahoma (BCBSOK) has been serving the state for 76 years, and is committed to providing quality health insurance options to Oklahomans in a sustainable way. Since the implementation of the Affordable Care Act (ACA), we have been successful in helping more Oklahomans get individual health coverage -- many of whom have never been insured and had pent up health care needs.

"Rates are based on several factors, including anticipated medical care costs, pharmaceutical cost and utilization, among other variables. Our increase is an average, and rates may be well below or above this rate. The rate increases only apply to 20 percent of our members who purchase individual coverage – not members who have group coverage through their employers. About 86 percent of BCBSOK members who purchase a plan on the Health Insurance Marketplace receive a premium subsidy, and for many of them, the subsidies will cover the bulk of the premium increase. As rates increase, so do the subsidies available to offset the cost of individual premiums.

"Although more Oklahomans receive health coverage than ever before, BCBSOK has experienced significant losses in the retail market. Since 2014, combined losses are more than $300 million. While other companies have exited the Health Insurance Marketplace in Oklahoma, we continue to offer coverage in all 77 counties--this shows our commitment to the health and wellness of all Oklahomans.

"Our compensation is consistent with industry standards and incentive packages are directly tied to the overall performance of the company, not just financials.  As a member-owned company, only a small fraction of a cent from every premium dollar received goes toward executive pay. The key to lowering insurance premiums is to recognize and deal with rising medical costs, and making sure everyone enrolls in coverage. BCBSOK is leading the transition from fee-for-service to value-based care models in Oklahoma, providing our members with improved health outcomes while driving down the cost to deliver care.

"ACA plans on the individual market must spend at least 80 percent of each premium dollar collected, to pay for medical care and activities that improve health care quality for members. If health plans fail to spend at least 80 percent on medical claims and health care quality initiatives, they are required to give back money to consumers through a premium rebate. While we have adjusted our rates for 2017, our pricing assumes we will once again exceed the 80 percent threshold.

"Consumers may visit our Subsidy Estimator, available in both English and Spanish, at http://www.bcbsok.com/insurance-basics/understanding-health-insurance/premium-tax-credit-estimator to determine if they qualify for financial assistance and also get an estimate of their potential subsidy. As we head into open enrollment, we want to remind consumers currently receiving financial assistance to update their financial and family information with the government by December 15, 2016 to ensure they receive the proper amount of assistance for 2017."