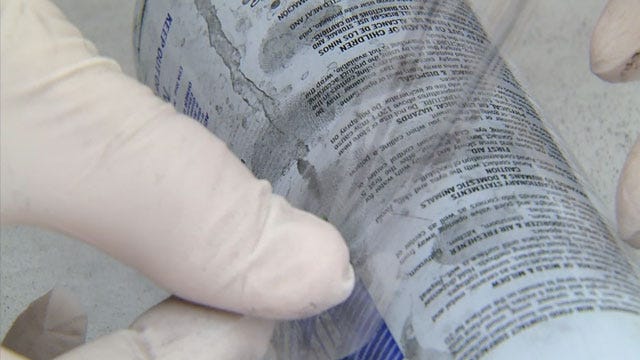 With the sweep of a brush and some fingerprint powder, a detective can find a seemingly invisible latent print. It can ultimately lead them to a suspect or suspects.

But News 9 learned that just because a print is taken, doesn't mean it is going to be used to solve the case.

Jack Poe, who is a retired police chaplain, said someone broke into his Mazda Miata outside his home nearly four years ago. And even though they got a clear set of prints, nothing was ever done with them.

"We called, and an officer came out and took time to take prints off the car," Poe said. "And we found prints on the mirror where he had put his hands to lean in and get stuff out!"

Poe said the thief got away with his badge, a GPS and even a tire repair kit locked in his trunk.

"Nobody can use that unless they have a Miata," Poe said. "He stole stuff that didn't do anybody any good!"

The prints found by the Oklahoma City detective who dusted for prints were run through the AFIS national database and hit on a person with a long criminal record. But nobody was ever arrested or charged.

Poe said he doesn't know who decided not to follow through. He just knows that no one ever did.

"It can be frustrating," said Ron Wortham, who is in charge of the Oklahoma City Police Department's latent print division. "Because you don't want to put an innocent person in jail, you just don't want that to happen."

Wortham confirms sometimes prints found outside -- on cars or other places of public access -- can't be used against burglary suspects.

"A defense attorney or suspect could say 'Sure my fingerprints are on it, I saw him at the gas station, I walked by and touched it,’” said Wortham. "So you're not proving that individual is inside that vehicle."

But Poe doesn't blame the police department, or the district attorney’s office for not following through. He blames the system.

"The backlog these people have is unbelievable," said Poe, who would know since he spent decades on the Oklahoma City police force. "The problem is the DA and the police department both are understaffed."

Wortham confirms that is definitely the case.

He says back five years ago, the latent print division had absolutely no backlog on cases. But then two of their latent examiners retired, leaving one person to do all the work. Although two more examiners were hired, they had to undergo two years of training. And a part time examiner also filled in the gaps.

"When a case comes in and we're working it, it doesn't just stop with one person picking up," Wortham said. "Looking at fingerprints, making a report, it goes on and on. That all has to be verified. So it takes a minimum of two examiners per case."

But to this day, there are still hundreds of cases that need to be examined.

Will those ever be completely investigated?

Or will they sit on a shelf for many more years?

"They will be investigated as we get to those," Wortham said. " I can't give you a time period on how long it will take, because that depends on what the case is."

Wortham says some cases take just an hour to process, but some can take weeks, even months. But even with good fingerprints, some of them may end up saved and filed away - never to be used to arrest or prosecute the perpetrator in the original case.

Cases just like Jack Poe's, which years later, are all but forgotten.

In his case, Poe is just glad the thief did not get away with his limited edition money clip he left lying in the car.

It was made to honor all officers killed in the line of duty, and has sentimental value. Something that can never be replaced.

And grant money has been approved to work the backlog of cases.

Last year alone, the Oklahoma City Police Department ran and compared prints from more than 46,000 people. They were able to make more than 1,600 ID's off the fingerprints they ran.