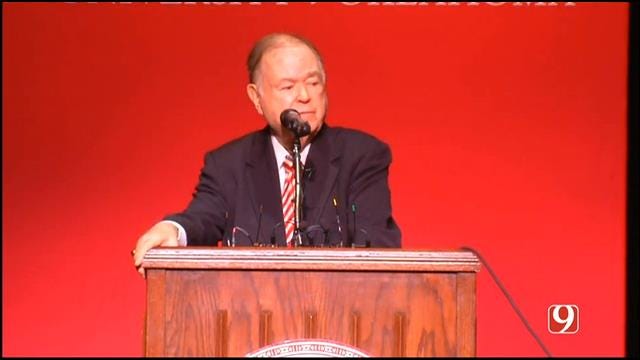 In the brief video, you can hear and see the members loudly chanting together, "There will never be a n***** SAE." SAE is a reference to the fraternity's Greek letters. The chant repeats the first verse, then goes on to say, "You can hang them from a tree, but they'll never sign with me."

"To those who have misused their free speech in such a reprehensible way, I have a message for you. You are disgraceful. You have violated all that we stand for. You should not have the privilege of calling yourselves “Sooners.” Real Sooners believe in equal opportunity. Real Sooners treat all people with respect. Real Sooners love each other and take care of each other like family members.

Effective immediately, all ties and affiliations between the university and the local SAE chapter are hereby severed. I direct that the house be closed and that members will remove their personal belongings from the house by midnight tomorrow. Those needing to make special arrangements for positions shall contact the Dean of Students.

All of us will redouble our efforts to create the strongest sense of family and community. We vow that we will be an example to the entire country of how to deal with this issue. There must be a zero tolerance for racism everywhere in our nation."

The President later tweeted, "Thank all of you who came to the rally this morning to demonstrate the true values of our university."

During a news conference Monday morning, President Boren said the University has a zero tolerance for racism.

"These people don't deserve to be called 'Sooners.' Sooners are not racists and bigots," said President Boren. " As they pack their bags, I hope they think long and hard about what they've done."

President Boren also spoke with students who participated in a silent demonstration Monday morning.  Nearly 200 students gathered at the OU campus to protest against the video.

"I want to commend our students who stood out for our real values. They have my full support," the President said during the news conference.

All fraternity members have until midnight to move their belongings out of the building, and the fraternity house will be shut down.

"As far as I'm concerned, (the fraternity) will not be back. Not as long as I'm president," Boren said during the news conference.

President Boren then stated that he appreciate those who exposed these kind of activities, so the University can take actions.

At the end of the news conference, Presidents Boren said OU investigators are working to identify the students involved in the video. The University will then decide if the students can be expelled from the school.

Sigma Alpha Epsilon's national headquarters has confirmed the students in the video are from its OU chapter and they have taken swift action. All of the members have been suspended, and those members who are responsible for the incident may have their membership privileges revoked permanently.

Leadership at the Sigma Alpha Epsilon national headquarters issued a press release saying that they will in fact close the SAE chapter at the University of Oklahoma.