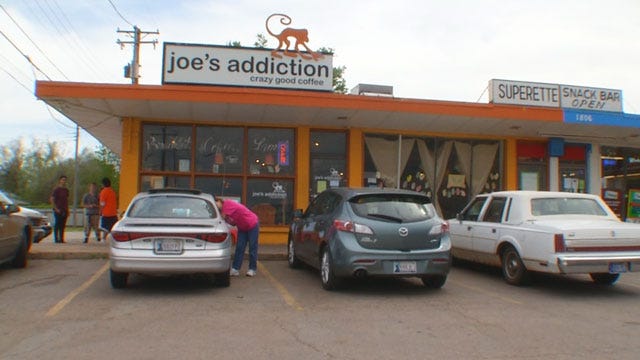 A local city council is pouring over plans to close a coffee shop it claims attracts ex-convicts and sex offenders. But the business owner is not standing down. She questions why her shop is a target, even though she's surrounded by adult entertainment.

A Valley Brook city council member admits, there's a lot of unanswered questions. The owner of Joe's Addiction says there's bigger problems in town, and it's not the coffee shop.

Strip clubs sit on both sides of Joe's Addiction, and have been a money engine for the small metro town for years.

"Much of what we do here in the coffee shop in the way of helping people, we see as cleaning up what the sex industry is producing," said owner, Jamie Zumwalt.

Zumwalt says Joe's addiction is not your ordinary neighborhood coffee shop by any means. The shop doesn't discriminate against anyone.

"As a business, legally, I can't discriminate and say you're not allowed to come in here, so to my understanding, we are following the law on that," said Zumwalt.

Zumwalt wrote a detailed letter to the Valley Brook City council and the citizens essentially pleading that her shop is not closed. She believes there are misunderstandings, rumors, and even lies that are fueling the push to shutter her business.

Ex-convicts, homeless, sex offenders and even victims of sexual assault are regulars at the coffee shop. Residents don't want them in town.

"I think there are some very legitimate concerns that are based on real concerns for their children's safety, so I know some if it's coming from that," said Zumwalt.

But she says it's not Joe's Addiction, it's the sex offender and homeless problem; a problem already in town before she opened six years ago.

For people like Allen Hays, it's a place that's helped him fight a 20-year drug addiction.

"It feels good to have a place to go to that's positive," said Hays. "I'm 60 days clean off drugs, alcohol, everything."

Jamie says she's had the opportunity to change many lives over the years at her coffee shop, which has evolved into a daily ministry for those in need.

The Valley Brook City Council will meet next week to consider closing the shop again, after the decision was tabled in April.