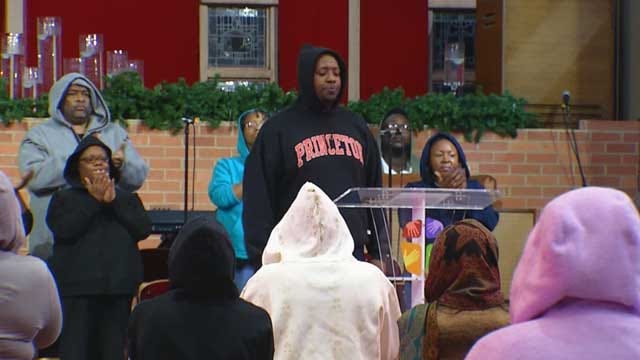 Several pastors in the state took to the pulpit Sunday morning in protest. They wore hoodies to church to stand in solidarity against a bill proposed by an Oklahoma senator.

Republican Sen. Don Barrington out of Lawton introduced a bill for the upcoming legislative session that gained a lot of attention. Part of that bill would make it illegal for someone to intentionally conceal his or her identity in a public place by using a robe, mask or other disguise.

The bill doesn't specifically mention the word 'hoodies', but several church leaders in the metro and across the state still sent a message to lawmakers by wearing them.

More than 50 members at The Christ Experience in Oklahoma City met for church on Sunday for a special service led by pastor Semaj Vanzant, who wore a hoodie.

Most members wore them, too. They were protesting from the pews a proposed law that would make it illegal for anyone to hide their identity in a public place.

Church members said they want to protect that kind of freedom because they fear legislation like this could lead to discrimination or profiling.

The law would also make it illegal for anyone to conceal their identity during the commission of a crime.

The proposed bill has a few provisions for wearing clothing that covers your face, like religious beliefs, or Halloween, special events like a parade, masquerade party and weather.