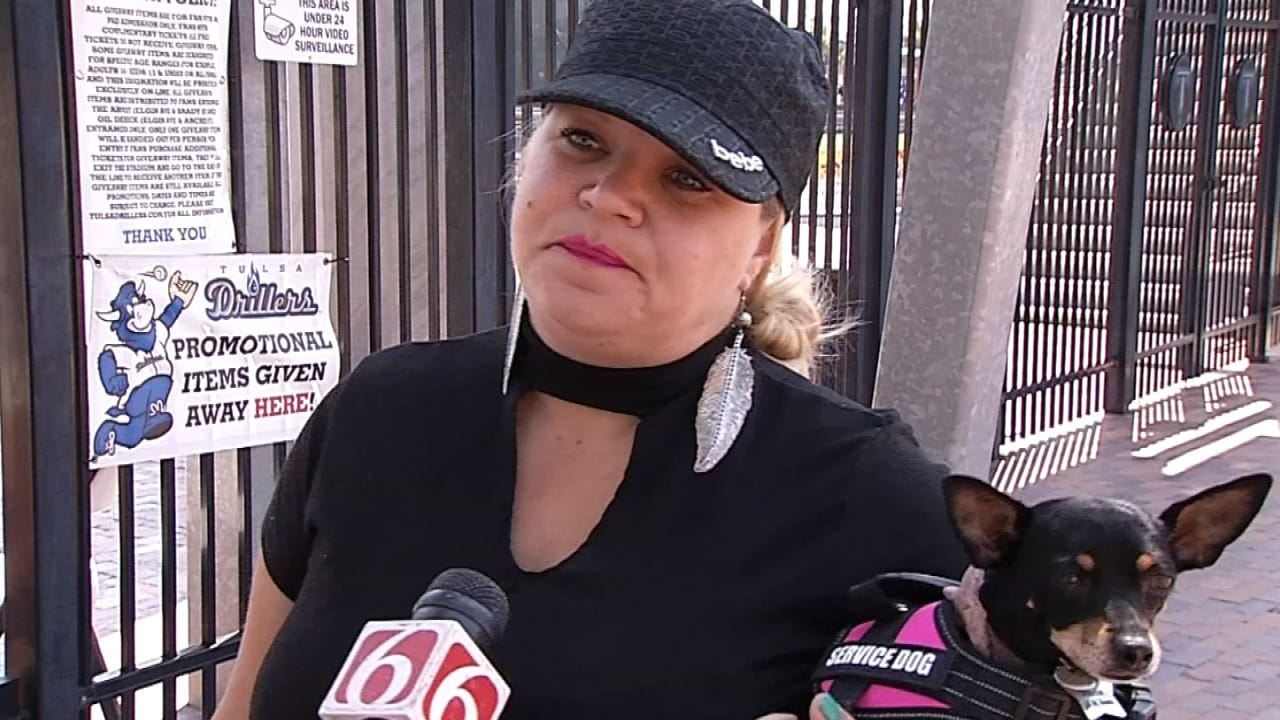 A Tulsa woman says she may sue after she was denied access to a Drillers game because of her service dog.

However, The Drillers told News On 6 that they followed protocol from the Americans with Disabilities Act.

Natalia Duran said she tried to attend Sunday night’s Driller's game with her service dog Madalyn but the staff at the gate said Duran didn't provide enough information to prove her dog was indeed a service animal.

Madalyn and Natalia go everywhere together and it has been that way for the last three years.

"Four years ago, I was brutally beaten and stabbed and that's how I obtained PTSD,” Duran said.

She said she went to a doctor but didn't want to take medication so he suggested she get a dog.

Now, when she goes into full anxiety attacks, Natalia has trained Madalyn to decrease her symptoms and has her officially registered through the United States Service Dog Registry.

Sunday night, she tried to get into the Drillers game with her Chihuahua and said several people at the gate denied her, then she started rolling on her cell phone.

Gate attendant: "What is the dog specifically trained to do?”

Natalia: "Because I have PTSD she provides emotional support.”

Gate attendant: "No, that's not specifically trained to do anything. I've got the ADA requirements right here."

The attendant was correct, American Disabilities Act standards require a service animal to provide a specific action as Natalia said her’s does.

“The command she is trained to do is to comfort me during an anxiety attack and if I don’t respond she will come and nag at me and paw at me,” Duran said.

But Natalia said by the time the third person started asking, she stopped going into specifics.

“I had already said so much about my PTSD in front of a whole line of people, so I didn't want to keep going on about it and I felt backed into a corner,” Duran said.

The ADA says if the dog's mere presence provides comfort, it would not be considered a service animal.

A Drillers spokesperson said they followed proper protocol and told "a service dog that met the ADA criteria of performing a specific task that helped with a disability was allowed into ONEOK Field earlier this same evening."

They also released this statement:

A situation occurred Sunday night at the Tulsa Drillers game where a person who was accompanied by a dog was denied entrance into the stadium.  In the situation, which was recorded by the person, a team staff member followed proper protocol in determining whether the animal should be admitted to the stadium as a service dog.  The protocol that was used comes from the American with Disabilities Act (ADA) guidelines for public facilities.  Those guidelines provide the ADA definition of what constitutes a service dog.  The guidelines are available through the ADA website at:

Frequently asked Questions 1, 2, 3 and 17 provide information that the staff member used in this instance to allow or deny entry.

We encourage members of the media to review the ADA guidelines prior to reporting on this situation.  In addition, we have been given the Justice Department Press Office’s Phone Number of 202-514-2004.  The Department has offered to field questions at this number from anyone regarding ADA service dogs.