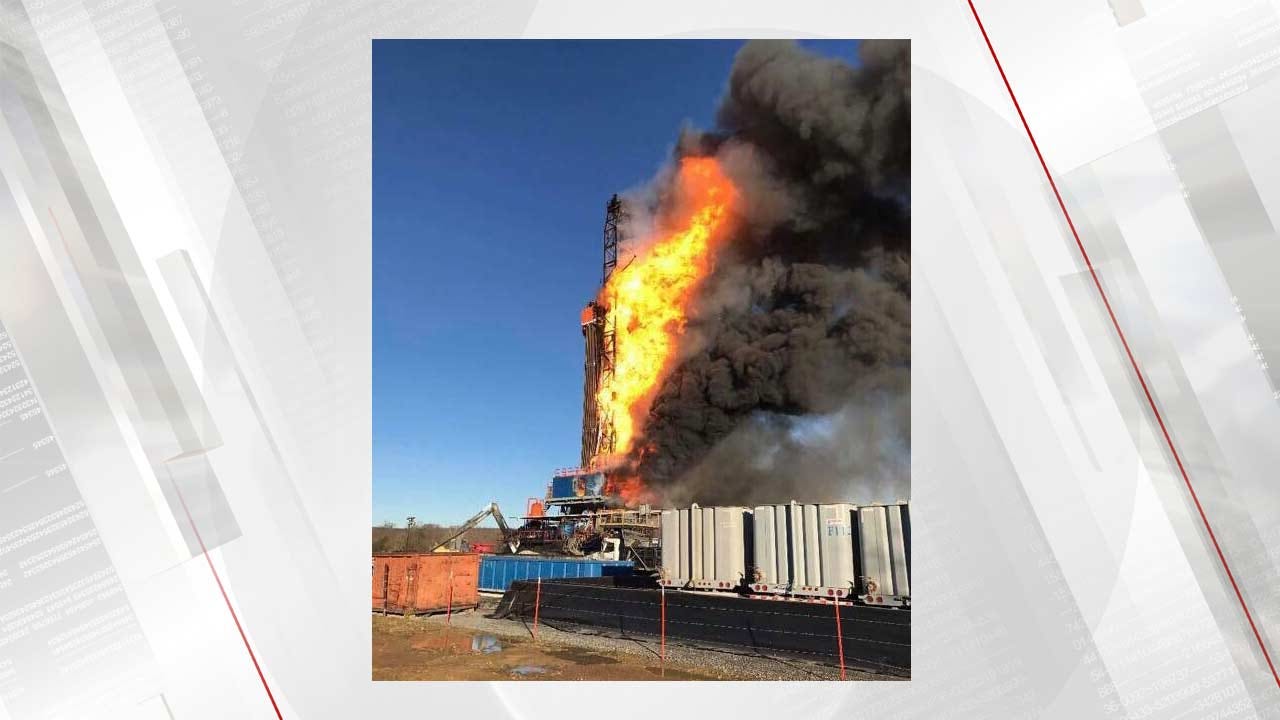 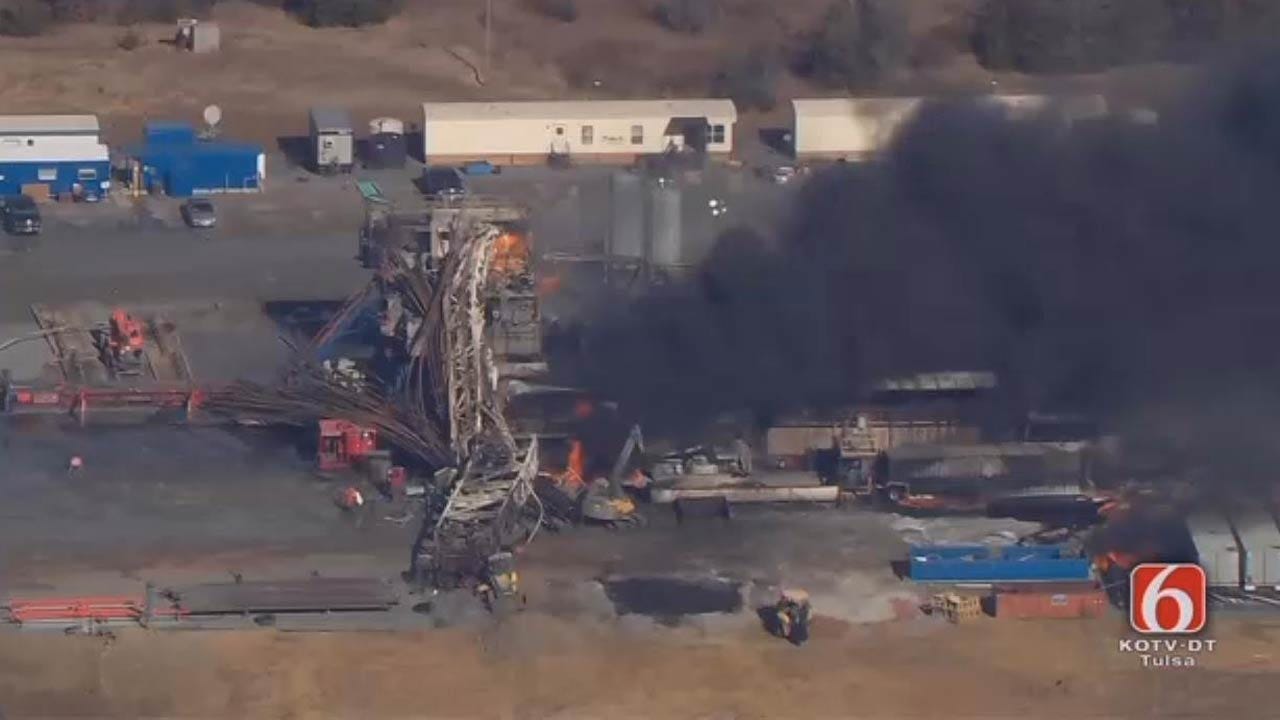 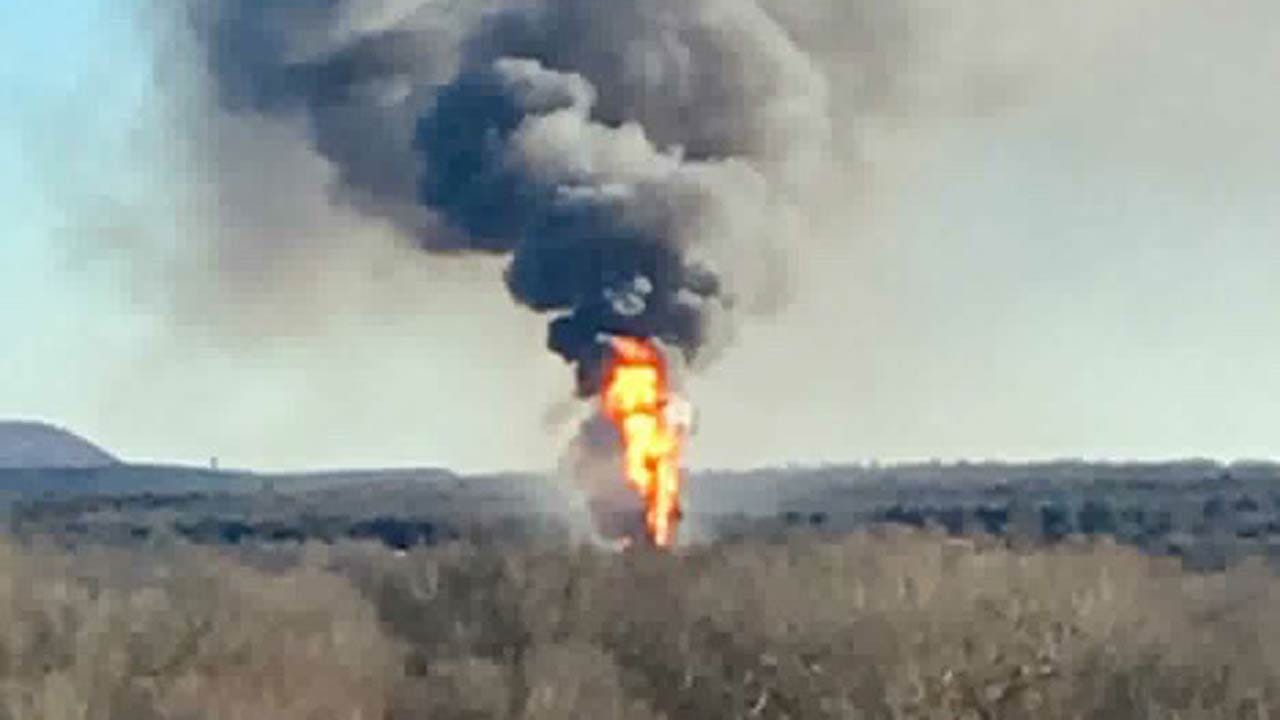 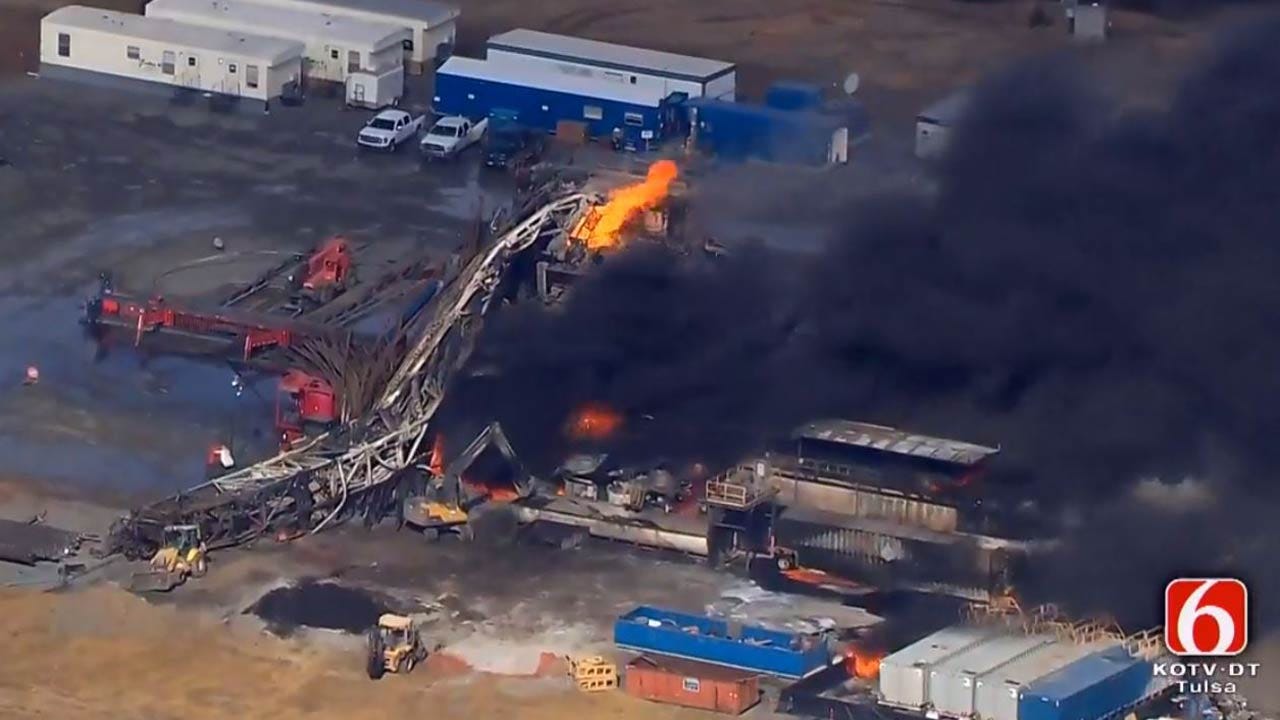 Five people are missing after an explosion and fire at a natural gas drilling rig in Pittsburg County, according to Emergency Manager Kevin Enloe.

The fire is west of Quinton, between that city and Featherston.

The explosion took place a little before 9 a.m., sending flames shooting 50 feet in the air.

“When the first responders showed up, the workers from the drilling rig were walking down the road away from the well,” Enloe said.

Firefighters got closer, hoping they could put out the fire and help anyone left on the well, but there was nothing they could do without more help.

The Pittsburg County sheriff said about two-dozen people were working on the rig when it exploded. Emergency crews accounted for 17 of them, with five still missing.

The wind pushed the fire to surrounding tanks and pasture land. Video from Osage SkyNews 6 HD shows the heat from the fire eventually caused the derrick to collapse. Flames then spread across the site.

“We started an initial attack on the well, but we had to be pulled back because of several secondary explosions, and then just set up containment until the well control folks got on scene,” Enloe said.

The Oklahoma Highway Patrol, the Pittsburg County Sheriff's Office and other first responders have been on the scene. Enloe said they don't know what could have caused the rig to explode.

During a news conference Monday, officials said firefighters were not battling the primary fire at the rig head, but had crews set up around the area to fight any fires that pop up due to flames.

As of 3:30 p.m., the secondary fires are out but the head is still burning at the collapsed derrick. Red Mountain Energy, the operator at the well, will control the fire coming out of the head, Enloe said. Red Mountain Energy is located in Oklahoma City.

Emergency management officials said the rig is owned by Patterson UTI, which is based in Houston. According to the company's web site, it is Rig #219. The company is contacting family of the missing.

A fire control team from Houston arrived Monday afternoon to put out the fire and shut down the well.

“They're just checking everything, trying to get everything cooled down on location, but it's still hot and there's still a lot of gas coming out of the wellhead,” Enloe said.

Authorities do not expect to get into the wreckage Monday evening.

The Pittsburg County Sheriff's Office said family members of the workers could also contact that department at 918-423-5858.

At least three medical helicopters landed at the site following the explosion, Enloe said. One person was taken to the hospital with burns, authorities confirmed in an afternoon update. That person initially refused treatment but was taken to a burn unit after their pain increased.

Authorities searched the wooded area around the well but have not found any of the missing people.

The images from Osage SkyNews 6 HD show the toppled derrick lying twisted on its side, with a pile of drilling pipe scattered along the side.