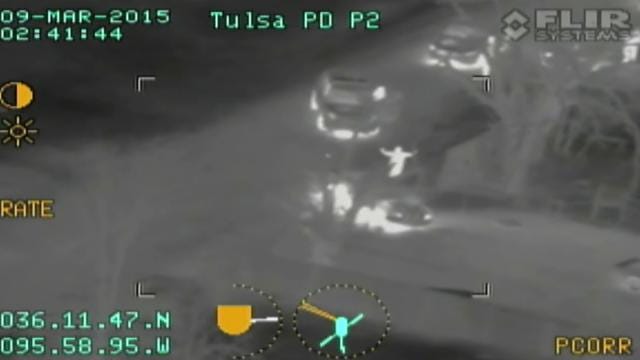 News On 6 is getting a rare inside look at a police chase from 1,500 feet in the air.

The Monday chase started in midtown Tulsa and went all over Osage County, lasting nearly an hour. The helicopter footage is infrared and shows heat coming off cars, tired and people.

Officer Byron Barnhart is flying the helicopter called Police Two and his observer is Officer Dave Shelby. Shelby keeps track of the suspect from the air so officers on the ground can pull back.

"Still westbound. You do have one vehicle in front of you in the outside lane,” Shelby relayed.

"We need to let the helicopter call it and let the ground units terminate," their supervisor said. "901, we've all terminated the pursuit."

That doesn't stop the driver from still being a danger to others.

"Okay, he just turned off his lights and is going on the Tisdale Expressway, northbound," Shelby said.

The driver turned his lights off and on, sped up and slowed down and wound his way through Osage County. Officers notified deputies and OHP and requested stop sticks.

Shelby: "Can anyone advise if that's a patrol unit? He's approaching you now. He's the only vehicle westbound on 53rd street north."
Officer: "Baker 106, it's me. I've got stop sticks out on him."
Shelby: "10-4, you should have eyes on him now. He's coming up to you. Okay, he stopped and went around the stop sticks."

He did a U-turn in someone's yard, and they tried stop sticks one more time. This time, he drove over them and, not long after, his tires started flinging hot rubber onto the road, but he kept going.

The chase kept going, even though, at times, the driver only went five miles an hour, then, finally, he pulled into a driveway on North Hartford and gave up.

They arrested Shawn Stevens. They said he had a felony warrant and was driving with a tag that didn't belong to the truck.

An Osage County reserve deputy on his way to the pursuit rolled his vehicle and was ejected. It landed on him, but because it was muddy, his only injury was about a dozen stitches to his head.