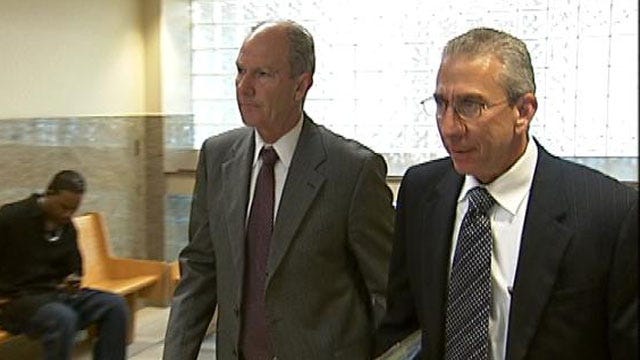 Johnson was superintendent of Skiatook Schools when a state audit revealed last year the district had wasted half a million dollars in overpriced goods.

Johnson admitted to accepting bribes from Rick Enos of E&E Sales, a contractor for the school system.

According to an affidavit, Enos said Johnson admitted to a "mutually beneficial business relationship" where Enos sold school supplies and security equipment to Skiatook Public Schools for inflated prices.

Auditors found Enos sold the district supplies at a markup of 100 to 200 percent.

Read affidavit filed with the court.

Read information filed with the court.

Enos would give money to Johnson at the Skiatook Administrative office "in large denominations and in an envelope hidden inside something so as not to be detected by casual observers."

Enos would say to Johnson, "This is just between us," the affidavit states.

Johnson believes the total amount was as much as $28,800 in 2008. The charges are for four instances of bribery that took place in the administration building while other exchanges were made in locations outside Tulsa County's jurisdiction.

"It was understood between Gary Johnson and Rick Enos that the exchange of money was to be kept a secret and that Gary Johnson was to continue recommending that Skiatook Public Schools order janitorial supplies and security equipment from Rick Enos and E&E Sales, Inc. and Austin Security Company despite the fact that the prices for such supplies greatly exceeded the market value for the same," the affidavit states.

A warrant has been issued for Enos' arrest.

"Having worked with Mr. Johnson, he is remorseful," Harris said. "He understands that what he did was wrong. He's coming forward by pleading guilty and accepting responsibility. The consequences have yet to be determined."

Harris said this investigation is ongoing and involved federal officials.

Johnson's sentencing is scheduled for October. He faces up to 10 years in prison and a possible fine of up to $5,000 for each count of bribery.

"I have entered a plea of guilty today to four counts of accepting a bribe. My actions occurred while I was superintendent of Skiatook Public Schools and present a breach of the trust that had been placed in me by the students, parents, teachers and officials in Skiatook.

When My actions initially came to light, my first reaction was to deny, rationalize and attempt to explain them away. This only compounded the problem I had caused. I soon realized that the only thing to do was to admit what I had done and attempt to rectify the situation, accepting whatever punishment is deemed appropriate.

I apologize to everyone who has been affected by my actions, and I hope for their eventual forgiveness."