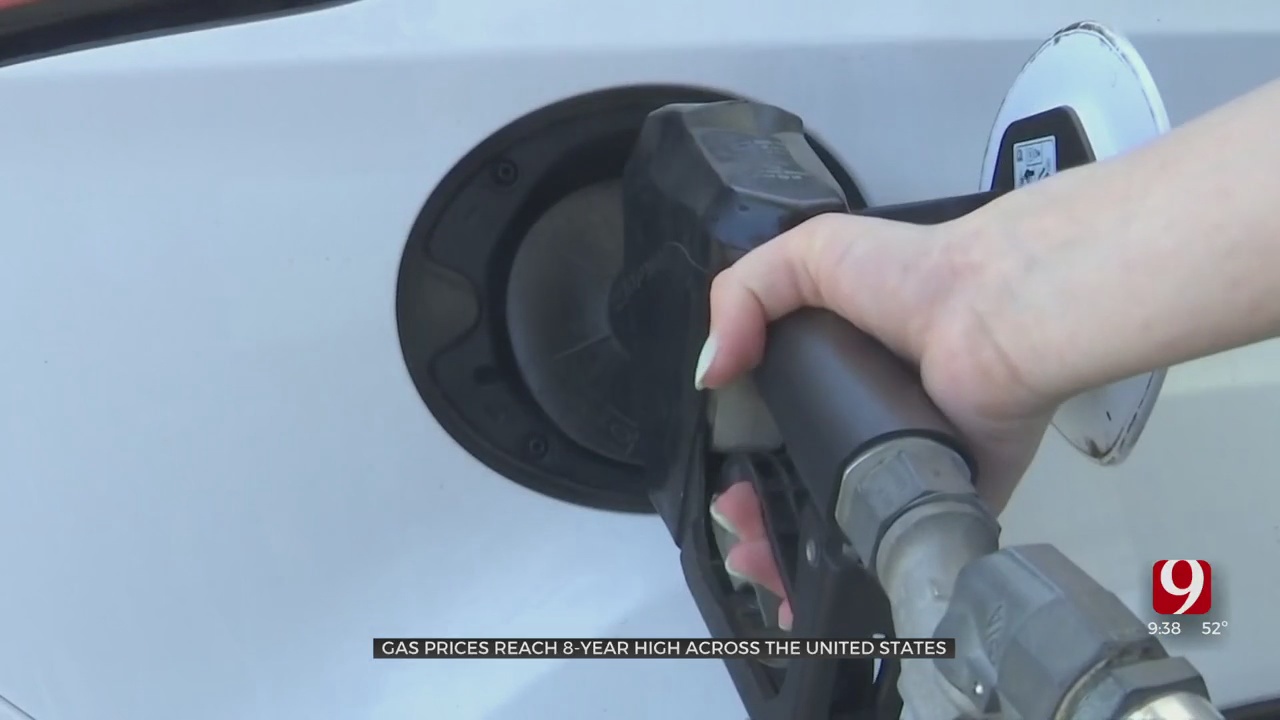 Gasoline prices across the U.S. are surging to the highest level in eight years as the price of crude oil rises, spiked by worries about geopolitical tensions in Eastern Europe.

The average price of a gallon of gas hit $3.47 on Wednesday, according to AAA, a jump of eight cents from the previous week. Gas prices this week are at their highest since October 2014, according to the U.S. Energy Department.

While gasoline prices typically dip in the first months of the year as Americans wait out cold weather indoors, this year has been different. Oil traders, anxious over the ongoing tensions between Russia and Ukraine, have bid up the price of crude oil to more than $90 a barrel.

"This has not been demand-driven, but it has been supply-driven, and recently we've seen crude oil prices move on the basis of geopolitics. A lot of what-if scenarios: what if Russia does invade Ukraine and we have sanctions?" Tom Kloza, global head of energy analysis for the Oil Price Information Service, told CBS MoneyWatch.

Russia produced more than one-tenth of the world's oil in 2020 — a sizable portion that would be disrupted with military conflict or threatened sanctions by the U.S. and its allies.

While the price of Brent crude oil, the international benchmark, has fallen from earlier in the week, is was at $91 on Wednesday, or 50% higher than it was at the start of last summer.

"When oil gets pricier, it's reflected at the pump right away, but when the price of oil drops it seems like it takes forever for the price of gasoline to follow through," he added.

About half of the cost of gasoline comes from the price of crude oil, according to the Energy Information Administration. The rest is made up by the cost of refining, transportation and federal and state taxes.

Production and refining down

Oil-producing countries have been slowly ramping up their output, but global oil production is still below its pre-pandemic levels and lags consumption.

U.S. drivers are also affected by refinery closures, OPIS' Kloza said. Since last year, hurricanes along the Gulf Coast as well as Shell's decision to close a large refinery near New Orleans have reduced the nation's refining capacity by about 3%. "It's enough to make a difference," he said.

Next year, several large refineries are slated to open around the world, but until that time, oil prices will likely keep rising, analysts say. Some Wall Street banks are expecting crude prices to hit $120 a barrel, which would break historical records.

"This year, if I had to bet on it, I would bet that we'll see the highest gasoline price average for the country that we've ever seen, but it's not going to represent the new normal," Kloza said. The record-high average price of gas in the U.S. is $4.11 a gallon, set in July 2008.

What can government do?

Several Democratic senators have called for a suspension of the federal gas tax for the rest of the year, which would save motorists about 18.5 cents a gallon. States from Washington to Rhode Island have eyed similar moves with their local taxes.

The Biden administration is also in talks with other nations to ramp up oil production or open up oil reserves, potentially repeating a November release of the oil emergency fund that temporarily blunted gasoline prices. Beyond that, the government's options are limited, said AAA's Gross.

"There are not a lot of tools that any administration, either Republican or Democrat, can [use], just because so much of what we pay at the pump is wrapped up in the price of oil," he said. "That shows the pickle we're in, because we are so fossil-fuel dependent."