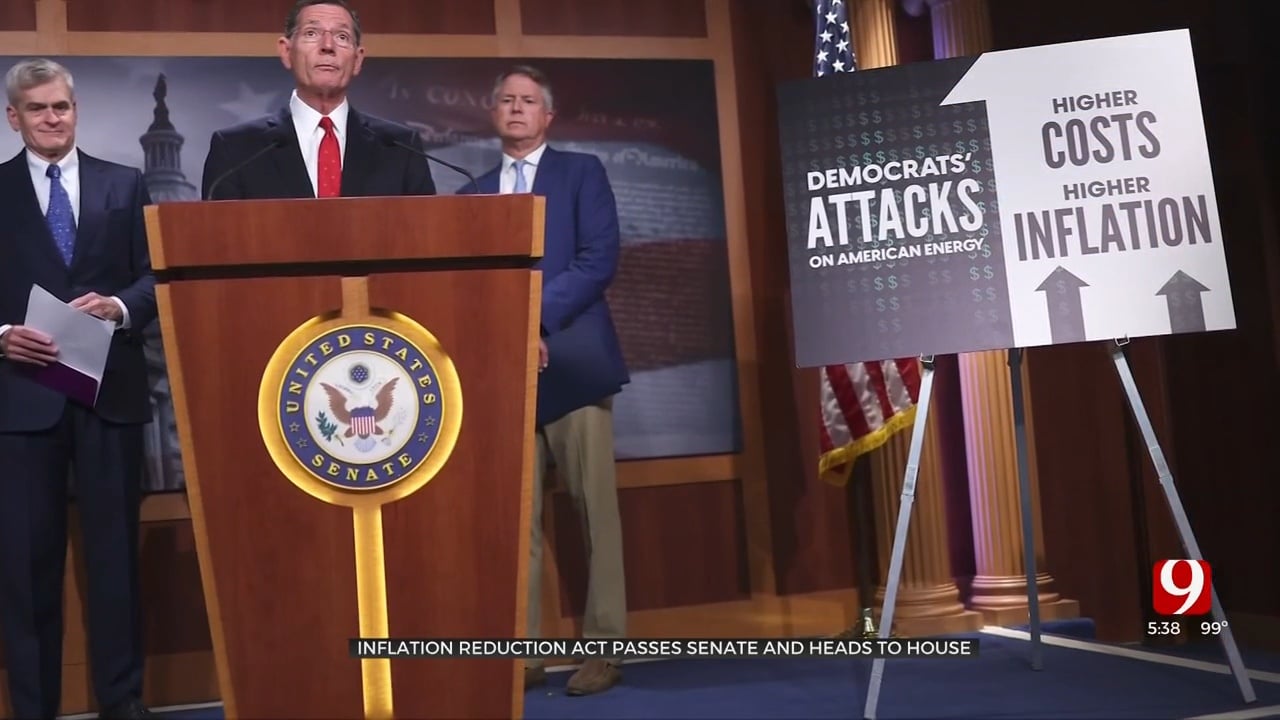 The Senate on Sunday passed Democrats' sweeping economic package designed to combat climate change, address health care costs and raise taxes on large corporations, marking a crucial achievement for President Biden and his party as they look to maintain their hold on Congress in the November midterm elections.

The plan, called the Inflation Reduction Act, cleared the upper chamber by a vote of 51 to 50 along party lines, with Vice President Kamala Harris providing the tie-breaking vote in the evenly divided Senate. Democrats used a fast-track legislative process known as reconciliation to pass the measure in the face of unanimous opposition from Republicans.

"It's been a long, tough and winding road but at last, at last, we have arrived," Senate Majority Leader Chuck Schumer said in remarks on the Senate floor as members prepared to vote for final passage. "Today, after more than a year of hard work, the Senate is making history. I am confident the Inflation Reduction Act will endure as one of the defining legislative feats of the 21st century."

The vote came after a marathon session that lasted through the night and into Sunday afternoon, with Democrats breaking into applause as members cast their final votes. In a process known as a "vote-a-rama," Republicans offered a slew of amendments that Democrats successfully swatted down over nearly 16 hours of debate.

GOP senators did manage to block a provision that would have capped the price of insulin at $35 a month for those covered under private health care plans. Democrats needed 60 votes to waive reconciliation rules and keep that part of the bill, but it failed 57 to 43, with seven Republicans joining Democrats in support of the measure.

House Democratic leaders announced last week the lower chamber will return from its month-long recess on Friday to take up the legislation, which is expected to pass. The package is the culmination of months of negotiations over Mr. Biden's domestic policy agenda, which at times appeared to be on life support but was revived late last month with the surprise announcement of an agreement between Schumer and Sen. Joe Manchin, a moderate Democrat from West Virginia.

While the legislation is much more narrow than the sprawling $3.5 trillion proposal put forth by Mr. Biden last year, the tailored package had the backing of Manchin and Sen. Kyrsten Sinema, a Democrat from Arizona whose support was crucial.

Still, Democrats praise the plan as their answer to addressing rising consumer prices and for its nearly $400 billion investment in fighting climate change, the largest ever. The package allows Medicare to negotiate prescription drug prices, a key Democratic priority that is expected to save hundreds of billions of dollars over the next 10 years. It also extends enhanced health insurance subsidies that were set to expire at the end of the year, and imposes a 15% minimum tax on most corporations that make more than $1 billion each year.

Schumer lauded the bill as the "boldest climate package" in U.S. history, and called it a "game-changer" and "turning point."

One piece of Democrats' drug-pricing plan — imposing penalties on drug manufacturers that raised prices beyond inflation on private insurers — was removed after it was reviewed by Senate parliamentarian Elizbeth MacDonough. Her approval of the rest of the package, however, cleared the way for the upper chamber to move forward with its consideration of the bill.

The Congressional Budget Office estimates the legislation will cut the deficit by $102 billion over the next 10 years. Republicans, though, argued the plan will have little impact on inflation and instead raise taxes while leading to jobs losses.

In an interview with "Face the Nation" on Sunday, Sen. Rick Scott, a Republican from Florida, claimed Democrats' drug pricing plan will harm seniors, while the tax component will increase taxes on Americans.