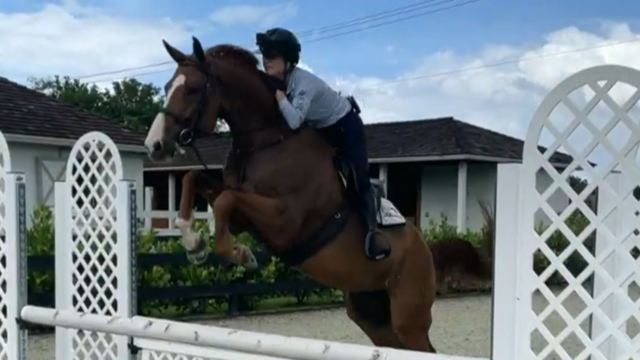 Have you ever seen someone on the back of a 1,200-pound horse jump a fence? Well, Lissa Bachner is doing it blind.

Bachner began losing her vision at a young age, but she didn't let that stop her passion for horseback riding. She and her horse Milo became one of the most inspirational riding teams in the world of equestrian showjumping.

Bachner recently invited "CBS Mornings" to her farm in Wellington, Florida, where CBS News' lead national correspondent David Begnaud had a chance to ride with her. This story is part of our series "Pushing the Limits" — about ordinary people who are accomplishing incredible feats.

Bachner, who started riding at 3 years old, grew up at an equestrian center that her mother owned in Virginia. She's been a champion rider since the age of 5, when she was diagnosed with uveitis, a rare inflammatory eye disease. Her left eye is a prosthetic. As for the right eye, she can only see things if they're very close to her face, though she sees colors very well.

The disease made school difficult, but Bachner said she wasn't lonely because she had horses. And it was her mom who encouraged her to follow her passion to ride.

"Everything good in my life is because of my mother," Bachner said. "My mother knew. As much as she wanted to keep me at home and keep me safe, she bought me a horse."

Bachner never doubted herself, but her fellow competitors did.

"They were making fun of my riding, that I should stop," she said. "I remember looking away from them because I was crying and I remember thinking, 'I am going to kick your ass the next time I get in that ring.' That was when I was determined to figure out how to do it — and better than anyone else."

Milo was an inexperienced horse that Bachner's trainer found in Europe. The "emaciated, mangy creature," as she put it, needed somebody to believe in him, and Bachner did. Not only did Milo carry her over jumps, he guided her through countless mental and emotional obstacles as they traveled the country together, competing and winning.

"We were so in tune with each other and we went for three months where we didn't lose a class," she said.

The pair's extraordinary bond is told in her book, "Milo's Eyes: How a Blind Equestrian and Her 'Seeing Eye Horse' Rescued Each Other."

One day, while she was at the top of her game, she says she misunderstood a conversation between her mother and stepfather that led her to think her competitions were costing too much money. So Bachner suddenly sold Milo.

"I thought it was bleeding everyone dry, I wasn't contributing, it was a lot of money," she said.

In hindsight, she told Begnaud, that was the "worst decision of my life."

But three and a half years later, her mom had a big surprise for her: she bought Milo back.

Together again, Milo carried Bachner to one more victory. It was their last hoorah before Milo died at the age of 17.

Nothing will replace him, but Bachner may have found her next best partner. Now, with less than 5% of her eyesight remaining, she is putting her trust in a new horse she calls Mango. Last month, she and Mango won first in their class at the World Equestrian Center in Ocala, Florida.

At 49 years old, Bachner is riding — and writing — with the intention of helping others.

Asked what message she would share with those who may be inspired by her story, she said, "I would tell them, 'I knew myself well enough to know that I could not exist without the horses and that I had to find a way to continue to ride. There are people who don't give up and don't take no for an answer. And I did not do it myself. I had a lot of help and I have no shame in saying that I asked for help and I got it.'"