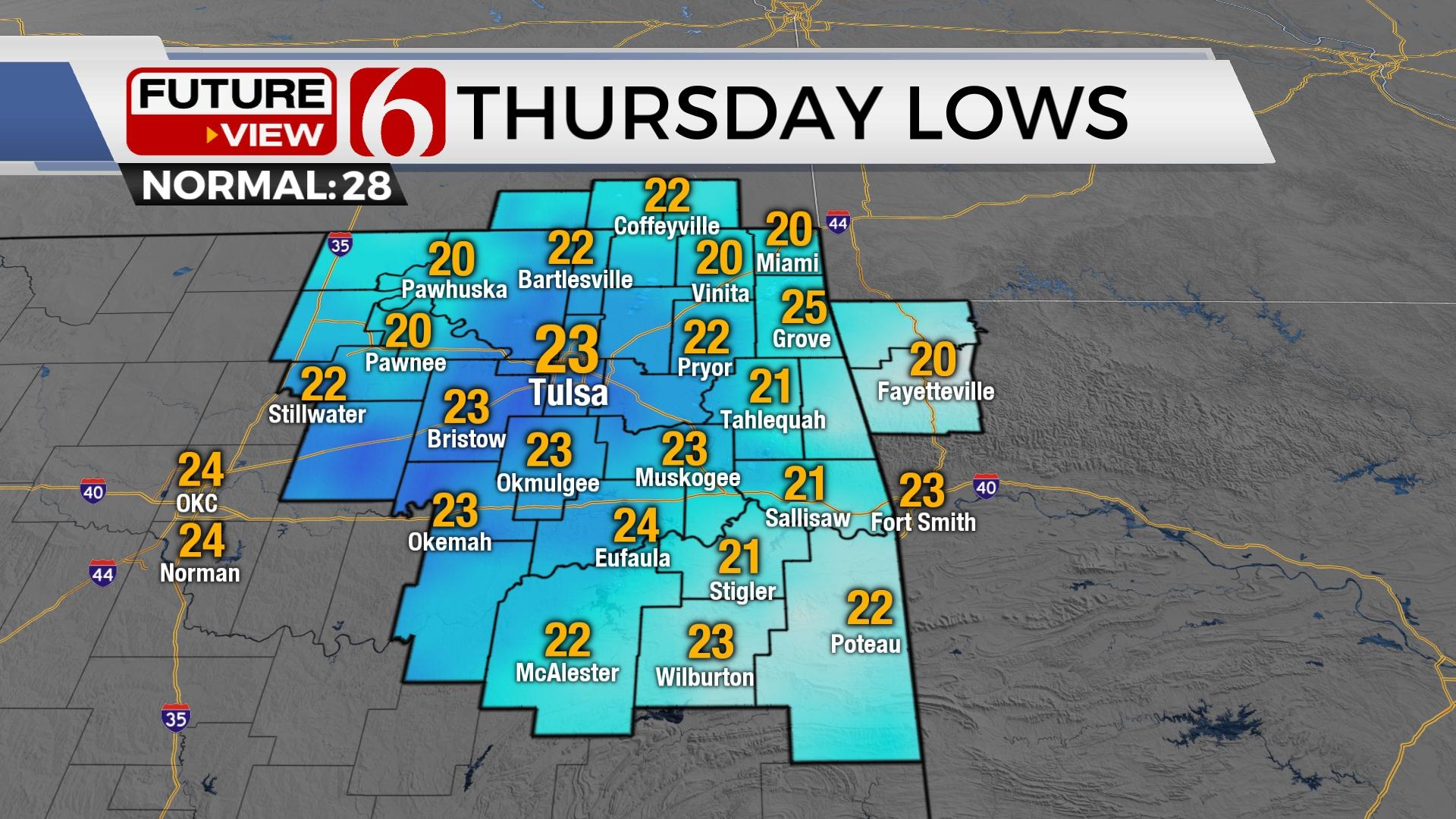 TULSA, Okla. - A cold and windy day is underway after winter weather swept across the state on Tuesday. The back side of the system will bring periods of drizzle and light snow on Wednesday morning before pinwheeling out of the area by mid-morning. Breezy northwest wind gradually increases from 15 to 25 mph by the afternoon with mostly cloudy and cool weather. Afternoon highs should reach the upper 30s and lower 40s. Clearing sky or at least partly cloudy conditions overnight will bring Thursday morning lows into the 20s before reaching the mid-40s with light north winds Thursday. A mini-warming trend begins Friday and Saturday with afternoon highs reaching the mid or upper 50s with increasing south winds at 15 to 30 mph by Saturday afternoon. A strong arctic front should move into the area early Sunday with additional cold air likely next week. The pattern will also bring another storm system near the state with this colder weather nearby which could result in some wintry mix or even icing conditions. Other than some light snow overnight and early Wednesday morning, the Tulsa metro remained mostly rain with this current strong storm system.

The lack of heavier precipitation yesterday early afternoon across the metro kept us from dropping from the upper 30s into the mid-30s. As the main upper-level cold core approached, the narrow layer of these slightly warmer readings never dropped and kept precipitation mostly rain. Locations south and east of Tulsa did see the drop in temperature and consequently pockets of moderate to heavy snowfall. Reports of 4 to 6 inches were common along both sides of I-40 with higher amounts nearing 8 inches across far east-central sections. Higher elevations of the Boston Mountains in northwestern Arkansas reported between 8 to 10 inches of snow. Even locations north of Tulsa received some snow along the Ok-KS state line region. Our next system nears late Saturday evening into Sunday morning as shallow, arctic air attempt to move into the area. The pattern suggests another stronger arctic front will be possible early next week with a storm system also approaching from the southwest. This pattern can bring wintry weather impacts, usually in the form of wintry mix or even freezing rain. We’ll have more about these scenarios soon. A Windy Weekend Before Another Winter System Next Week