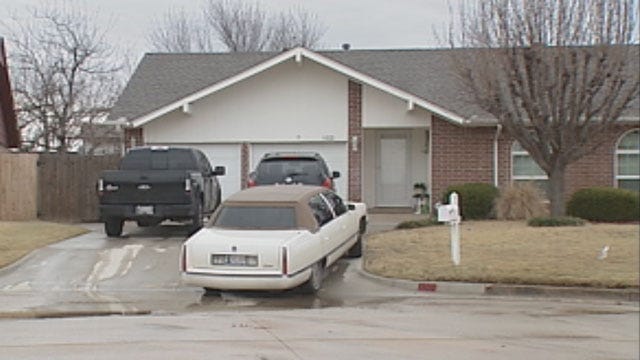 A Moore family is still shaken after ICE agents raided the wrong house.

According to the family, it's a case of mistaken identity, and now they want to make sure it doesn't happen again.

"I don't feel too good," said Carlos Estrada Barrintos. "I don't sleep too good, I wake up like at 5:30 in the morning, you know because it's still in my mind."

It was 5:30 a.m. Tuesday when Carlos Estrada says he got a knock at his door by a team of ICE agents that he and his family will never forget.

"I don't want it to happen with anybody else," said Estrada.

He says his wife, 15-year-old daughter, and 18-year-old son were aggressively handcuffed and sat on the floor of their living room.

"The guy, he was like right here, and he had pictures and he was looking at them and showing us, and they didn't even look like him," said Estrada's 15-year-old son, Isaac.

With guns drawn in the home he's lived in for over 10 years, Estrada says agents realized after about five minutes they had the wrong guy. But he says he was kept in handcuffs for another 40 minutes to be fingerprinted. He says he was even asked for his green card.

"I saw my kids and my wife," said an emotional Estrada.

Carlos says he's done nothing but try to do what's right and obey the law. He's been a legal U.S. citizen since 1988.

"I get my insurance and everything, because I know, I need to respect the laws," says Estrada wiping tears from his face. "I tell my kids every time, you got to do this, you got to do that, we need to be good citizens."

He was told he had been under surveillance by ICE agents for three years and was showed a picture of himself at his job in 2010.

"My understanding is, the subject they were actually looking for was arrested in 2000, 2008," said Estrada's nephew, Eric Martinez. "They would have a little more recent photos compared to what Carlos looks like. They look nothing alike."

"We just don't want that to happen again, mistakes like that," said Estrada.

News 9 has put in several calls to the U.S. Immigration and Customs Enforcement Office and are still waiting to hear back. Meanwhile, Estrada says he is consulting with his lawyer.

On Jan. 8 at about 6 a.m., officers from U.S. Immigration and Customs Enforcement (ICE) and District 21 Task Force in Oklahoma executed a search warrant issued by a District Court judge at a Moore, Okla., residence.

Shortly after entering the residence, ICE officers interviewed the alleged target and noted a discrepancy between the residence owner's social security number and that of the target of the investigation.

Officers conducted an on-site electronic fingerprint comparison which confirmed that the residence owner was not the target of the investigation, even though they both have the same name.

Officers apologized and departed the residence. ICE immediately began investigating this incident, which is ongoing. The investigation into the original target is also ongoing.