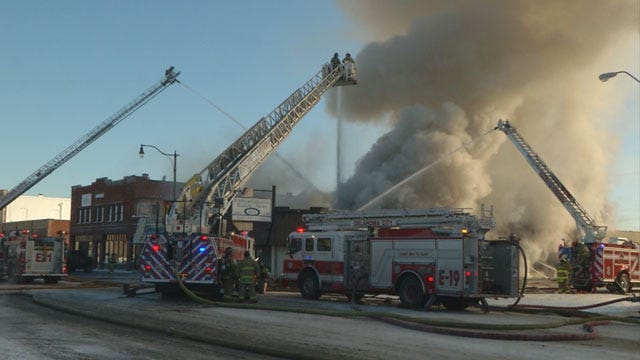 It was a devastating loss in the historic Stockyards City Thursday morning, as two businesses went up in flames. The fire, which started just before 8 a.m., completely destroyed two businesses.

There is still not officially ruling to what caused the fire this morning, but the damage and destruction left two business owners in shock.

The four-alarm fire brought out close to 70 firefighters to battle the flames. The thick smoke filled up the skyline over Stockyards City. Four Ladder trucks flooded the two businesses with water trying to save them.

The fire initially started at Bently-Gafford Ranch Store then spread to a neighboring Native American Gallery.

“It broke my heart because you know it's what I do to pay my rent and pay my bills and everything,” said Victor Gutierrez, Bently-Gafford Ranch Store employee.

Victor Gutierrez has made and repaired saddles at Bently-Gafford Ranch Store since the 1980s. After seeing the fire on TV this morning, he rushed to the store, only to find the charred remains of his saddles.

The destruction brought tears to the neighboring business owner eyes. For her, this is now the third store she has owned that's been destroyed.

“They called us. And they said that the building next door was involved in flames and they tried to go through our building. And then the roof collapsed, so the firemen had to step out.” said Yolanda Whiteantelope, Oklahoma Native Art & Jewelry owner.

She described her store as being a museum home to handmade local art.

“I love this place. This is just a great area. It's very historic and we work hard on building our gallery,” she said.

Priceless, one-of-a-kind treasures are now gone. After four hours of burning, both businesses were a complete loss.

The two stores remain blocked off with tape while investigators work to determine the cause.

A firefighter was taken to the hospital after slipping on ice. He's expected to be okay.