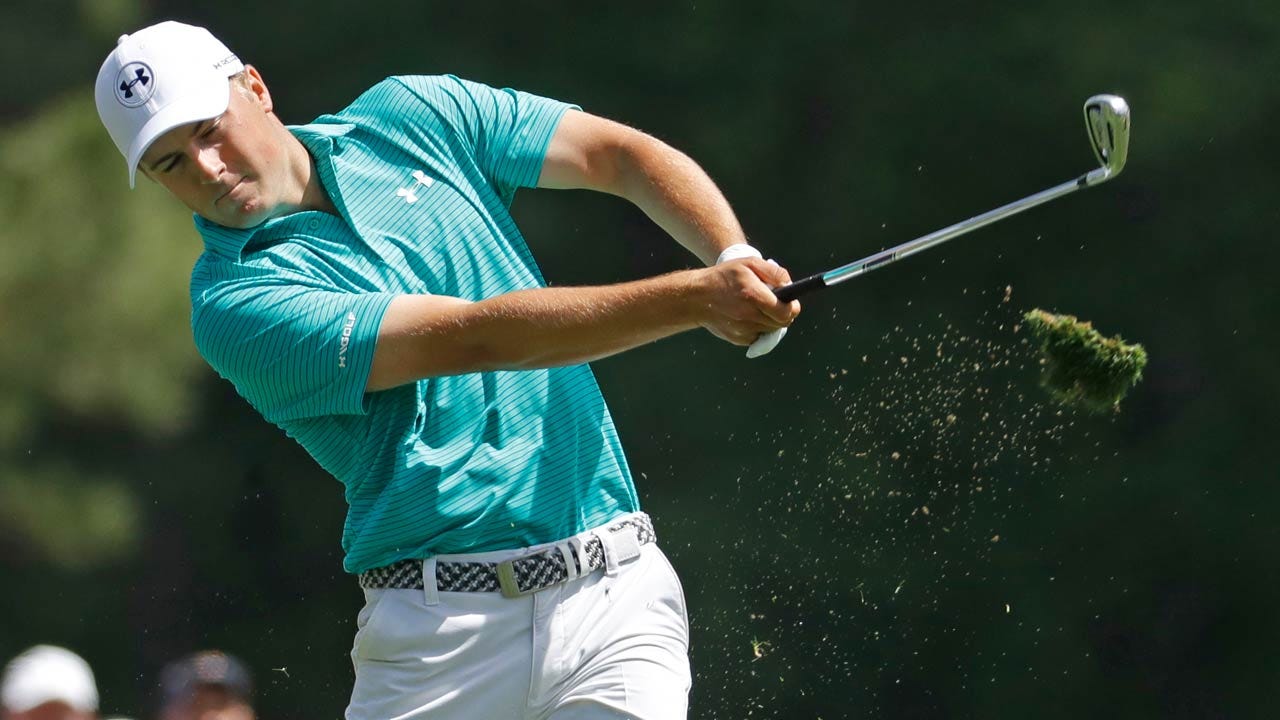 Jordan Spieth picked up right where he left off a year ago.

Just another birdie-filled round at the Masters.

Looking very much like the player who romped to a dominating victory a year ago, the 22-year-old Texan threw up a 6-under 66 on a breezy Thursday at Augusta National to claim a familiar position: the top spot on the leaderboard.

Spieth set a tournament record with 28 birdies in 2015, leading after every round on the way to an 18-under score and his first major title. That sparked one of the great years in golf history, as he went on to capture the U.S. Open at Chambers Bay, just missed out on a playoff in the British Open, and took the runner-up spot behind Jason Day at the PGA Championship.

Day is now the top-ranked player in the world and came into the Masters as the betting favorite. He certainly looked the part playing in the afternoon, shooting a 5-under 31 on the front side to pull within one stroke of the lead.

Don't expect Spieth to shy away from the challenge.

"We just stay patient with what we're doing," he said. "We know how to win this golf tournament."

Spieth rolled in six birdies - all from within 15 feet - and stayed away from bogey with some impressive saves, most notably at the par-3 fourth, where he pulled off a delicate up-and-down from a treacherous side of the green.

After the putt rolled in, Spieth pumped his fist.

"That keeps momentum there," he said.

Even though the course was softened overnight by strong thunderstorms, the wind whipping across Augusta National made it tough to go low. It didn't seem to bother Spieth, who is trying to become only the fourth player to win back-to-back titles.

Among the early finishers, England's Paul Casey and Justin Rose were Spieth's closest challengers, each shooting a 69. Four-time major winner Rory McIlroy, who is only missing the Masters from his career Grand Slam, teed off in the final group of the day.

One big name shot himself out of the tournament on the very first hole.

Ernie Els seven-putted - yep, SEVEN - on the way to a sextuple-bogey 10, the highest score ever on the 445-yard hole known as "Tea Olive." No one had ever posted higher than an 8.

What made the scene even more surreal, Els' first putt was a mere 2-footer for par, and his longest attempt was just 4 feet, the ball rolling back and forth past the cup in a scene that would've made even a weekend duffer cringe.

Then, with his frustration boiling over, the Big Easy carelessly missed from less than a foot with a sloppy one-handed swat.

Rickie Fowler, perhaps the best player without a major title, ruined his hopes as well on Day One.

His opening drive went sailed into the trees, leading to a double-bogey, and he found both the trees and the creek on No. 13, taking a triple-bogey on the par-5 hole that often gives up plenty of birdies and eagles. At the 16th, Fowler dunked another ball in the water, leading to his second double-bogey of the round.

He finished with an 80, his worst score ever at the Masters.

On the 30th anniversary of his sixth and last Masters title, Nicklaus joined Gary Player to hit the ceremonial opening tee shots shortly after sunrise. Arnold Palmer could only watch, having decided not to swing the club this year because of health issues.

The 86-year-old Palmer did ride a cart out to the first tee, offering that familiar wink and thumbs-up. He also posed for a picture with his two longtime rivals and friends, who combined to win seven straight Masters in the 1960s and collectively won 34 major championships.

Player, the 80-year-old South African who said he prepared by doing 1,300 sit-ups and crunches, belted his drive down the middle. The 76-year-old Nicklaus hit it higher and shorter.

"Gary won his tournament this year," Nicklaus said with a grin. "I hit a pop-up."

"I wouldn't be too concerned about me outdriving you too much," Player replied, "because you did it to me for 50 damn years."

But this moment was all about Palmer.

"It was gratifying and sad, because everything shall pass," Player said. "But it was nice to have him on the tee. I dedicated my first tee shot to him in respect. It's a very special moment."

After the original "Big Three" stepped aside, the 80th Masters began for real.