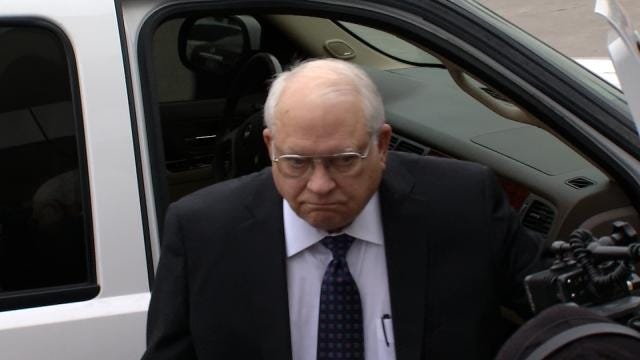 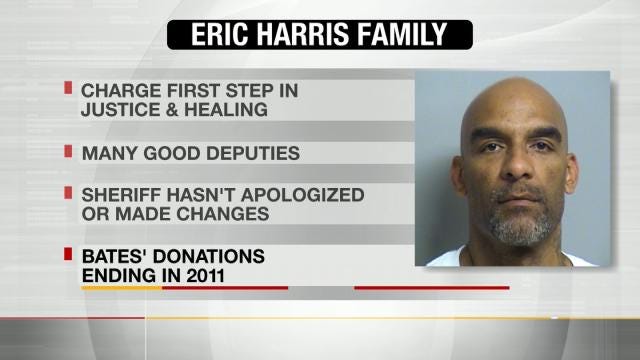 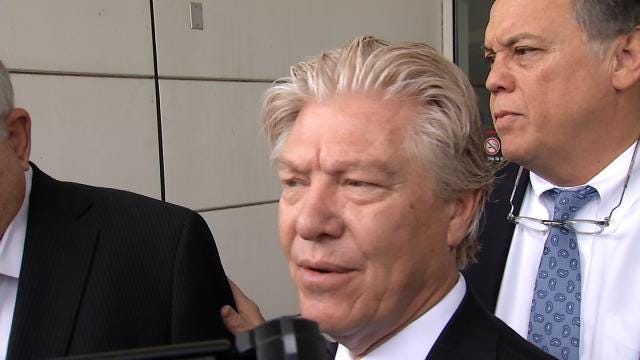 A Tulsa County reserve deputy was booked into jail on a manslaughter charge Tuesday morning.

Bob Bates was surrounded by media when he turned himself in after the district attorney charged him with 2nd degree manslaughter in the death of Eric Harris.

4/14/2015 Related Story: Tulsa Reserve Deputy Turns Himself In For Manslaughter

It took about 15 minutes for Bob Bates to be booked into jail and released. He was bonded out on a $25,000 bond, that amount is set by state law for a manslaughter charge.

Bates has always maintained Harris' death was an accident and that he meant to grab his Taser, but in the stress of the fast moving situation, he pulled his gun by mistake.

"We are going to defend this in a court of law and when he has a chance to speak at the conclusion of this case, he will do so," said Bates' attorney, Clark Brewster.

Records show Harris is an ex-con who was caught on tape, moments before the shooting, selling a loaded gun to an undercover deputy.

The sheriff's office said Bates was stationed blocks away from the sting operation and the arrest team. They said Harris ran in that direction and was taken to the ground near Bates' location.

"I shot him, I'm sorry," you can hear Bates say in video footage.

Another tape shows representatives from the sheriff's office met with Harris' brother, Andre, the next day.

Deputy: "I'm sorry for your loss, I really am. It's a tragedy."
Andre: "I got about two hours of sleep, I still have yards to cut, I've got to plan a funeral, I've had better days."

We are pleased that the Tulsa County District Attorney has filed second degree manslaughter charges against Robert Bates. We applaud the District Attorney for his courage in taking the appropriate action based on the facts and the law.

The filing of criminal charges against Mr. Bates is a necessary first step on the road to justice and for our family's healing process. At the same time, we know that there is a long road ahead. There remain many unanswered questions. And we will continue to fight until those questions are answered. We will continue to fight until justice is realized.

We want to reiterate that there are many good deputies employed by the Tulsa County Sheriff's Office ("TCSO") who perform their jobs in the right way. However, the treatment of Eric on April 2 clearly shows that there is a deep-seated problem within the TCSO. Sheriff Glanz's recent public statements also make it clear that he does not even see the problem, and has no plans to change the practices within the TCSO. While Sheriff Glanz acknowledges that an "error" was made when Eric was killed, he has yet to even apologize to our family. Sheriff Glanz has not addressed the callous statements made by a deputy to Eric after he had been shot, such as "shut the f**k up" and "f**k your breath". We have not heard Sheriff Glanz address the deputy who forcefully grinded Eric's head into the concrete with his knee while Eric was in need of emergency medical attention. We have yet to see any remorse on the part of the TCSO, or any indication that it is going to change its policies. The way in which Eric was treated by TCSO, and Sheriff Glanz's failure to recognize the problem, increases the disconnect between law enforcement and ordinary citizens. We believe that the leadership within the TCSO is flawed, and that all of Tulsa County deserves better.

It is our mission to continue to fight on in Eric's memory until real and lasting changes are made. We want this to be Eric's legacy. Again, we asked that you all pray for justice and peace.

They acknowledged many good deputies work for Tulsa County, but are frustrated Sheriff Stanley Glanz has not apologized to them or indicated his plans to make policy changes.

Harris' family has raised concern about Bates' donations to the sheriff's office, including six vehicles, a camera, computer and radio.

"That's a surprising thing. They've taken the fact this man has been good to the community, has been benevolent to the community and has been a great citizen to our town and made it something bad, or sinister, and that's the unfortunate thing," Brewster said.

Bates' attorney said they are done talking about the case. They said they will issue anymore statements, and that from now on they'll be doing their talking in court.