WEB EXTRA: Video Of Giant Pipe Rolled Off I-244 Near Lewis 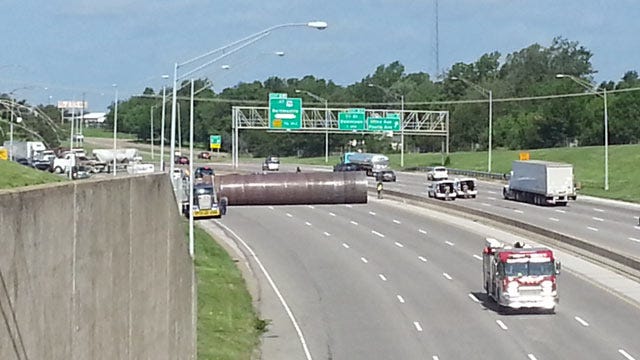 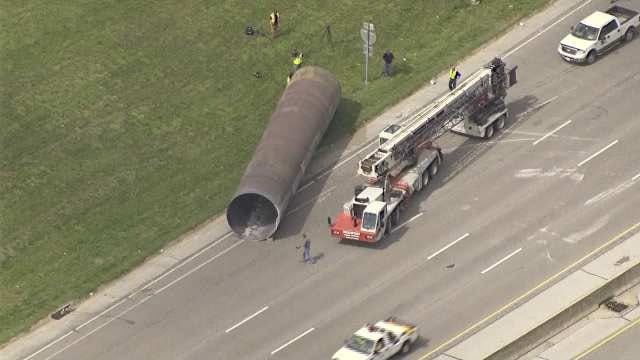 The Oklahoma Highway Patrol cited the driver after a giant pipe fell off his truck Wednesday morning and blocked all four lanes of eastbound I-244.

It happened at about 9 a.m. The Oklahoma Highway Patrol closed all eastbound lanes, diverting traffic off the highway at the Utica exit. It re-opened the left eastbound lane at about 10:30 a.m.

The pipe -- ten feet in diameter, 43 feet long and weighing 50,000 pounds -- hit the concrete divider between the eastbound and westbound lanes, then came all the way off the trailer and rolled about a hundred feet before coming to a stop blocking all four eastbound lanes.

A witness told News On 6 the back end of the pipe came off the truck and hit the divider, causing a huge cloud of dust and blocking all visibility which caused traffic to stop. As the cloud started to clear the witness saw the truck coming to a stop and the pipe still rolling down the highway.

No one was hurt, but there is extensive damage to the concrete divider and a lot of debris in the roadway in both the eastbound and westbound lanes.

Trooper Darrick Eades, with the Oklahoma Highway Patrol, said, "It's amazing, especially this time of day with the traffic and the multi lanes, so we're very fortunate that no one else was involved and no one was injured."

Tulsa Police and the Oklahoma Highway Patrol shut down all eastbound traffic, then allowed the vehicles right behind the pipe to drive westbound in the eastbound lanes in order to get off the highway.

Right after it happened, it left a huge cloud of dust and piles of big chunks of concrete in the path of oncoming traffic, but ODOT didn't get a single report of a car being hit.

It took hours to get the pipe moved out of the way and eventually lifted back onto the truck.

Oklahoma Highway Patrol troopers say a wooden structure on the trailer designed to support the pipe from underneath collapsed and that allowed the chains to come loose. They cited the driver for failure to secure the load.

"Driver stated that his chains broke, causing the load to shift and actually come off the trailer causing damage to the center median wall and we had a lot of debris go over into the westbound side," said Martin Stewart with ODOT.

The truck is owned by Stone Trucking, from Kiefer. They're a major freight hauler, with 83 trucks covering more than 5 million miles a year.

According to federal regulators, their safety record is about average for the industry, with only a few accidents, but several citations for speeding and hauling improperly secured loads. The last citation for that was in Texas one month ago.

Oklahoma law is clear that trucks shouldn't move, unless the load is securely fastened, to prevent a hazard to other drivers. It also states haulers are "responsible for all damages to highways and pavement as a result of negligent or improper operation.