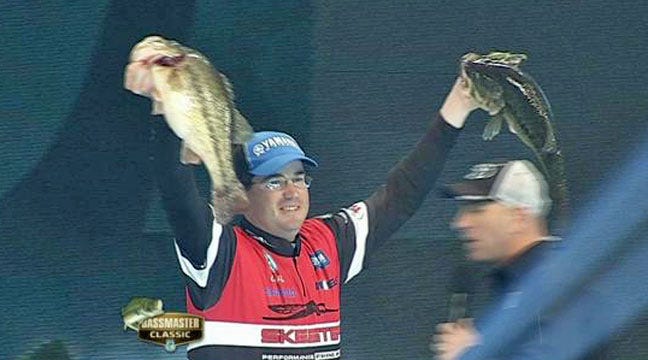 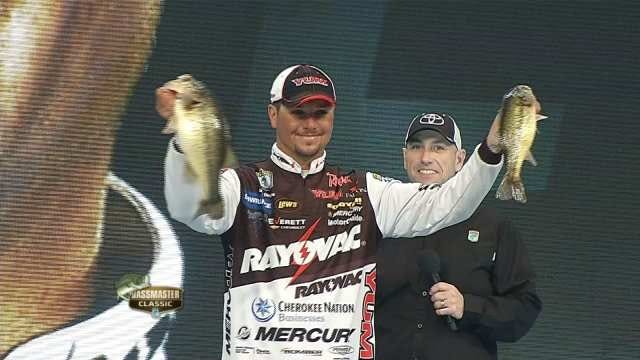 The world's 53 best anglers fought through tougher conditions on day two of the Bassmaster Classic. The lack of wind led to generally smaller totals Saturday, but there were still some very impressive fish on display.

The fire marshal had to turn people away when a capacity crowd showed for weigh-ins at the BOK Center.

Jason Christie from Park Hill is the leading local angler, bringing in 12 pounds, 9 ounces on day two. Idaho native Brandon Palaniuk held the lead for most of the day. He's second overall with a two-day total of 36 pounds, 4 ounces.

But the entire field is chasing Petal, Mississippi's Cliff Pace. The day one co-leader reeled in five fish for 21 pounds, 12 ounces. He leads by 7 pounds heading into the final day.

Pace's two-day total is 43 pounds, 4 ounces. It's his fifth time to fish in the Bassmaster Classic but he's never won. He came in second in 2008.

"I didn't fish differently today all," he said. "For me, it's been all about committing to the way I can catch the big ones. I took a big, big risk to do that."

Mike Iaconelli, the day one co-leader is third. He lost about an hour of fishing time due to the failure of two trolling motors, he said.

Jason Christie is in fifth with 31 pounds, five ounces. Christie is a veteran of many Grand Lake tournaments.

"Yesterday I had 18 pounds on seven bites, and today I had 12 pounds and had seven bites," he said Saturday. "You don't know where you're going to catch a big one."

Christie said his big challenge is to resist "fighting history," or thinking he knows the area so well that he resists leaving places that have been productive in the past.

Other Oklahomans: Edwin Evers is 20th and Wagoner's Tommy Biffle the last man to make the cut in 25th.