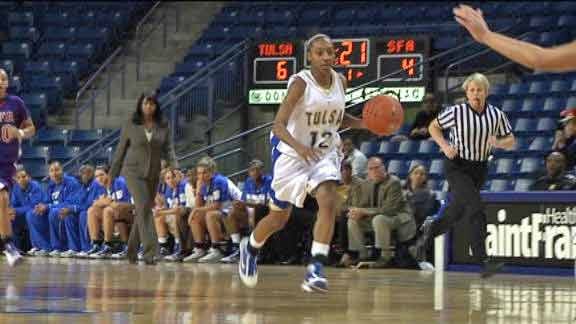 Six Tulsa players scored in double figures to lead the Golden Hurricane to a 97-35 win over Langston in the final non-conference game on Thursday night at the Donald W. Reynolds Center. TU's 97 points was just shy of the school record (98) set against East Central Oklahoma State in 1980. Tulsa moved to 5-8 on the season, while the Lions fell to 2-9 overall.

"Going into the game, we felt that if we could get a lead it would give us an opportunity to play some of our players that don't get a lot of playing time," coach Matilda Mossman said. "Antoinet and Jasmine got more playing time, and the lead gave us an opportunity to start Mariah in the second half and for her to play with Loren longer than usual."

Taleya Mayberry led the Hurricane attack with 20 points, followed by Kelsee Grovey with 17, Loren McDaniel with 12, Ashley Clark and Mariah Turner with 11 points each, and Jasmine Vasquez added 10. Vasquez set a new personal scoring best, while Grovey tied her previous mark of 17, which she set against Illinois earlier this season.

The Lions were led by Victoria Felix with 18 points and 10 rebounds while Tela Wilcox-Pugh added eight points.

Tulsa returns to action in the Conference USA opener on Wednesday, January 9th against UTEP. Game time is set for 7:00 pm at the Reynolds Center.