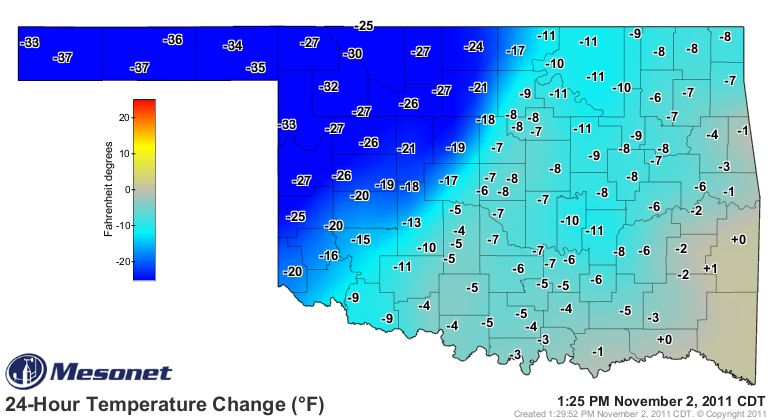 Notice the map on the right courtesy of the OK Mesonet. By the way, we are extremely fortunate to have such an organization here in Oklahoma. The depth and breadth of information they provide is just not available in any other state. Anyway, the referenced map is showing the 24 hour temperature change as of early this afternoon. It is obvious some much colder air has moved into the NW part of our state and is heading on eastward.

Strong southerly winds ahead of the front will be replaced by even stronger NW winds behind it as it goes through your location. With the wind shift comes the falling temperatures shown on the map and most of us should be in the 40s by the 9 or 10 PM time frame and in the 30s to start the day on Thursday. That will be quite a change from the 60s to near 70 of the last few days.

The wind shift will also be accompanied by a good chance of rain and some thunder. Instability remains very limited but the very strong wind fields at the surface and aloft and the strong lift generated by the front itself may be enough to create a few locally strong storms. A cold rain behind the front will be quickly ending overnight as everything translates rapidly on eastward. During the transition there remains a remote chance of some brief snow flurries along the OK/KS state line later tonight. Total rainfall still looks to be on the order of ¼ inch for most locations with some locally heavier amounts possible.

Gusty NW winds and temperatures in the 30s first thing Thursday morning will put wind chill values down into the 20s and possibly even the teens for some locations. Those gusty winds will be subsiding by evening and with sunny skies temperatures should make it into the mid 50s. Friday morning still looks like it will be near freezing with a widespread frost to start the day but with a return to southerly winds and a moderating trend to end the day.

The weekend will be milder with southerly winds now expected to last through Sunday. A weak boundary that was expected to be in the area does not now appear to have enough support to reach EOK. However, the southerly winds and a return of moisture could result in some scattered showers for Sunday with better chances of rain now expected for early next week. Whether or not the system next week will be a drought buster is still in question. So, don't want to get anyone's hopes up too high, but the longer range guidance has been consistently showing the potential for this system to produce some widespread, beneficial rains for much of our state. We will see as that is certainly subject to change between now and then.