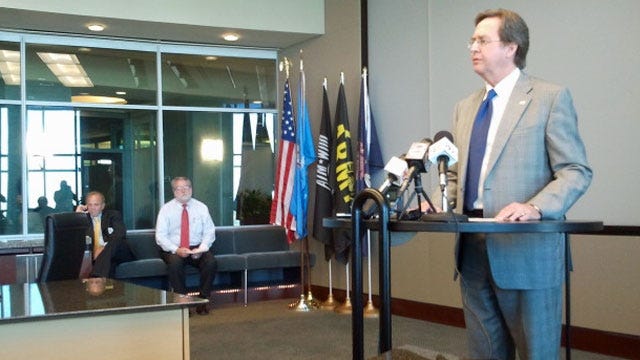 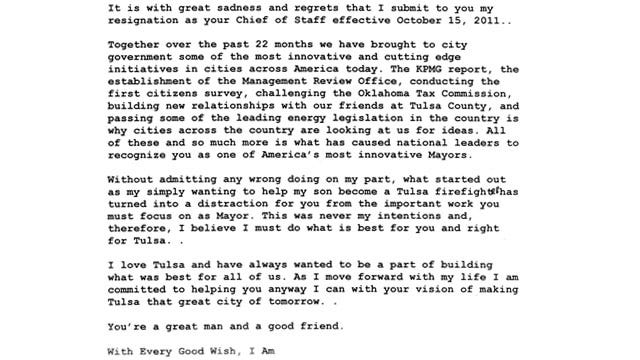 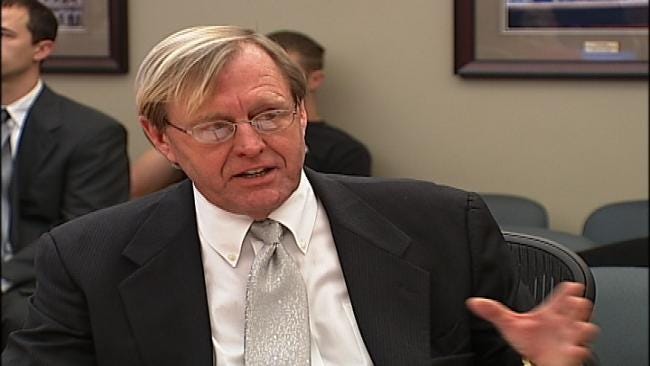 TULSA, Oklahoma -- Mayor Dewey Bartlett's Chief of Staff Terry Simonson resigned from his position Thursday. Bartlett made the announcement during a press conference Thursday afternoon and said it was effective immediately.

According to emails from city hall, Simonson asked Fire chief Allen LaCroix to advance his 30-year-old son in the hiring process for the fire department.

According to those emails, LaCroix agreed to it - over repeated objections from the people running the application process.

Simonson emailed the fire chief: "If you can find a seat for him I'd appreciate it."
Chief LaCroix emailed his staff: "Let's put him in."
But human resources staffer Lori Hannon objected: "And what do I tell all the other people that call?"
But LaCroix insisted: "Add him."
She objected two more times, saying: "I don't think it's appropriate. You know I disagree but you are the Chief."

"Based on the emails that we've all read, there was some serious evidence against him. I'm sure he's done what he thinks is best for his family and the citizens of Tulsa and I respect that," said Tulsa City Councilor City Councilor Rick Westcott.

Simonson was at odds with the City Council from the beginning - and stopped going to their meetings a long time ago to avoid the arguments.

"And he's got that in your face style that probably works great in the courtroom, but in politics and this environment, it doesn't work very well," said City Councilor Chris Trail.

Mayor Bartlett had placed Simonson and Fire Chief Allen LaCroix on administrative leave, with pay, effective last Monday at 6 p.m. while the mayor's specially-appointed committee looked into the situation.

Bartlett says Simonson's character is "top notch" and that his resignation was "freely offered." Simonson said he was a lightning rod of controversy from day one.

One Tulsa City Councilor reacted to the news by saying it's good for Tulsa. The mayor responded by saying, "Give him a break, he's got a family. He's a good man."

The role of Terry Simonson in the Bartlett administration almost cannot be overstated.

He was the point man for virtually every major initiative, especially the efficiency audits, and budget cuts that marked some of the low and high points of Bartlett's term.

Bartlett has a committee looking into the actions of the fire chief and said he hoped to get some word from the committee Friday.