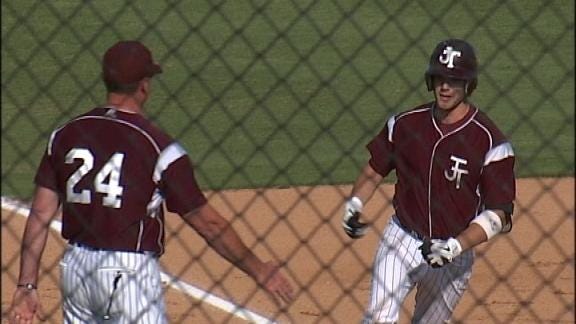 JENKS, Oklahoma -- The Jenks Trojans are going to the state tournament. The Trojans blasted Bixby in the 6A Regional Baseball championship game Friday afternoon 13-9. Jenks exploded for seven runs in the fifth inning.

Trailing 4-0 after the first inning, Jenks chipped away with a run in the second, two in the third and three in the fourth inning to pull even with Bixby 5-5. Then, the fireworks went off.

Two Trojans scored on a throwing error by Bixby catcher, Dylan Delso. Another run came in on an error by the short stop. A past ball let in another Trojans run before Matt Brauer launched a towering fly ball over the left field wall to cap the scoring for the Trojans.

After Bixby moved a man to third in their half of the fifth, a would-be sac fly to right field for the Spartans turned into a highlight for the Trojans. Derek Brumble unleashed a rocket to catcher Eric Kanady to gun down the Bixby runner at the plate to end the inning.

The crowd cheered as the Trojans congratulated each other on the win in the dugout.