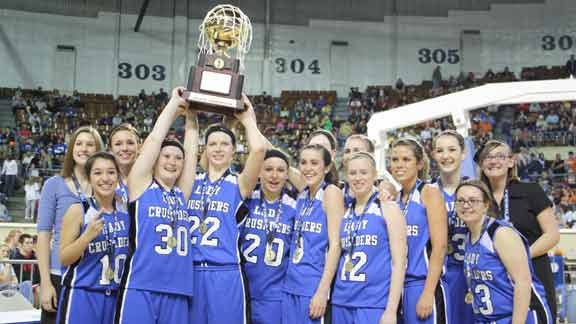 Led by head coach Terry Fellenstein, the Lady Crusaders took an early 12-4 lead midway through the first quarter and never looked back.

Juniors Taylor Smith and Jessica Penner were both stellar, scoring 50 of the teams 65 points.

Hammon struggled to get going in the first half and was laden with poor shooting and turnovers.

Corn Bible led by as many as 21 points and went to the locker room at the break with a 26-14 lead.

By the third quarter the Lady Warriors were 0-15 from the three point, but that would soon change.

The Big House was rockin’ in the fourth quarter and fans were on their feet as Hammon chipped away at the deficit.

Hammon came out on an inbounds pass and hit its first of six three point baskets to pull within five points.

The tide would shift back in the favor of Corn Bible with 3:12 left in the game when Hammon junior Lexie Brown fouled out of the game.

This is the first girls basketball state title for Corn Bible who finish the season at 23-8.

Penner led all scorers with 27 points while Smith totaled 23.

Hammon was led by sophomore Payton Walker who hit four three pointers in the fourth quarter to finish with 20 points. She was helped by fellow sophomore Kori Barrios who scored 18.

Hammon, the number one ranked and previously-undefeated team finishes the season at 29-1.