Graham Advances With Win over Duke in Thriller 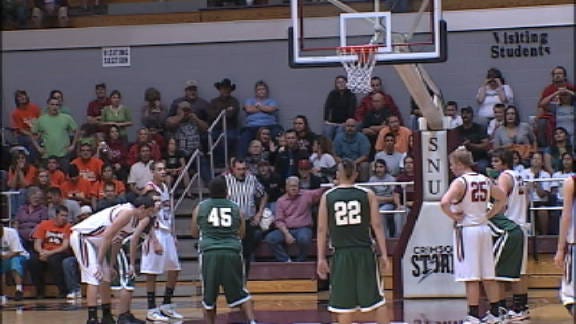 OKLAHOMA CITY – The Graham Chieftains made their first appearance in the state tournament since 1961 Thursday, and they made it a memorable one.

The Chieftains hit clutch shot after clutch shot in the closing minutes and withstood a wild ending to beat the Duke Tigers 54-51.

Graham trailed 49-45 with 2:30 left in the game, but hit a 3-pointer to pull within one. Kevin Rice hit a running jumper on the ensuing possession to extend the Duke lead back to three, but Graham responded with another 3-pointer from Trae Morgan to tie the game with time winding down.

The Tigers threw the ball away on their next drive, giving Graham a possession to potentially win it with 45 seconds left in regulation.

After the Chieftains passed the ball around the perimeter to run the clock, Jeremy Sands heaved an off-balance shot that found nothing but air. But teammate Seth Gambler grabbed an offensive rebound and drew a foul to go to the free-throw line.

With fans screaming so loud it shook the arena, Gambler missed his first shot from the line. His second bounced off the rim straight into the air before combing back down and finding the net to put Graham on top.

On the next possession, Duke’s Kale Thompson tried to rush down the court for a final shot. But he lost control of the ball and then committed a loose-ball foul, sending Morgan to the line. He hit both his free throws, giving the Chieftains a three-point lead.

Duke called a timeout, but still had to advance the length of the court in three seconds. The Tigers attempted one final heave from half court, but it landed well wide and gave Graham the win.

The Chieftains will now advance to face Red Oak at 10:30 a.m. Friday at the Oklahoma City Fairgrounds. Red Oak defeated Burlington 57-43 in the first game of the day Thursday.

Graham Advances With Win over Duke in Thriller