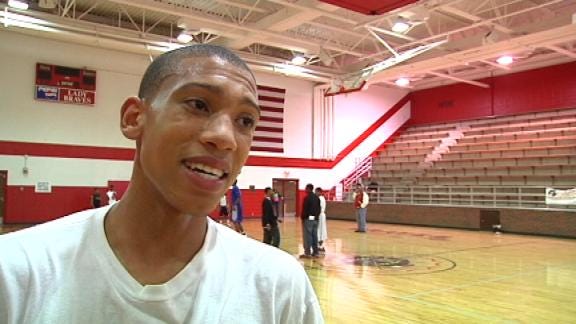 TULSA, Oklahoma – Change is here for the Tulsa Central Braves boys’ basketball team. Senior leadership is gone, their old coach is gone, and the players hope another disappointing season is a thing of the past.

“We have more athletes this year than we had the last two years at Central,” said junior guard Ryan Devers. “I think we have a better chance of winning with the players we’ve got.”

Those players are young. The average age on this season’s roster is 16. That youth could prove to be a good or bad thing as the season wears on. After finishing with a 13-12 record a year ago, the program got the shake up many thought it needed. Kyle Cudjoe stepped in as the head coach for the Braves, and has already left an impression on his new players.

“He’s kind of quiet,” said junior forward Corey Frazier. “He knows basketball.”
“(When you’re new) you have to get to know the kids and the community,” said Cudjoe, who has a handful of family members also coaching in the state. “I’ve been pleased with the support and the attitude of the kids.”

Offense should be no problem for Central. Both Frazier and Devers insist that this year’s squad can shoot with anybody. Defense, however, could be the weak link in the Braves’ armor.

“We have a lot of young guys who like to play around, and we don’t have time for that,” said Frazier. “We have to work on our defense every day in practice.”
His head coach agrees.

“We’ve got to be able to do the little things,” said Cudjoe. “You can’t win games night in and night out shooting the perimeter jump shot.”

The Braves get a chance to test that defense against some steep competition this weekend in the Bishop Kelley Classic. Central and Cascia Hall tip-off the tournament at 4 p.m. Thursday, and the winner will be crowned Saturday night.