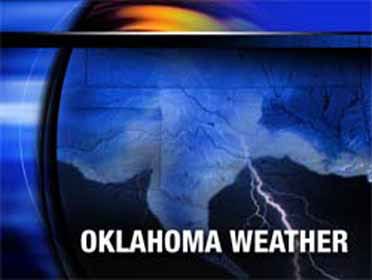 Oklahoma could be in for some rocky weather as the threat of severe storms returns to the forecast.

The National Weather Service said thunderstorms could be ongoing in parts of western Oklahoma early Thursday.

An area stretching from Archer City, Texas, northward to Frederick, Clinton and Woodward in Oklahoma would see a slight risk of severe storms through 1 a.m., the weather service said.

Later in the day, storm chances will be enhanced as a dryline, or a boundary between moist and dry airmasses, sets up in the Texas Panhandle and moves into western Oklahoma and western North Texas, forecasters said. Large hail, damaging winds and tornadoes may occur if a cap, or warm air several thousand feet above the ground, is broken by increased moisture and winds, the weather service said.

On Wednesday, skies were clear to partly cloudy and temperatures ranged from 78 degrees in Muskogee to 92 degrees in Frederick. The mercury peaked at 80 degrees in Tulsa and hit 82 degrees in Oklahoma City, Ponca City and Stillwater.

Skies should be partly sunny Thursday and Friday, with a chance of showers and thunderstorms statewide on Thursday, and a slight chance of storms in southwestern and northeastern Oklahoma on Friday.

Temperatures should top out in the 80s and 90s both days and range from the 50s in the Panhandle to the low 70s in southeastern Oklahoma, Thursday night.

Mostly cloudy skies are expected Saturday and Sunday, as is a slight chance of showers and thunderstorms across the state on Saturday and Sunday. highs both days should reach the 80s and 90s and lows should fall into the 60s and 70s Saturday night.

Lows on Sunday are expected to range from the 50s in the Panhandle to the low 70s in the east, forecasters said.

Skies should become partly cloudy on Monday. There will be a slight chance of showers and storms in the Panhandle and northeast.

Highs should reach the 80s and 90s statewide and lows should fall into the 60s and 70s.